Can reach speeds of over 40 mph!

Click through all of our Hare images in the gallery. 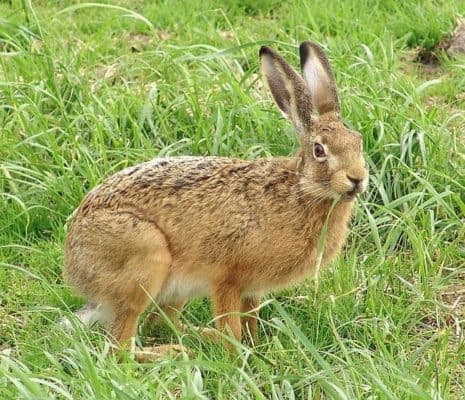 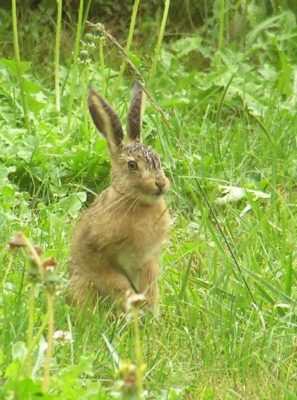 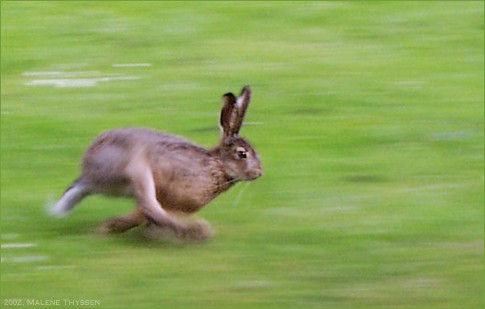 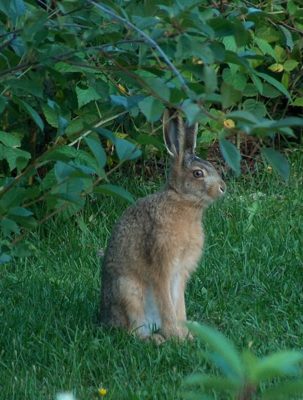 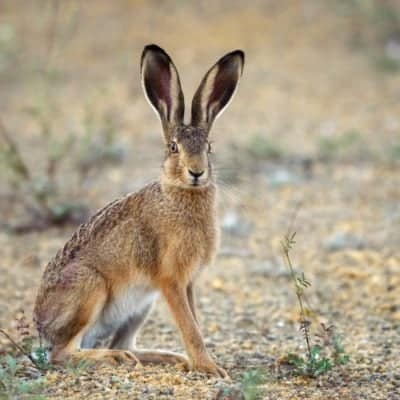 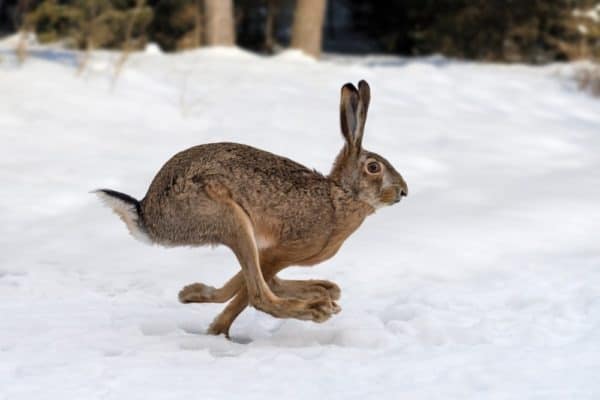 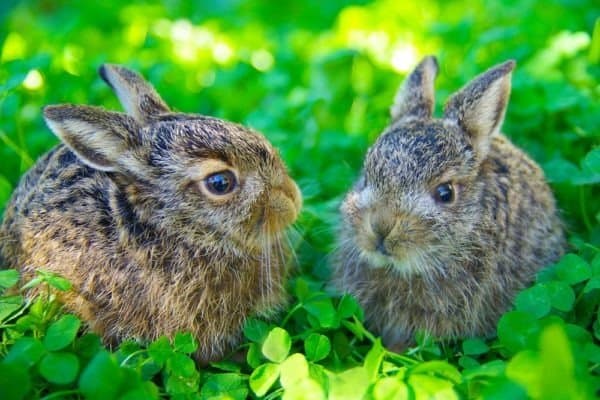 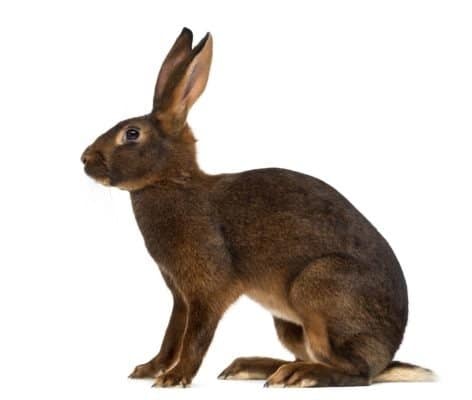 View all of the Hare images!

The hare is one of the fastest land mammals in the world.

This speed is absolutely critical to its survival. Lacking any other formidable defenses at its disposal, this small and timid animal can outrun predators with incredible bursts of speed and endurance. The hare is a very common sight, but many fall victim to ferocious predators or human hunters before they can die of natural causes.

The hare is not a single species, but rather an entire genus known as Lepus (which is the Latin name for the hare). As you might already know, genus is the level of scientific classification directly above species. There are approximately 30 species within the genus Lepus. There is quite a bit of popular confusion between the terms hare, jackrabbit, and rabbit. Hare and jackrabbit are interchangeable terms that describe the same thing, but the term rabbit applies to a different genus of animals entirely. More confusingly, five species of rabbits are actually called hares, including the endangered hispid hare of Nepal and the red rock hares of Africa.

Hares and rabbits both belong to the same family of Leporidae and the order of Lagomorpha (although they were once considered rodents). The main differences are the hare’s larger ears, more solitary lifestyle, and the tendency to bear young above ground rather than in burrows. Because of the young lack protection, they must be ready to fend for themselves immediately after birth. Another difference is that with their longer muscle fibers, hares are better suited for long-distance running.

These animals have a rather distinctive appearance characterized by their extremely long ears, long hind legs, short snout, big eyes, and stout body. They are typically adorned with white, black, gray, tan, or reddish-orange colors to blend in with the surroundings. Some species turn white during the winter months or remain white all year long as a form of camouflage in the snow. In order to change color, these hares molt in the spring.

Hares are the physically largest animals in the order of Lagomorphs. They are even larger than the closely related rabbits and the pikas. Measuring about 16 to 28 inches from head to tail, they are a little larger than the typical house cat. The body is complemented with 6-inch feet and 8-inch ears. The heaviest species is the arctic hare at around 11 pounds. The male is known as a jack, while the female is called a jill. Both are fairly similar in size and appearance, though females do tend to be a little larger, which is uncommon for a mammal.

These solitary animals tend to form in small pairs or family units called a drove. The only time they will congregate among other hares is to find an appropriate mate. Unlike rabbits, they tend to live exclusively above ground. If they need to seek out safety, then they will usually hide in grasses or shrubs.

Although they may not look it, hares are physically remarkable creatures with a finely developed sense of hearing, smell, and vision. Their wide angle of view allows them to detect predators coming from anywhere around them except for a small blind spot in front of their noses. They also produce pheromones from scent glands, which might play a role in mating. Some species are capable of short bursts of speed between 40 and 50 MPH and more consistent speeds of around 30 MPH. Thanks to their powerful hind limbs, they can leap 10 feet in the air. They are also excellent swimmers that can traverse rivers and large bodies of water without a problem.

The hare has impressively huge ears. In relation to body size, they are perhaps the largest among all living mammals. It is believed that they have long ears for two different reasons. First, the ears allow them to hear sound from almost any direction. Second, the ears serve to dissipate body heat and keep the hare cool, especially during the warmer months of the year. This is essential for the animal’s survival since these animals cannot sweat or pant to work off heat. In fact, when light shines through the ear, you can sometimes see the dense patchwork of blood vessels inside of it that will swell in the heat to lower body temperatures.

These animals occur naturally throughout Europe, Asia, Africa, and North America. Because of the large number of habitats to which this genus has adapted, each species inhabits a different geographical range. The snowshoe hare is a well-known species that occurs from Alaska to the mountainous regions of California and Nevada. The African hare, as the name implies, inhabits much of Africa. The arctic hare is one of the few species adapted for the frigid extremes of northern Canada and Greenland.

The European hare — which inhabits Europe, the Middle East, and as far east as Siberia — is perhaps the most common species of hares in the world. In recent centuries, it has been introduced into Australia, New Zealand, South America, and parts of North America as hunting game. But after spreading out of control, the species is now considered a pest in many parts of the world, as it consumes crops and outcompetes local species.

Wherever it’s found, these animals prefer to inhabit open plains such as meadows, grasslands, deserts, tundra, and savannas. Although this sometimes exposes them to predators, their remarkable speed often allows them to get away even in relatively flatlands. If they need to hide, then hares will conceal themselves in the grass, shrubs, or hollows. Only a few species live in more forested regions.

Hares are herbivorous animals that mostly consume grasses in the wild. This is supplemented with nuts, fruits, vegetables, and fungi. Composed of tough cellulose, grass is extremely difficult to digest. Because these animals lack the multi-chambered stomach of cattle, deer, and other ruminants, it is believed that they have evolved to eat their own droppings, which contain many undigested nutrients. This gives them a second chance to digest whatever nutrients remain in the food.

Hares are the natural prey of many large cats, birds, and reptiles around the world. The snowshoe hare is the most common prey animal of the powerful lynx. This species goes through an unusual boom/bust cycle in which numbers crash from overhunting and then slowly begin to recover. This cycle takes place over a regular eight to 11-year time span. Meanwhile, both the brown hare and the European hare are the prey of the fox. Other common predators include bobcats, hawks, eagles, snowy owls, wolves, coyotes, bears, and even weasels.

The hare has traditionally been a common source of food for people, and they are still among the most hunted animals today. Most of this hunting is responsibly done. However, an even greater threat is habitat loss and fragmentation, which has caused numbers to decline around the world.

The hare’s breeding season is quite competitive and feisty. Males will fight each other for access to females, while the female will force the male to chase her as a test of his stamina and determination. This also serves the purpose of helping the animal to stay fit. If the female is not ready to mate at all, then she may box the male right across the face with a stern punch. The hare’s breeding season varies quite a bit by species. Some species can breed at any time throughout the year, while others only breed during the spring and summer months.

Both hares and rabbits have a reputation for a prolific rate of reproduction. The female can typically produce one to eight children in a single litter (rarely up to 15) with up to three litters per year. The amount of young usually depends on the abundance of food. The mother will typically carry the children for around 40 days. Hidden in large grasses or depressions, the young hares, also known as leverets, are born with their eyes open and their fur completely grown. They are able to begin hopping within minutes of emerging from the womb. This is because they won’t have the protection of a larger group. The mother herself only visits the children once every day for very short periods, usually to nurse them.

Weaning usually begins around 10 days of life and lasts up to 23 days. Although they are functionally independent soon after birth, sexual maturity takes about one to two years in most species of hares. The typical lifespan is between four and eight years in the wild. If a hare avoids disease and predation, then the maximum possible lifespan is around 12 years.

The majority of hare species appear to be in relatively good health. According to the IUCN Red List, which tracks the conservation status of many animals, most hare species are currently classified as least concern. A few species, like the Corsican hare, the white-sided jackrabbit, and the black jackrabbit, are vulnerable. The Hainan hare of Hainan, China, and the Tehuantepec jackrabbit of Mexico are both endangered to extinction. Exact population figures are not available, but some species appear to be declining from agriculture and other habitat loss.

What is the difference between a rabbit and a hare?

Rabbits and hares are sometimes hard to tell apart, but you can identify a hare by its larger size, huge ears, and tendency to live in pairs instead of large groups. Another difference is the tendency to bear young above ground rather than in burrows. Hares also produce offspring that can survive on their own from the moment of birth.

Can hares mate with rabbits?

Despite their similar appearances, hares and rabbits are not genetically compatible. Too much time has passed on an evolutionary scale since they shared a “last common ancestor” from which both lineages split off. They also have a different number of chromosomes, which makes them completely incompatible. To understand why this is the case, just consider this fact. A species is typically defined as a discrete breeding population capable of producing viable offspring with each other. By comparison, hares and rabbits occupy entirely different genera. It would be the difference between, say, a domesticated cat and a tiger.

Can you have a hare are a pet?

Unlike rabbits, hares have not been domesticated by humans and wouldn’t make for very good pets. They are rather timid and skittish and require plenty of room to run.

Where do hares live?

Hares currently occupy every continent in the world outside of Antarctica. They originally evolved in North America, Europe, Asia, and Africa, but they were later introduced to South America and Australia.

What do hares eat?

Hares primarily consume grasses and sometimes mix it up with fruits, vegetables, nuts, and fungi.

What is a sea hare?

The sea hare is not a hare at all. It’s actually a mollusk.

What Kingdom do Hares belong to?

Hares belong to the Kingdom Animalia.

What class do Hares belong to?

Hares belong to the class Mammalia.

What phylum to Hares belong to?

Hares belong to the phylum Chordata.

What family do Hares belong to?

Hares belong to the family Leporidae.

What order do Hares belong to?

Hares belong to the order Lagomorpha.

What type of covering do Hares have?

Hares are covered in Fur.

What genus do Hares belong to?

Hares belong to the genus Lepus.

What are some predators of Hares?

Predators of Hares include owls, hawks, and coyotes.

How many babies do Hares have?

The average number of babies a Hare has is 6.

What is an interesting fact about Hares?

Hares can reach speeds of over 40 mph!

What is the scientific name for the Hare?

The scientific name for the Hare is Lepus.