Florida is a state located in the southeastern United States. It is one of the best sources of Pleistocene mammals worldwide. Its fossil records date as early as the Eocene epoch, when the state was underwater and was abundant with marine animals. In time, the geology in the region suffered significant changes, and the biodiversity naturally adapted to the newly formed ecosystems.

Nowadays, this southeastern part of the country is as unique in terms of biodiversity as it was millions of years ago, hosting hundreds of species of mammals, reptiles, birds, invertebrates, fish, and insects. Its aquatic ecosystem hosts 62% of U.S. fish species, 48% of U.S. dragonfly and damselfly species, and 91% of U.S. mussel species. Even more, the southeastern region of the United States earned first place worldwide in terms of aquatic fauna!

Many of these species live in Florida. Unfortunately, pollution, mining, invasive species, and poor agricultural practices threaten their existence. Multiple animal species are close to extinction, and some have already disappeared.

Let’s find out more about 6 extinct animals that lived in Florida!

The rainbow snake is called Farancia erytrogramma. It is a large aquatic snake in the family of Colubridae. The rainbow snake is non-venomous and inhabits the southeastern U.S. Its unique pattern makes it easily recognizable: it is blue-ish or blackish in color with three red stripes, while its belly is either pink or red and covered with three rows of black spots.

A rainbow snake can grow as long as 48 inches. They live in aquatic habitats, such as marshes and cypress swamps, and are not aggressive.

However, officials are still looking for this snake. They even offered a $500 reward to anyone who’s seen it and can provide evidence.

Fairy shrimp are also called Dexteria floridana. They were part of the Chirocephalidae family. Tierra Curry, a Senior Scientist, believes fairy shrimp date as early as the Cambrian Period. She finds them extremely resilient creatures that can withstand freezing, drying, and extreme heat. They are usually gray-white and transparent. Fairy shrimp have a thin and flexible exoskeleton and are excellent swimmers.

Dexteria floridana are called “Florida fairy shrimps” because they only live in Alachua County, Florida, a few miles south of Gainesville. They were declared extinct in 2011 when officials found no fairy shrimp in the pool they used to inhabit.

The official name for dusky seaside sparrows is Ammospiza maritima nigrescens. These non-migratory birds used to live in natural salt marshes along the St. Johns River and on Merritt Island.

It is believed that dusky seaside sparrows have gone extinct because of pollution, pesticides, and human action. When the authorities tried to eliminate the mosquitoes inhabiting the Kennedy Space Center area by flooding the region, they destroyed the homes of other animal species, including those of dusky seaside sparrows. Later, the river marshes were drained with regard to highway construction. All of these led to only six remaining dusky seaside sparrows by 1979.

Eventually, the dusky seaside sparrow was declared extinct in 1990, after the last known individual of the subspecies died in 1987. The last sparrow lived for around 9–13 years.

Tremarctos floridanus is also known as Florida short-faced bear or Florida cave bear because it lived along the Gulf Coast in Florida, Tennessee, and South Carolina. Fossils have been discovered in Florida, California, Belize, South Carolina, Sonora, Texas, and Arizona. However, most of the sites are located in Florida.

Most of the discovered fossils are believed to date from the Rancholabrean epoch, while others are considered to be from the Blancan and Irvingtonian epochs. The Florida cave bear is closely related to the modern spectacled bear, which is native to South America.

Glyptodonts were an herbivorous subfamily of armadillos. They are native to South America and appeared as early as 34 million years ago. In time, they’d reached the North American continent.

Glyptodonts weighed approximately 4,000 pounds and were as large as modern cars. Their body forms were similar to those of tortoises. They had strong body armor, which had a unique pattern and type. Glyptodonts had a tail that had defensive purposes.

Glyptodonts became extinct approximately 10,000 years ago, at the end of the last ice age. Some studies show that their disappearance is linked to humans inhabiting the continent. The armadillos that didn’t have such strong armor and, thus, were more flexible, managed to survive.

Mammoths were animals that lived between the Pliocene and Holocene epochs and were distributed worldwide. They are related to Asian and African elephants. The first mammoth is believed to have appeared 5 million years ago.

It’s still uncertain whether mammoths have gone extinct because of climatic reasons or human overhunting. Some studies show that the major factor was the ecosystem changes brought by the Last Glacial Maximum (the time during the Last Glacial Period when ice sheets were at their greatest extent).

A mammoth’s height was approximately 13.1 feet, and its weight was 8.8 short tons. Their appearance resembles that of Asian and African elephants pretty much. 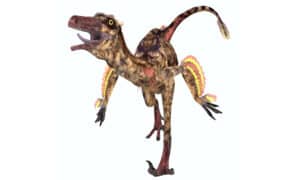