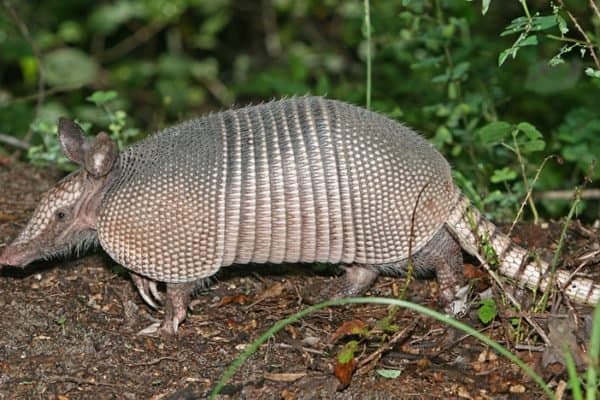 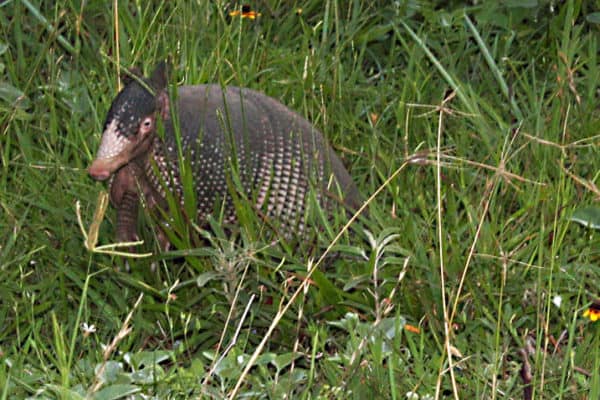 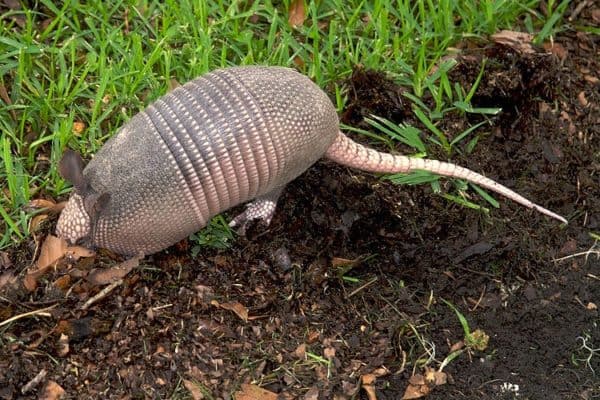 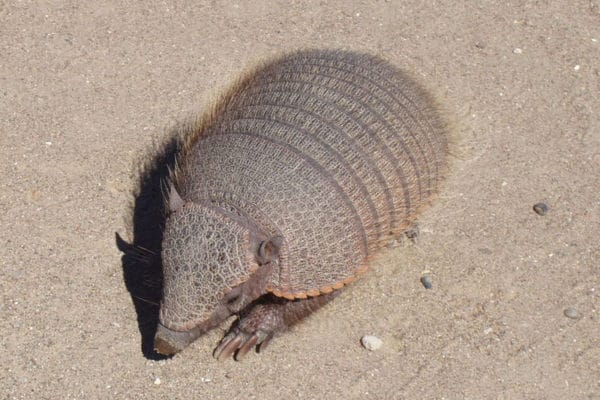 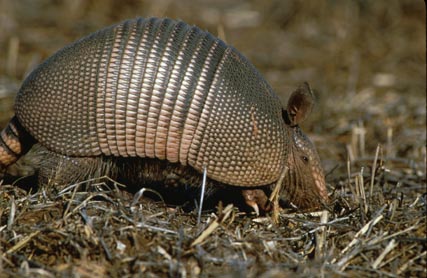 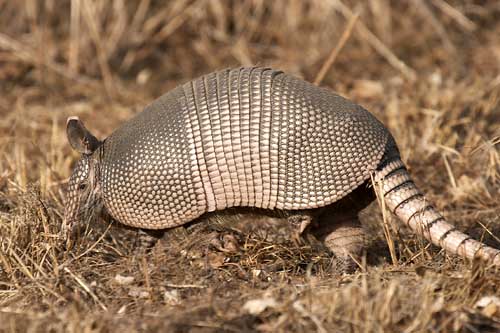 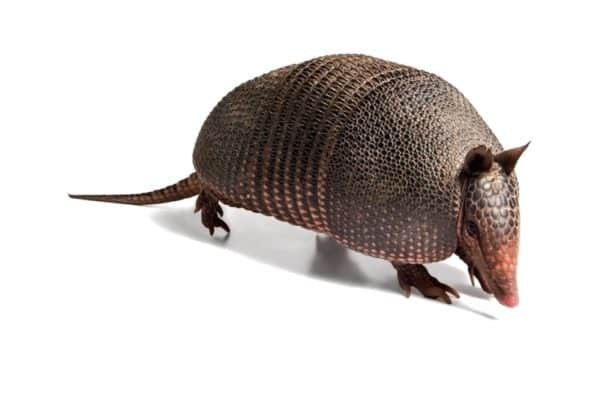 “The armadillo is the only known mammal to have a fully developed shell.”

Resembling an armor-plated vehicle, the armadillo is outfitted with formidable protection against its natural adversaries and predators, which are unable to pierce the tough hide. This natural defense has enabled this creature to thrive for millions of years across the Western Hemisphere. Very few mammals can match its sheer resilience and survivability.

The term armadillo is derived from a Spanish word meaning “little armored one,” which was given by Spanish colonialists and explorers who spotted the unusual creature upon their travels through the Americas. The Aztecs had their own term for this creature: ayotochin, a word meaning turtle-rabbit.

Modern armadillos belong to the order Cingulata, a Latin word meaning girdle. It is believed that this order originated some 60 million years ago, when South America was more isolated from the North American landmass. The entire order was once far more diverse, containing a multitude of different armored animals.

Today, there are only two major families of armadillos remaining: the Chlamyphoridae and the Dasypodidae. Of the two, Chlamyphoridae is the most populated. Only one genus of Dasypodidae remains, though it contains the widespread nine-banded armadillo. More distantly, the armadillo is related to anteaters and sloths.

Armadillos look a bit like armored opossums (though unrelated) with their pointed snouts, short legs, a long tail, sharp claws, and big ears. These creatures are commonly known for their rather plain gray or brown appearance, but in fact, some armadillos have pink, red, or even yellow coloring. They also vary widely in size. The smallest is the pink fairy armadillo at a mere 5 inches long, whereas the largest is the giant armadillo at impressive 59 inches and 120 pounds in weight. This is the size of some larger dogs. Giant armadillos also have up to 100 teeth and six-inch claws.

The armadillo’s most prominent feature, the scaly looking shell, provides an armor-like protection against predators. The armor covers most of head and body and sometimes the legs as well. Despite popular misconception, only one species, the three-banded armadillo, can roll into a ball. The other species dig deep into the ground with their sharp claws to protect their softer parts from damage when threatened by a predator. The number of armored bands on the shell varies by species. In fact, many species are named after the number of bands.

Armadillos are very gifted diggers. By using their sharp claws, they can create massive burrows in the ground to serve as a safe and comfortable home, where, lined with leaves and vegetation, they sleep for up to 16 hours a day. In fact, they are such proficient diggers that their abandoned burrows are sometimes inhabited by snakes, rabbits, skunks, rats, and many other animals. Other potential sources of armadillo nests include hollow logs and long grasses or shrubs.

The digging ability also serves another important purpose: it is the main means of locating food in the ground. This is bolstered by their superior sense of smell, which makes up for their relatively poor eyesight. They can easily sniff out hidden food beyond the sight of most animals. Moreover, long sprouts of hair on their skin (though not their shell) allow them to feel their way around narrow gaps and enclosed environments. Like the anteater, the armadillo has a remarkably long tongue to suck up its prey hiding deep within the ground.

Armadillos have incredibly flexible social arrangements that may change depending on the situation. Most of the time, they enjoy a solitary existence, especially when they come out at night to hunt and forage for food (they are mostly nocturnal animals). But they will sometimes congregate together for several different reasons. The first reason for coming together is to find a mate for the breeding season. The second reason is that they will often huddle together in their burrows to keep warm during cold bouts. Because of a low average body temperature and metabolic rate, they are extremely intolerant to cold weather. For this reason, prolonged periods of cold can be a death sentence.

Armadillos are almost exclusively endemic to Central America and South America. The only exception is the nine-banded species, which is also found in the United States. They are completely absent from Africa, the Eurasian supercontinent, and the Australian area. The greatest variation of this species is found around the Paraguay region. This is due to the fact that it evolved in South America and only slowly migrated out to the rest of the hemisphere. It is possible that armadillos will continue to expand northward into the northern United States and Canada as the climate warms.

Armadillos live in grasslands, rainforests, wetlands, and semi-desert regions of the Americas. These ecosystems provide plenty of places with sandy or loose soil for easy digging and excavation. However, because of their diverse diet, these creatures are capable of surviving in a large number of different ecosystems and habitats.

Although exact population numbers remain unknown, the armadillo, as a group, appears to be in relatively strong health. According to the IUCN Red List, most species are listed as least concern, and yet some are facing down the prospect of steep decline. The giant armadillo and the Brazilian three-banded armadillo are both vulnerable to extinction. Population numbers may be decreasing due to the destruction of their natural habitat across South America. Conservationists have focused their efforts on reducing habitat loss and deliberate deaths from hunting and poisoning.

Armadillos have adapted to rely on a nearly inexhaustible food source, spending most of the day foraging for invertebrates and larvae. Ants and termites appear to be a favorite meal for many species of armadillo, but they will also eat beetles, cockroaches, wasps, spiders, snails, scorpions, and much more. Other sources of food include fruits, vegetation, eggs, small reptiles and amphibians, and carrion.

Lacking sharp incisors or canines, their short, flat teeth are well-suited for consuming small, crunchy animals and plant matter. Combined with their long tongues, armadillos can consume an impressive amount of food per day. They are generally helpful for humans as they dispose of insects and pests that can harm crops. However, armadillos can inadvertently destroy crops themselves by digging around in the dirt. For this reason, some farmers have considered them a nuisance.

Armadillos face danger from all kinds of predators, including jaguars, coyotes, bobcats, wolves, bears, and large hawks and other birds of prey. The armored shell is obviously its main means of defense. If this fails, then it may try to lash out with its sharp claws, attempt to play dead, or simply run away. Although it may not look like it, the armadillo is actually an agile runner and jumper, capable of making a quick escape. One species of armadillo, the nine-banded, can actually float across water by taking in enough air to make its entire body buoyant.

Throughout human history, these animals have often been hunted as a source of food or for its parts, especially in South America. During the Great Depression, they sometimes became a last resort for desperate and hungry people. They were described as “Hoover hogs” by those who blamed the president for their economic struggles.

Armadillos are also vulnerable to many other types of human activity, including road accidents, poisoning, or extermination. The biggest threat to the continued existence is the loss of rainforests, wetlands, and other habitats across South America. The armadillo is resilient and capable of adapting to many different situations, but it is gradually being pushed out of its natural habitat.

The armadillo’s breeding season varies by species and region. Some armadillos can breed year-round, while others only breed at specific times of the year. Males rely on their strong sense of smell to locate a potential mate. One species, the yellow or six-banded armadillo, engages in a truly elaborate courtship ritual in which the female will run from her male suitors. After the fastest male catches her, they will mate even as the female continues running.

There are other unique and bizarre aspects to armadillo anatomy and reproduction. The male, for instance, has one of the largest penis sizes to body lengths among all mammals. The females also have the ability to delay implantation of the egg after copulation until food is more plentiful. And compared to other mammals of a similar size, armadillos are truly prolific breeders. The seven-banded armadillo can produce between eight and 15 identical babies, or pups, at a time. The nine-banded armadillo can produce four identical babies. However, some species may only produce one or two pups at a time.

Once conceived, the babies develop quickly. After a gestation period of only two to five months, the young pups are born. At first their skin is soft and vulnerable, but they develop the hardened armor over a matter of weeks. They are then weaned at the two- to four-month period. Within a year, they reach full sexual maturity and are ready to venture out on their own.

Depending on the species, armadillos have a lifespan lasting anywhere between four and 30 years. In captivity, they have been known to live even longer. However, some species may not be suited for captivity and tend not to live very long in zoos or wildlife centers.

Armadillos in the Zoo

How many species of armadillo are there?

There are currently more than 20 living species of armadillos in the world, most of them located in South America. However, dozens more extinct species have been documented from the fossil record.

How many species of armadillo are there?

There are currently more than 20 living species of armadillos in the world, most of them located in South America. However, dozens more extinct species have been documented from the fossil record.

Armadillos can sometimes be a nuisance to humans, but if you want to remove an armadillo from your land, then you should do it in a safe and humane manner by contacting a local wildlife service.

Can an armadillo hurt you?

Armadillos pose very little risk to humans, but they are sometimes carriers of diseases, so you should try not to handle them yourself.

If not accustomed to the presence of humans, armadillos are skittish and shy. They almost always keep their distance from people. If you see an armadillo, it is a good idea to leave it alone.

How to say Armadillo in ...