Out of all the types of insects you may see around your yard or garden, a praying mantis certainly stands out from the crowd. These insects can be up to six inches long depending on their species. Some are dull brown or gray while others are bright green or even yellow. This insect can turn its head 180 degrees and walk up a brick wall!

The big eyes and triangular head of this insect make it look kind of threatening. This may prompt you to wonder: Do praying mantises bite?

Yes, a praying mantis can bite. But, instead of teeth, it has mandibles. Mandibles are strong, sharp jaws that move sideways to cut or tear up food. You’d have to look really closely at a praying mantis to see its mandibles. You’re more likely to notice this insect’s long front legs.

A praying mantis has front legs with serrated edges kind of like a shark’s teeth. So, when it grabs an insect or other prey with its front legs, the insect is held tight and can’t escape.

When a praying mantis is at rest, it folds its front legs up toward its face. This is how it got its name.

Praying mantises do bite humans, but it is very rare. If a praying mantis felt threatened by a human who picked it up or cornered it, the insect would likely take its defensive pose as opposed to trying to bite.

If a small praying mantis measuring two or three inches bit a human the person may not even feel the bite. However, someone may feel a pinch if bitten by a six-inch praying mantis.

Praying mantises are able to grab onto a person’s fingers with their front legs. This can cause mild pinching. However, this would be just as rare as a bite from this insect.

What If a Person is Bitten by a Praying Mantis?

A person who is bitten by a praying mantis may see a red spot that becomes itchy or swollen. Fortunately, praying mantises aren’t venomous, so there’s no danger of the person becoming ill from a bite.

Someone who’s bitten by this insect should wash the area with warm water and soap. If the spot becomes irritated or itchy, calamine lotion can help soothe it.

What Do Praying Mantises Eat?

Though a praying mantis’ bite is not really of concern to a human, it is a big concern for many small insects! A praying mantis is a carnivore eating crickets, spiders, lizards, frogs, and even tiny birds.

How Do Praying Mantises Attack Their Prey?

Out of all of the facts surrounding this insect, this is one of the most interesting ones. Have you ever heard of a female praying mantis biting off the head of a male praying mantis? Though it sounds very strange, this fact is true.

The answer: Scientists aren’t sure why a female bites off the head of a male while mating. One common theory is she eats the male for nourishment so her eggs will be stronger.

While studying this behavior in female praying mantises, scientists noted that this doesn’t happen every time. In fact, they found that the female bites off the head of a male praying mantis only 30 percent of the time. Even so, it’s one of those incredible mysteries of nature.

What Are Some of the Predators of Praying Mantises?

How Does a Praying Mantis Protect Itself Against Predators?

Another way a praying mantis protects itself from predators is to make itself appear bigger than its actual size. When it feels threatened, a praying mantis raises its body and starts to shake its front legs. It may spread its wings to add to its size as well. Sometimes this insect moves its head from left to right in a repetitive way in an effort to confuse a predator. All of these defensive tactics may be enough to drive a smaller predator away. 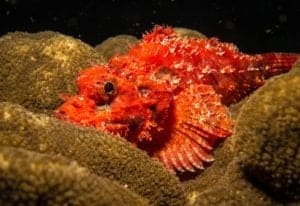 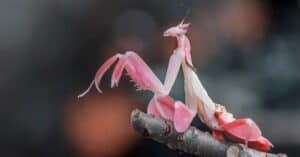