Bear attacks, while uncommon, do occur, particularly in bear territory such as Yellowstone National Park, which is home to over a hundred grizzly bears. However, many believe you are more likely to be killed by lightning than by a grizzly bear. But how true is that? Which is more likely to happen in Yellowstone? Keep reading to find out.

Are You Likely to Be Struck By Lightning or Attacked By a Grizzly Bear in Yellowstone?

There’s a saying that goes thus, “lightning never strikes twice,” but in Yellowstone National Park, you’re more likely to be killed or injured by lightning than by a grizzly bear. In a year, the possibility of being struck by lightning is more or less than one in a million, with 10% of those struck killed and 90% disabled.

Yellowstone National Park is home to many impressive peaks, such as the appropriately named Electric Peak and Eagle Peak; the latter stands at 11,372 feet and is the tallest in the park. During storms, lightning strikes become more common above the tree line, though you’re just as likely to be struck by lightning while kayaking on a lake. It’s anyone’s wager when and where the next lightning strike will occur. What a devilishly unpredictable nature!

Bear attacks, on the other hand, are rare but happen. Yellowstone has received over 118 million visitors since 1979, and grizzly bears in the park seriously injured 44 people during this time period. The probability of being attacked by a grizzly bear is approximately one in every 2.7 million visits for all park visitors combined, which is still lower than being struck by lightning. People who do not leave developed areas or roadside areas are at a lower risk, while those who hike in the backcountry are in greater danger.

Every year, people are struck by lightning and attacked by grizzly bears. Hence, we should not dismiss danger because it is unusual or uncommon. However, bears should not keep you from exploring the woods, and being aware of the hazards can often help to mitigate the risks. Bears can be an important part of the wilderness experience, and we should be grateful for their presence. Bears make isolated areas feel more alive and engaging, and many people would be sad to see them go.

How Can You Lower Your Chances of Being Hurt or Killed by a Grizzly Bear in Yellowstone?

As a visitor, you should know how to act in grizzly bear territory, especially in Yellowstone National Park. Bears are constantly on the lookout for food, and their instinct is to get the most food with the least amount of effort. In bear-infested places, some common precautions include:

Please be prepared if you plan to visit America’s First National Park or any other wilderness known to have bears. It is always better to be safe than sorry, both for your own and the bear’s sake.

How Can You Avoid Being Struck by Lightning in Yellowstone?

While getting soaked in a downpour is unpleasant, lightning is usually the most threatening. If you’re in the backcountry and a thunderstorm approaches, follow these instructions to avoid lightning strikes:

During every thunderstorm, rangers inform anyone hiking or camping in the backcountry to avoid open spaces and seek the lowest terrain possible. Visitors should avoid unnecessary contact with the ground and keep their arms and legs close to their abdomen in the forest or under a rock formation until the storm passes.

Yellowstone Bear Attacks: How Often Do They Happen?

How Many Grizzly Bear Attacks Happen Per Year? Lightning vs Thunder: What are the Main Differences?

7 Unbelievable Animals That Hunt By Shooting Their Prey 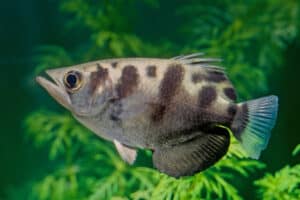