Fon Duangkamon/Shutterstock.com
Share this post on:
More Great Content:
Jellyfish Predators: What Eats Jellyfish?
The Deadliest Jellyfish in the World
So, What Do Jellyfish Eat and How…
The World's 9 Largest Jellyfish
Jellyfish Lifespan: How Long Do Jellyfish Live?
Watch This Diver Encounter an Otherworldly Glowing…

Ask any person on the street, and they can probably describe a jellyfish to you. But do you know how long a jellyfish lives, or what their life cycle looks like? Jellyfish were swimming in our oceans before the dinosaurs walked the land, and some of them live a surprisingly long time. Here we’ll discover just how long jellyfish live, and why scientists have dubbed one species ‘The Immortal Jellyfish’.

Just What is a Jellyfish?

Jellyfish aren’t fish at all, they’re actually a type of plankton. They’re characterized by gelatinous, bell shaped bodies with long tentacles that drift below them to catch food and warn off potential attackers. Even though they don’t have brains, jellyfish are actually the oldest multicellular creatures on earth, older than even the dinosaurs!

Jellyfish bodies are 95% water, and they range in size from smaller than the head of a pin to as long as a blue whale. The moon jellyfish (Aurelia aurita) is the most common type of jellyfish, and is often seen in aquariums. Some people even keep jellyfish as pets, and others, particularly in Asian countries, consider them delicacies.

Jellyfish have complex life cycles, beginning with fertilized larvae floating in the ocean. The larvae sink and attach to the seabed or coral reefs, from there they develop into ‘polyps’. These polyps grow until they reach maturity, then detach from the seabed and float off into the ocean to feed and reproduce. These adult jellyfish are known as ‘medusas’.

One species in particular, dubbed the ‘Immortal Jellyfish’ (Turritopsis dohrnii) may actually live forever. This jellyfish is more likely to die at the hands (or mouth) of a turtle or fish, then from old age.

The Oldest Jellyfish Ever: The Immortal Jellyfish

Though there is no official ‘oldest jellyfish ever’, there is a very special species of jellyfish that scientists say may be immortal – biologically at least.

Turritopsis dohrnii, dubbed ‘the immortal jellyfish’ may be the oldest living creature on the planet. When this jellyfish gets old, or hurt, or even too hungry, it uses a process called ‘transdifferentiation’ to regenerate its old cells.

First, the jellyfish falls to the ocean floor, or coral reef. From there the adult medusa reverts back to its polyp form, regenerating the cells and creating brand new, youthful cells that are genetically identical to the old medusa. The immortal jellyfish can theoretically do this forever, that is, until it gets eaten by some other sea creature like a turtle, whale, or fish. Scientists think that, unhindered, the immortal jellyfish can keep on living forever, with no cap on the number of times it can regenerate.

Jellyfish go through life in several different forms. Most jellyfish only go through these steps once before dying, but the immortal jellyfish repeats them over and over again — potentially forever.

The jellyfish is one of the very few species that doesn’t seem to have been negatively impacted by climate change and human interference. As far as scientists can tell, jellyfish populations have actually increased in recent decades.

One type of endangered jellyfish is the freshwater jellyfish. Native to China, and no bigger than a penny, this jellyfish lives exclusively in fresh (not salt) water, and has been on the decline in China due to water pollution. However, freshwater jellyfish can be found all over the world in sources of freshwater like lakes, reservoirs, and rivers. 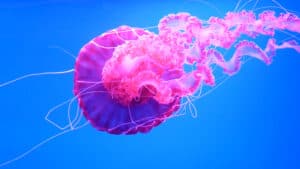