The jellyfish is one of the most fascinating and strange spectacles on the planet. With their beautiful luminescent glow and odd bell-shaped body, they hardly seem like animals at all, but instead some kind of strange alien life. Nevertheless, they share many qualities in common with other animals, including the symmetrical body plan and ability to use oxygen. All 200 existing species of true jellyfish, as well as all corals and sea anemones, belong to the phylum of Cnidaria (for comparison, all known vertebrates occupy a single phylum as well).

While all adult jellyfish have the same symmetrical bell-shaped body, they do exhibit an enormous diversity in size, color, and number and shape of tentacles. They can be found in just about every marine environment around the planet; only a few of them are known to inhabit freshwater ecosystems exclusively.

Don’t be alarmed! These freshwater jellyfish are not harmful to humans because of the tiny size of their tentacles. If that sounds interesting, it is possible to keep freshwater jellyfish in a home aquarium; however, there have to be some modifications to the aquarium to ensure these animals do not get pulled into or harmed by the filters. The water has to be very still. To further complicate the situation, other fish should not be added to the home aquarium for fear of jellyfish stinging them.

The first true jellyfish evolved somewhere around 600 million years ago (the date is inexact because their soft parts do not fossilize well). This makes it a representative of the earliest forms of multi-organ animal life on the planet. Composed of more than 95% water (humans, by comparison, are only 60% water), they have relatively simple bodies with no respiratory or circulatory system and only basic digestive and neurological functions.

Back when they first evolved, their dietary options were more limited to very basic organisms floating through the water. Today, they feed on a huge variety of different animal and plant life in the oceans. The composition of the diet can influence the color of the jellyfish, turning it pink, purple, or red with different pigments.

Despite their simplicity, jellyfish are actually some of the most efficient swimmers in the ocean, perhaps because so little of the jellyfish mass is actually devoted to the process. They are powered by the expanding and contracting motion of the bell, which squirts water in the opposite direction of where they are headed. How the relatively simple digestive system of the jellyfish is used to produce energy is actually a fascinating subject, which will be covered here in the article. It’s also a very fascinating study of how the digestive system could have evolved in early animals.

What and how do jellyfish eat? Depending on the species, the jellyfish has a wide and eclectic diet, consisting of plankton, crustaceans, plants, small fish (including both egg and larval stages), and even other jellyfish. Most of them are purely carnivorous in nature – imagine a very large jellyfish consuming a lobster or a crab. However, there are some interesting exceptions. The spotted jellyfish raises algae inside of its stomach and derives nutrients from the resulting photosynthesis.

Regardless of diet, jellyfish are voracious eaters. Sometimes they can be seen congregating together groups of millions called blooms. These groups consume so much food that they actually hollow out entire fisheries, leaving less behind for people to catch. Unfortunately, it’s thought that climate change may increase the likelihood of blooms occurring throughout the world’s oceans in the future, which could decimate some ecosystems further.

How do jellyfish catch their food?

How do jellyfish eat and catch their prey? The answer to that question depends partially on the life stage of the jellyfish. What many people may not know is that the anatomy of the jellyfish changes radically across its four-part lifespan. By strategically switching between sexual and asexual reproduction at different points in their lives, jellyfish can undergo a remarkable transformation.

The first stage of the jellyfish is the larva, produced from the sperm and egg of the parents. Once it finds a suitable surface, the larva will settle down and develop into a sedentary polyp. After a certain amount of time has passed, it will then bud into several free-swimming clones called ephyrae. Each one of these will eventually reach the full “medusa” adult stage. It only remains in the adult stage long enough to reproduce, and the larval stages are just transitional forms.

The polyp is usually the longest and most enduring of the four; it can remain in this form for a few years, awaiting proper conditions to complete its transformation into adulthood. The polyp has a fully developed digestive system, but it remains stuck to a rock or other surface, unable to move. The polyp is, in essence, a passive predator, seizing on whatever small animals or organic matter that floats by with its tentacles to consume them.

Once it reaches the medusa stage, the jellyfish gains some degree of mobility. While floating placidly through the water (either by a current or their own power), they expend minimal effort to hunt down food, probably because their limited neurological and muscular system prevents them from out-swimming or maneuvering their prey. Instead, they spread out their long tentacles, which in some species (like the lion’s mane jellyfish) can reach some 100 feet long, to help them collect food in the water as it passes by.

The tentacles contain painful stinging cells that paralyze or stun their prey. There are thousands of these small little cells along the length of the tentacle. When making contact, they explode with the pressure of more than 2,000 pounds per square inch, piercing the skin of its victim. In some species, the sting is sometimes powerful enough to cause immense pain and even death to humans, but this is usually the result of accidental contact or self-defense on the part of the jellyfish rather than aggressive action.

Jellyfish also have the ability to draw food inward toward their tentacles with the power of their swimming motion. This means they expend no more energy than they otherwise would by simply swimming through the water.

One interesting wrinkle to this story is that some species of jellyfish share a symbiotic relationship with other animals. Symbiotic is a scientific term for when two species living in close proximity share a mutually beneficial relationship. What this means in practice is that some smaller animals and juvenile fish will live close to the bell of the jellyfish, either naturally immune to its poison or somehow avoiding the tentacles, to protect themselves against common predators.

What advantage does the jellyfish gain? It’s thought that the symbiotic species may act as a lure to draw in prey for the jellyfish to consume (though there may be other factors at play). These types of relationships don’t always end well, however; sometimes the jellyfish may decide to betray its passenger and eat it instead. But this is a risk worth taking for the smaller animal because the odds of survival are actually greater near the jellyfish than outside of it. The aptly named cannonball jellyfish shares a symbiotic relationship with no less than 10 different other marine species, including the juvenile longnose spider crab, which lives inside of the bell (it’s not clear what advantage this confers to the jellyfish; it may just be a one-sided relationship).

How do jellyfish digest food?

How do jellyfish eat and digest? Despite their rather simplistic anatomy, all jellyfish have a basic set of digestive organs like any other animal. After killing or paralyzing its quarry, some (though not all) jellyfish will move the food toward its mouth with a set of oral arms, located on the underside of the bells. These arms basically resemble short tentacles and have a range of different movements. The mouth itself is nothing more than a small hole located on the underside of the bell. It simultaneously functions as a mouth, anus, and a general opening for water to enter and then leave the body.

This is where the highly simplistic nature of the jellyfish anatomy becomes most apparent. The mouth and the stomach are directly connected by a small entry. There is no throat or other organ in between. The digestive system of the jellyfish is so simple that it lacks a liver, pancreas, or intestines, which produce important chemicals and absorb nutrients in most other animals. Instead, it’s basically just a large cavity that produces everything necessary to break down food on its own. Since jellyfish lack a circulatory system of any kind, the nutrients diffuse naturally into the water throughout the body.

When the jellyfish is done feeding, it will expel undigested waste out again through the mouth. The process itself is very fast and efficient because it cannot eat again until the previous food has left the body. Given the importance of specialized digestive organs like the intestines and liver in the evolution of more complex animals, this simplicity also probably limits it to only basic functions and behaviors. The jellyfish, for its part, seems to live just fine without them. After all, it’s still thriving after some 600 million years. 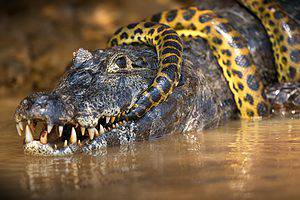 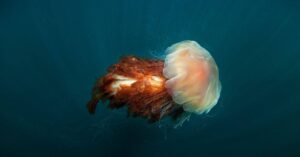