Lizards can usually be seen soaking up some sun during the day, but they prefer hiding near rocks and other vegetation at night. Being a part of the reptile class of animals, lizards share traits such as the forked tongue of a snake and scales. Lizards use their claws to dig, climb, and defend. Their tails are often as long or longer than the rest of their body and are used for balance, climbing, and protection.

Lizards can live up to 50 years and have 4,675 identified species. Most of the species will lay their eggs, but a few are carried inside the mother. Lizards mature from 18 months to 7 years, some species taking much longer to become full-grown. They vary in length from just over a half-inch to over 10 feet.

Some interesting facts about lizards are:

The lizards we typically think of and know about are not going to make this list. Continue reading to learn which species make the top ten list for the largest lizards in the world!

One of the fascinating lizard species is the marine iguana. They are the only lizard to swim in the ocean around the Galapagos Islands. The short blunt noses allow them to feed off the marine algae and seaweed. Using their claws to help them stay at the ocean floor and their flattened tails to help swim in a snake-like motion. They can remain submerged for up to 30 minutes and dive as deep as 65 feet underwater. They will “sneeze” out excess salt absorbed from extended periods in the ocean to prevent dehydration.

During times of sparse food supply, the Marine Iguana can lose up to 20% of its size. This allows the lizard to survive on less food and remain healthy. Once the food supply is restored, the lizard will regain its former size. The males grow to be 26 pounds and around 4 ½ feet in length, and the females are generally smaller at about 2 feet long.

The young Marine Iguana is generally black. As they mature, their color will change to include red and black, green, red, and grey and they will become more colorful during the mating season. They lay 2-3 eggs on land in burrows that will hatch between 2 ½ and 4 months later. The lifespan of the Marine Iguana is up to 60 years.

This species has decreased dramatically in numbers, losing many of the population during El Nina and a second wave of loss during the 2001 oil spill from the tanker Jessica. The introduction of other animals such as cats, dogs, and pigs has also taken many lives of the lizard. The total population now is estimated to be between 200,000 to 300,000.

The Galapagos Land Iguana is native to Galapagos. It will grow to be 28-30 pounds and just shy of 5 feet long. Their coloring is primarily yellow with white, black, and brown blotches. They are considered vulnerable. The rise in numbers of small animals such as cats, dogs, pigs, and rats has been a cause for the decrease in the land iguana population. More animals are hunting the same food sources, and these animals are predators to the young land iguana and their eggs.

Land Iguanas reaches maturity between 8-15 years of age with a lifespan of 50 years. When they mate, the female will search out a suitable nesting spot, burrow and bury between 2 and 20 eggs. The male will be very territorial and will defend their counterparts. The female will protect her nest against other females looking to use the same nesting area but will ultimately leave the nest for 3-4 months. It will take about a week for the babies to dig their way out of the burrow.

As the name suggests, this lizard is blue to grey-blue. It grows to be approximately 31 pounds and nearly 5 feet long. The coloring gives cover when the Iguana camouflages itself among nearby rocks and scrub of Grand Cayman Island. An adaptable lizard makes its home dry, rocky forests with prickly foliage or moist areas of woodland forests, dry to subtropical or semi-deciduous forests.

The Blue iguana prefers to eat leafy greens, carrots, sweet potatoes, fungi, insects, soil, excrement, leaves, stems, fruits, and flowers. They like to bask in the sun and hide in rocks, crevices, or caves at night.

This lizard has an average lifespan of 25-40 years and doesn’t become sexually mature until they are 4-9 years old. They breed in the spring, typically April-June. The female Iguana can become aggressive and territorial after she mates. The eggs will stay inside the female until late June-August. She will have up to 20 eggs, bury them one foot deep, and nurture them for 60-90 days until they hatch. There is a high number of eggs that succumb to predators.

Named appropriately, the lace monitor is dark in color with cream to yellowish lace-like patterns. This is to help camouflage them from their predators. When they lay their eggs, the female monitor will dig the side of a termite mound and lay 6-12 eggs. The termites will rebuild their mound, thus protecting the eggs from predators and elements, keeping the eggs at a constant temperature. After about seven months, the females will return to dig out the hatched eggs.

The lace monitor is the second largest lizard in Africa, reaching up to 31 pounds. They have adapted their long tongue to be snake-like for better use of their smell and taste senses. Using their highly developed senses, they can tell where their predators are located by flicking their tongues and tasting molecule remnants. They are venomous but not deadly. Their long tails are used for balance while climbing, for whipping as a defense, swimming, and dominance when courting the females during the mating season.

Our sixth-largest lizard is the Nile monitor, at an average weight of 44 pounds and is 8 feet long. Their tails are nearly 1.5 times the length of their body with an olive-green to black color with cream or yellow colored V-stripes on their head and neck. These stripes look like bands or spots as you look farther down the back.

At about two years of age or 14 inches, the females will begin having eggs. They are deposited in burrows, typically 12-60 eggs at a time, depending on the size of the lizard. The Nile monitor is semi-aquatic but loves to bask in the sun on rocks and tree branches. They are native to Africa and have been seen as high as 6,560 feet above sea level. There have been some Nile monitors spotted in Florida, probably due to escaping or being released from captivity.

This is large lizards is often kept as a pet. Their temperament is very mild when raised as a pet, and they even need interaction with their humans and are said to recognize their owners. If you are inclined to keep a black-throated monitor, they like to play, and they need exercise. You can take them for walks on a leash. This is a stress reliever for your lizard and will give him a better immune system, improved health, and socialization. Those that grow up in the wild can become aggressive due to their need to play. The uncertainty of what a person wants may cause them to become fearful and lash out.

These lizards grow to be 60 pounds and up to 7 feet long and are distinguished by their grey-brown scales with yellowish-white markings. Since they are native to Africa, they like warmer temperatures, preferably no lower than 68 degrees. The Black-Throated Monitor needs approximately 12 hours of UVB lighting each day. They eat small rodents, crustaceans, fish, birds, eggs, small reptiles, and even chickens.

Australia is home to the perentie lizard, and the Komodo is a relative. A bite from the perentie lizard is not poisonous but will take a long time to heal. The lizard does possess evolutionary remains of a venom gland which is a possible reason for the length of healing after a bite.

If approached by a predator, the perentie will raise its head and hiss to scare the predator. Their second defense is using their long tail as a whip. They will turn and run if neither of these works.

Their favorite meals are turtle eggs, insects, birds, other reptiles, small mammals, and marsupials. At 8.2 feet long and an average of 44 pounds, the perentie lizard lives up to 40 years in the wild and hibernates during the colder months.

The tree crocodile typically ranges from 7-9 feet, although the longest measures at an impressive 16 feet, giving them the win for longest lizard (the Komodo is still the largest by size). The longest portion of the lizard is the tail, which is half its length. They like to eat carrion, small reptiles, mammals, and bird eggs.

This species is considered a challenging hunt due to its aggression. However, they prove to be valuable for their meat and skin for clothing and drumheads. Many are caught in traps that were set to catch other animals. Monitor lizards have snake-like tongues that give them better accuracy in searching for prey. The long tail is used as a whip, and the serrated teeth will slice and tear meat somewhat like a crocodile, which is why they have the name.

Southeast Asia is home to the Malayan water monitor. Growing as long as 9.8 feet, this ferocious lizard can swim underwater for long periods and live happily on crab and other invertebrates. It can also climb trees and feast on what it finds in a bird’s nest. They are not timid from urban areas and have been spotted eating roadkill.

The tail and the neck are pretty long, and the sharp claws and tail are used as weapons. Humans bitten by the Malayan water monitor will not die from the venom but will experience some mild effects of the poison and bacteria from the bite.

The male monitors will wrestle. They stand on their hind legs, and when they engage in the fight, they appear to be hugging. When one knocks the other to the ground, the match is over, and the one left standing wins.

Weighing in at 300 pounds and 10 feet in length, the Komodo dragon ranks number one as the largest lizard. The young dragons are 18 inches long and live in the trees for several months while they grow. Adult Komodo dragons will eat their young and other dragons but typically eat carrion as their primary food source. At times they will also eat pigs, deer, and cattle. They have been known to attack and eat humans.

The Komodo dragon doesn’t always need to capture its prey. Their venomous bite prevents blood clotting; thus, the prey will go into shock as they bleed to death. Some believe that the bite also introduces bacteria that adds to the dying process. Komodo dragons will also feast on prey that has recently died or is almost dead. These magnificent creatures live in Indonesia.

Cute But Deadly: The 10 Most Vicious Animals That Look Cute! 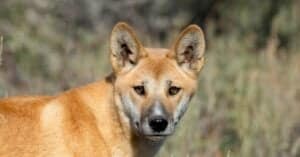