Indigo snakes are long, black, and formidable hunters. They are also sometimes called the eastern indigo snake and are found in the southern and central United States. Even though they are not venomous, they are large and fearless, and exceptionally good at hunting prey. With iridescent blue-black scales that can appear purple in some lights, they are also beautiful snake!

This video is a striking example of one species of snake hunting another and gives us an up-close view of an indigo snake in action.

How Could Indigos and Pythons Meet?

Burmese pythons are a native snake of Asia but are not a natural inhabitant of Florida which is, according to the video notes and comments, where this footage was filmed. They were introduced into the area during the 1970s and 1980s as part of the exotic pet trade. Many would-be snake owners found that they could not cope with these large animals and released them into the wild whilst others escaped. They began to breed and established a population of their own which has had consequences for native species.

However, here we see one of those native species getting their own back on the python in a spectacular way! The python is a large snake and can grow over 20 feet long. This one is baby python and may have tried to move away from the nest before predators could pick up the scent. Unfortunately for this little python, it is already too late because they have been detected by an indigo snake. Pythons are also hunted by humans and alligators; in turn, they hunt their own prey by grasping them with sharp teeth and then coiling around the animals and squeezing them until they suffocate. We see the small python attempting that tactic on the larger snake as a form of defense but without success.

The attack starts when the indigo snake picks up the scent of its prey. They follow behind for a short time, carefully maneuvering themselves into a good position to strike, which they do to great effect. They grasp the python just behind their head, which secures it and partially blocks the airway. The tactic is to pin the python to the ground until they are exhausted. It stays in this position until the younger snake tires and stops struggling so much. Then they drag their prey back to their den whilst swallowing their prey alive and whole.

At the end of the video, we see the last part of the python’s tail disappear into the indigo’s mouth. Job done! 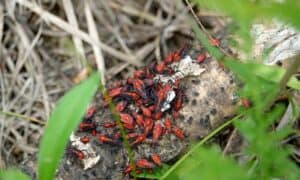