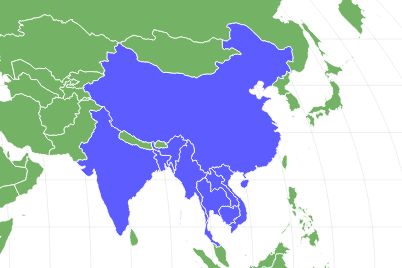 Prey
Mice, rabbits, and chickens
Name Of Young
Hatchlings
Group Behavior
Fun Fact
These snakes can swallow their prey as whole.
Estimated Population Size
30,000 or more around the world.
Biggest Threat
Humans and alligators
Most Distinctive Feature
These snakes have puzzle like patches all over the skin.
Gestation Period
2 to 3 months
Litter Size
100
Habitat
Natives of jungles and grassy marshes of Southeast Asia
Predators
Alligators and human beings
Diet
Carnivore
Favorite Food
Mice, rabbits, and chickens
Type
Reptiles (Snakes)
Common Name
Burmese python
Number Of Species
1
Location
Native to Asia and can be found from eastern India through Vietnam and southern China. Can also be found in the islands of Java, Bali, small parts of Sulawesi, Sumbawa, and Florida (United States).

View all of our Burmese Python pictures in the gallery.

View all of the Burmese Python images!

Burmese pythons have beautifully patterned skin and have a rapid growth rate. For anyone looking to adopt a new reptile, the Burmese python should be reserved for individuals that have more experience with this type of animal. Far too many adopters end up neglecting them, releasing them into the wild instead.

By nature, the Burmese python won’t seek out humans to hunt and kill them. However, if they are mishandled or threatened, there is a risk of attack (though it is admittedly low). Of all of the Burmese pythons that live in Florida (where it is an invasive species), there are no human deaths currently reported. That said, you can consider them one of the world’s top apex predators.

These attacks are relatively common and can sometimes be deadly. They are one of the largest snake species in the world. The lifespan of Burmese pythons is around 20 years, but the record for the longest life was 28 years old. Albino Burmese pythons are known to be the most popular.

Here are a few interesting facts about the Burmese python:

The word “bivattatus” comes from a Latin translation, which means “having two bands or stripes.” Considering the pattern of the Burmese python’s scales, it is easy to see how this description matches them well.

Burmese pythons are known to be one of the largest snake species in the world. These snakes can often reach up to 23 feet in length (though reaching a length of 15 to 20 feet is more typical), and they can weigh up to 200 pounds. One of their most striking characteristics is their girth, which can be as wide and thick as a telephone pole. However, when they are born as hatchlings, the Burmese pythons are only about two feet long.

Burmese pythons are tan in color and have dark spots on the back and sides of their bodies, mimicking the same pattern that is commonly found on the giraffe. These patches, however, are not placed uniformly over their skin and can often look like puzzle pieces put together.

The Burmese pythons that are found in Florida usually grow to be only 6 to 10 feet long, and the adults can reach the same size as native snakes. The albino Burmese pythons are known to be the most popular.

Young Burmese pythons like to spend their time on trees. However, as they mature and grow older, their height and weight can make it difficult to reach the same distance, leading them to mostly spend time on the ground or other low-level habitats.

When not on land, these pythons are excellent swimmers and can stay underwater for up to 30 minutes before they have to come up for air. Despite these many methods of movement, one of the characteristics that makes them less welcoming to others is their solitary behavior. The only time that the Burmese python is typically seen with another one of its kind is during mating season, which typically occurs in the spring. They are relatedly easy to breed in captivity.

The Burmese pythons are known to be invasive species in Florida since they are not native to the area. Unfortunately, they often are found in the region because they are released by reptile owners that couldn’t take care of them, which is highly irresponsible to the ecology of the area. These pythons can significantly destroy the ecosystem, hunting down mammals that can lead to major population issues. These pythons have such power and strength that they can even feed on alligators, leading local researchers to take notice of the unnatural preying and feeding on native animals by the Burmese python.

Typically, these pythons are native to jungle areas and grassy marshes of Southeast Asia. These snakes are native to Asia and can be found from eastern India through Vietnam and southern China. They are also found in Florida, though the release from former owners has wreaked havoc on the environment, which is why they are considered an invasive species.

Due to the extreme weather, these pythons are not often found in southern Thailand, Myanmar, or the western parts of Malaysia. Instead, it is easier to locate them in the islands of Java, Bali, small parts of Sulawesi, and Sumbawa.

These pythons are carnivorous, primarily surviving on small mammals and birds. These snakes have poor eyesight and stalk their prey by making use of the chemical receptors that are present in the tongues of these reptiles. They also use the heat-sensors that are present along the jaws, though they won’t move quickly. In fact, these animals only move at a pace of about a mile per hour, giving them plenty of time to sense their surroundings.

These pythons are known to grasp their prey with their sharp teeth and coiling their bodies around the prey. They then squeeze the prey until it suffocates to death. These reptiles have very stretchy ligaments that allow them to swallow their food in whole parts.

These pythons eat pinky mice when they are babies, though pet owners can still feed them adult mice and rabbits when they become mature adults. Their powerful jaw and body make it easy to consume an entire chicken by themselves.

While the pythons make an important part of the food chain, they have also been responsible for the disruption of the ecosystem. This happens when these reptiles eat unnatural amounts of their prey species, causing them to deplete from the world. The ecosystem then stands disturbed.

Because they are massive in size, these pythons do not have a lot of predators. However, several alligators and humans tend to make some of the predators they do have. Human activities like industrialization and urbanization also impact the local populations of these pythons negatively.

These snakes are now endangered because their habitat has been depleted and their demand as a pet or even as a delicacy in cuisine is too high. People hunt them down for authentic Burmese python skin, which is why their demand in the market remains so high.

Perhaps one of the most unique characteristics that scientists have discovered about this animal is that these pythons can, unlike most reptiles, reproduce via parthenogenesis (i.e., asexually). Isolated females in captivity without any contact with the male Burmese pythons can still produce viable eggs. After genetic analysis, researchers ultimately found that the hatchlings produced from this type of reproduction were genetically identical to their mothers.

These pythons are not creatures that can be seen in groups. They are usually solitary and come together only during the spring mating time. Female Burmese pythons can lay clutches of up to 100 eggs, incubating them for up to three months before the hatchlings emerge. In a bid to keep their eggs warm, the female Burmese pythons continually shiver and contract their muscles.

These pythons are easy to breed in captivity. The lifespan of these snakes is about 20 years.

While it is not possible to determine exactly how many of these pythons are there in the world currently, rough estimates suggest that they are about 30,000 or more. However, with time, their high demand has put them on the list of endangered reptile species because of human activities. They are high in demand as people hunt them down for skin and flesh. These pythons are listed as ‘vulnerable’ snake species.

Burmese pythons are carnivorous in nature and often feed on mice, rabbits as well as chickens.

Why are invasive Burmese pythons in Florida such destructive to local environments?

Burmese pythons have hunted most small mammals in the Everglades to catastrophic population declines because they’re a large predator that species in the environment aren’t adapted to. In addition, research has shown pythons in Florida are hybrids that also contain rock python DNA, this further suits them to the environment.

What do Burmese pythons eat?

Burmese pythons are carnivorous in nature and often feed on mice, rabbits as well as chickens.

Can a Burmese python kill you?

Reports do not suggest deaths from attacks by Burmese python snakes. However, it is common for these reptiles to attack people who are handling them. Sometimes, these attacks can prove to be deadly.

How dangerous are a Burmese python?

While the Burmese pythons can attack humans, deaths due to such attacks are not common.

Why are Burmese pythons a problem?

While the Burmese pythons are an important part of the food chain, they are responsible for disrupting the ecosystem due to the depletion of several animal populations.

While attacks on humans by the Burmese pythons may occur, barely any deaths have occurred as a result of this animal.

How do Burmese pythons affect the ecosystem?

The Burmese pythons make an important part of the food chain. However, they are responsible for disrupting the ecosystem due to the depletion of several animal populations.