If some of the harsher scenes of nature are too much for you to witness, you may want to skip past this video.

This attack occurred during the great wildebeest migration, which takes place every year. Millions of wildebeest migrate and are then followed by many zebras. This footage was captured in the greater Masai Mara Serengeti environment. The video opens with an illustration of the globe and a little red dot that points to where Masai Mara is located.

This clip is rather short and captures several zebras as they walk in succession through some shallow water. Unfortunately, these waters are infested with crocodiles, and just as the first two make it safely through the water, a third zebra jumps up, startled because a crocodile has grabbed one of its hind legs. You can sort of see the moment of realization for the zebra when it comes to a complete stop, and its mouth opens as if expressing pain.

It again attempts to jump out of the water but with its leg inside the croc’s mouth, it doesn’t get far. It starts kicking back against the croc’s face and that’s when you see how incredibly large this crocodile is. It looks about the size of the zebra (if not larger!).

Then, it begins the death roll. You can watch as it turns several times in the water, certainly breaking off the zebra’s leg. Other zebras make their way across the water, passing by the one that’s been injured. At this point, there really is no saving it.

The zebra stays in the water and ends up rolling once with the croc. It’s a devastating sight to watch as it looks around, seeming to acknowledge that it’s met its fate. Just as that sinking realization hits, you watch the croc emerge and take a bite out of the zebras behind. This is where it gets a bit more graphic and can be a bit much if you’re squeamish at the sight of blood. The zebra darts forward, attempting to escape the injurious teeth of the crock but the croc is not going to let it go. Just then, you see another croc emerge as the other zebras keep making their way across just a few feet away.

The injured zebra is still in the water, bleeding, and likely missing an entire limb. The croc approaches closer to the zebra’s head and neck, and that’s when the zebra takes a bite out of the croc’s neck. This was its final attempt to defend itself as it lays still in the water, too injured to move.

Luckily, the video cuts before you see the full takedown, but the text on the screen lets you know that eventually, the crocodiles get a hold of the zebra completely.

Watch Rafters Defend Against a Crocodile Attack in Dangerous Rapids! 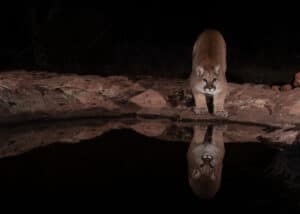