Click through all of our Whale Shark images in the gallery. 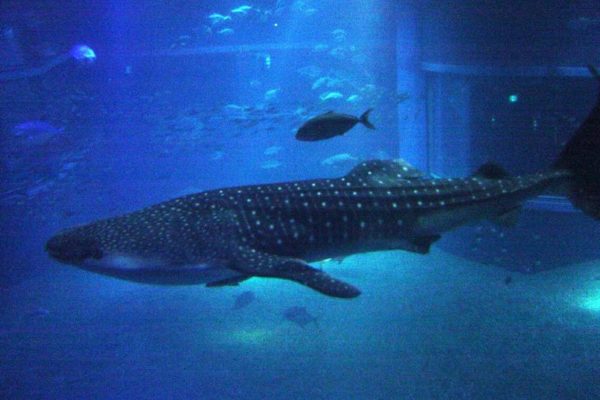 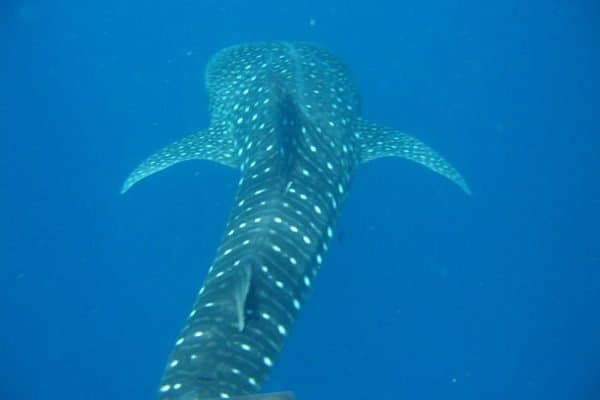 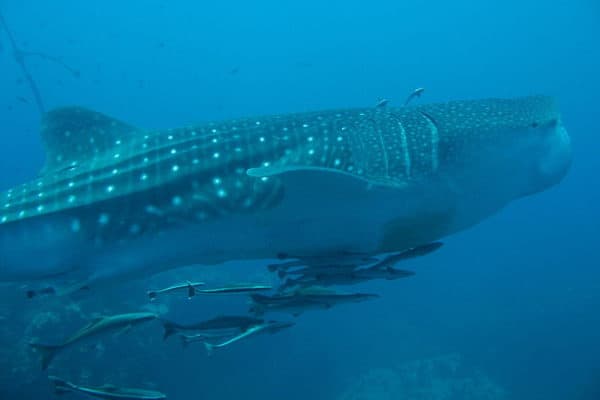 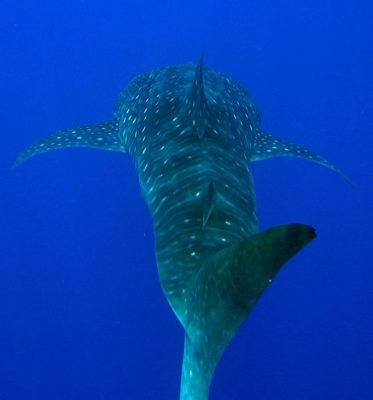 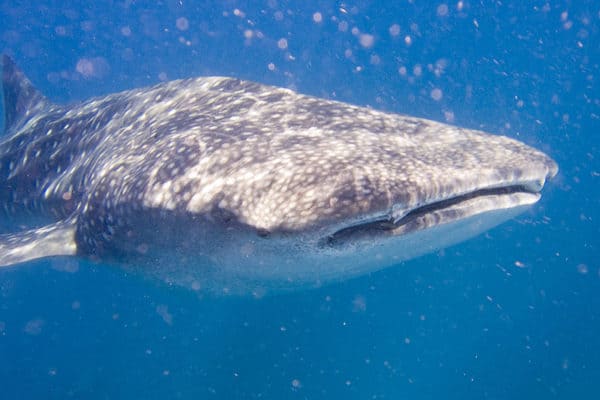 View all of the Whale Shark images!

Often growing to 40 feet or more, the mysterious whale shark is the largest living fish!

Despite their name, whale sharks are not whales, they are actually fish. Their name comes from their huge size. Often growing to 40 feet long or more, the whale shark is a fish that is about the size of a large school bus. These sharks are filter feeders, like many whales, and live on a diet of plankton and tiny krill or small fish. Whale sharks are generally peaceful fish and have been known to allow divers to hang onto their dorsal fins for a ride.

The whale shark’s scientific name is Rhincodon typus, which is derived from the Latin words for ‘rasp’ and ‘tooth.’ The whale shark has many layers of tiny, raspy teeth that provide the basis for the name.

Whale sharks are classified in the order Orectolobiformes, which also includes nurse sharks, and is in the class Chondrichthyes (or cartilaginous fish). It is the only member of the Rhincodontidae family of sharks.

The Whale Shark is the biggest fish in the world. It is a large fish that can grow up to 60 feet long, though most specimens reach about 40 feet in length and weigh about 15 tons. The largest known whale shark was measured at 62 feet in 2001, with a weight estimated to be over 60 tons.

These fish have the shape of a shark, but their mouths are in the front of their large, flat heads rather than underneath as with many sharks. Their mouths are large, with the mouth of an average-size shark reaching more than five feet wide, allowing them to scoop up their food as they swim. Whale sharks are dark gray on top and light underneath, with a series of light spots or stripes covering the dark parts of their bodies. This helps to camouflage them as they swim.

They tend to be non-aggressive and often allow themselves to be approached by divers who can gently interact with them without any problems. These huge fish will sometimes allow divers to grab their dorsal fins and will then tow them through the water, seemingly without concern. They sometimes swim up to boats and may even bump into the crafts, but this behavior appears to be done out of curiosity and is not intended to harm. They coexist well with other sea life unless they feel threatened.

These sharks are usually solitary, living by themselves except for at certain times of the year when they have been observed gathering in groups, called schools, for feeding, such as their annual migration to the coast of Australia.

These fish are found around the world, almost always in warm, tropical or temperate seas, with the exception of the Mediterranean Sea. They are typically found between latitude 30 degrees north and latitude 35 degrees south off the coasts of countries such as Belize, Mexico, Ecuador, the Philippines, Australia, and South Africa. They prefer water in the range of 21 to 30 degrees Celsius (70-80F), but they have been found in water as cold as 3 degrees Celsius (37.4F).

While they inhabit deeper waters across the oceans, they are most often found in shallow coastal waters where there is plenty of food for them.

Although this giant fish is indeed a shark, it does not hunt down large prey but instead survives on a diet that mainly consists of plankton. The shark also consumes other small prey such as anchovies, krill, sardines, jellyfish, mackerel, crab, and squid. These sharks will not eat very large food, including squid or crabs that have grown too big for it.

It is a passive feeder, a method that consists mainly of the shark swimming with its mouth open so it can suck in any available food. Once it has a mouthful of food, the shark will close its mouth and remove the water through its gills, leaving its prey trapped in the baleen filters. It can then swallow the food and open its mouth again to gather more prey.

The purpose of the shark’s teeth is unclear because this shark does not use its teeth for feeding. It is possible that the teeth may sometimes aid in the capture of small fish or jellyfish but this hasn’t been established.

Other shark species are actually some of the top whale shark predators, as well as other large oceanic predators. Great white sharks, tiger sharks, and orcas (also known as killer whales), all prey upon younger, smaller sharks, But, for the most part, such predators don’t prey on larger whale sharks because they’re just too big for predators to challenge.

Another threat to the continued existence of these sharks is humans. In some cases, humans kill them by accidentally catching them in fishing nets where they usually end up dying. These huge fish are also still hunted in some countries such as India, the Philippines, and China, where they are used for food, oil, and their fins.

These shark numbers have been decreasing, and in 2016 it was listed by the International Union for the Conservation of Nature (IUCN) as endangered, which means it is at high risk of becoming extinct in the wild.

Not much is known about these sharks’ reproduction, as these big fish can be evasive if they don’t wish to be seen. Their mating behavior is uncertain, as it is unlikely to be witnessed and, therefore, not well-documented. However, scientists do know that these sharks must be 25 to 30 years old before they are ready to breed.

Litter size is uncertain, but a litter of 300 whale shark babies (called pups) has been documented. The babies are about 21 to 25 inches long at birth.

Whale shark lifespan is not clearly known, but it is estimated around 70 years and scientists have determined that these big fish can live for over 100 years, possibly as long as 125 years.

No accurate counts of the worldwide whale shark population exist, but their numbers appear to be decreasing significantly in parts of the Atlantic and Pacific oceans. Many countries have banned or regulated the hunting of whale sharks, but such activities still occur in various parts of the world.

In China, hundreds of these fish are illegally killed each year, at least partly for their fins which are prized for their supposed medicinal qualities. The oil is also collected to be used in food and medicine, and the meat is used either fresh or salted as a food source for some people. Some estimates show a decline of about 75 percent of the whale shark population in certain parts of the Pacific Ocean. For this reason, their conservation status is listed by the IUCN as endangered.

Whale sharks are carnivores, but they don’t prey upon other animals in the way that people usually envision sharks doing. However, they do consume many types of tiny prey, including plankton, krill, anchovies, crabs, fish eggs, sardines, squid, and jellyfish. They only eat small prey, so if any of their normal prey grows too large the whale shark won’t eat them.

What are whale shark predators?

Although adult whale sharks don’t have much to fear from predators, juveniles and old or sick whale sharks are preyed upon by a variety of fish, including sharks and blue marlins. They are also vulnerable to predators such as killer whales and humans also hunt them in some areas of the world.

How big is a whale shark?

Is a whale shark a shark?

Yes, a whale shark is a shark. Their skeletons are made of cartilage, they breathe out of gills, lay eggs, and don’t nurse their young.However, instead of hunting down their prey and tearing it to bits with big, sharp teeth, whale sharks feed more like many whale species do, filtering tiny plankton and small fish and animals from the water to feed on. They strain the water through their built-in filtering system known as baleen, squirting out the water and swallowing the food they have collected. Whale sharks often swim with their mouths open to collect the food they need as they swim.

Is a whale shark bigger than a blue whale?

As a general rule, whale sharks are not dangerous and are generally not aggressive toward people. They often interact with divers or with people on boats in a peaceful, non-threatening manner. Young whale sharks have even been described by some observers as playful. Humans must keep in mind the enormous size of this animal, however, and be aware that a person could easily be accidentally injured by an adult whale shark.

What Kingdom do Whale Sharks belong to?

What phylum do Whale Sharks belong to?

What class do Whale Sharks belong to?

What family do Whale Sharks belong to?

What order do Whale Sharks belong to?

What genus do Whale Sharks belong to?

What type of covering do Whale Sharks have?

In what type of habitat do Whale Sharks live?

What is the main prey for Whale Sharks?

What is the average litter size for a Whale Shark?

The average litter size for a Whale Shark is 12.

What is an interesting fact about Whale Sharks?

Whale Sharks are the largest species of fish in the world!

What is the scientific name for the Whale Shark?

The scientific name for the Whale Shark is Rhincodon Typus.

How fast is a Whale Shark?

A Whale Shark can travel at speeds of up to 10 miles per hour.