Killer whales (orca) are massive aquatic mammals and members of the dolphin family. Even though these creatures may resemble other gentle giants in the sea, the killer whale lives up to its name. They are apex predators that live in every ocean around the world. Since they are at the top of the food chain, it’s only fair to ask, what do killer whales eat?

We’re going to take a closer look at the foods that killer whales prefer, how they hunt, and how they deal with captivity and competition.

The foods that killer whales eat include:

It is important to note that orcas live in a vast range around the world, and several types of killer whales exist. Some of them might subsist mostly on seals while others, like resident killer whales, will mostly eat fish.

Nevertheless, killer whales are not very picky when it comes to their food. They will feed on many foods to get the sustenance they need, and they need a lot of it!

How Much Do Killer Whales Eat?

Killer whales are very large mammals that can weigh anywhere between 6,600 to 8,800 pounds on average. Larger killer whales can weigh up to 12,000 pounds, with the largest weighing over 20,000 pounds.

They routinely reach 20 feet in length and longer orcas can be 32 feet long. These mammals need a tremendous amount of energy to keep themselves moving through the ocean waters.

On average, a killer whale will eat between 100 and 300 pounds of food each day. That amount can drop in certain conditions, such as when orcas are held in captivity. They require less energy for foraging in that case, so their food requirements are not as high.

How Do Killer Whales Hunt for Food?

The killer whale’s prey needs to worry about more than just their size and speed, capable of reaching bursts of 35 mph. Killer whales are highly intelligent creatures that hunt in very creative ways, including calling for some help.

Although the large size of whales might lead one to believe that they would need to hunt alone to find food, that’s not the case with killer whales. Killer whales will often hunt as a pod. Studies have revealed that some killer whales hunt in pods with as few as 7 members, while other gigantic pods will reach sizes of 40 killer whales.

The size of the pod ensures that they can track down food, surround them, and then move in for the kill. A common example of killer whales using teamwork to ensure they get a meal is when they encounter schools of fish. The orcas will creep up on the school from many directions, cutting off their avenues of escape.

Eventually, the fish will be effectively grouped up and guided towards the surface of the water. Once they are tightly packed, the whales will slam them with their massive tails, stunning or killing the fish outright. Then, the whales will pick them off while others keep herding the fish.

Another interesting facet of killer whales’ hunting habits is that they are smart enough to lay traps for other creatures. Researchers have witnessed orcas spitting fish near the surface of the water, waiting for birds to be enticed by the scent, and then eating both.

Needless to say, when you put together size, strength, speed, and smarts, you get one incredibly capable hunter.

What Do Killer Whales Eat in Captivity?

In captivity, killer whales do not have to hunt for their food, it’s delivered to them. In some cases, orcas are given food for completing certain tricks. Their diet is far different in captivity than in the ocean and is focused on optimizing their health and longevity. Also, it’s not exactly possible to source the diverse meals orcas have in the wild.

Killer whales being kept in captivity will usually eat about 1% to 3.5% of their body weight in the following foods:

These foods are similar to what some killer whales would eat in the wild. Moreover, every meal is tested for its nutritional value relative to the needs of the whale.

What Competes with Killer Whales for Food?

The killer whale might be at the top of the food chain, but it’s not the only carnivore swimming in the waters with a hunger to satisfy. The overlap in food supplies happens when other carnivores share the same diet or occupy the same area in large numbers.

Here is a list of the most frequent competitors for killer whales’ food:

This list should not be used to insinuate that any of the creatures will kill an orca and take its food. There is simply an overlap between their preferred meals. For instance, sea lions and seals might feast on the salmon that killer whales need to survive, but they’ll either flee or be eaten if a pod of hungry killer whales shows up.

Killer whales are top-tier predators that use their intelligence and size to hunt down a variety of creatures. Sadly, they are not doing well as a species. Some types of killer whales are considered endangered from humans hunting them in the past, pollution, and the loss of their preferred foods.

The future might see some of those smaller types disappearing entirely, but more studies are needed to investigate and overcome the obstacles to their survival.

As apex predators, killer whales have no known natural predators. Their lone threat from other animals has been from humans, who reduced their populations dramatically across the 20th century. In fact, killer whales are such fearsome predators that researchers from the Monterey Bay Aquarium discovered that when they entered an area great white sharks would flee! The research found that when killer whales arrived at a marine sanctuary near San Franciso, great whites would leave for an entire season.

Killer whales have not only been observed hunting great white sharks but can even hunt the world’s largest animal, the blue whale. In March 2021, a whale-watching tour of the coast of Australia discovered a massive pod of orcas hunting a blue whale that was estimated to be more than 50 feet in length. 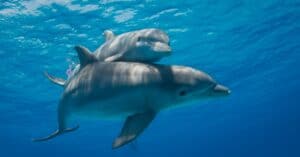 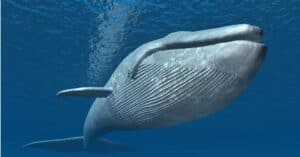 What Do Blue Whales Eat?