Too Big To Hunt? What Eats Whale Sharks

Did you know that whale sharks are the largest fish worldwide? It might sound surreal that other fishes can catch and feed on them, right?! Even though whale sharks do not have natural animal predators, juvenile, old, or sick individuals are often killed by other marine species. Moreover, adult whale sharks are subject to human hunting. Because of this, along with their long lifespan, and late maturation, whale sharks are now considered endangered.

What are Normal Behavior of Whale Sharks?

Whale sharks are enormous sharks, hence their name. Their scientific name is Rhincodon typus, and they are members of the Orectolobiformes order.

Whale sharks are considered the largest fish in the world. Evidence shows that it can grow as long as 40 feet, which equals a giant school bus. That’s impressive, isn’t it?

Other studies show that the average length of male whale sharks is 26 to 30 feet; they only rarely grow larger than 40 feet. Female whale sharks grow bigger, reaching an average of 48 feet. They weigh approximately 15 tons.

Unfortunately, there isn’t a 100% accurate number that would indicate the exact length of a whale shark because it’s complicated to measure them both on land and in water.

Whale sharks live in tropical and warm-temperate waters in coastal and oceanic habitats. Like tiger sharks, whale sharks are migratory. They have two subpopulations. The first is the Atlantic subpopulation that can be found from Maine and the Azores to Cape Agulhas. The second is the Indo-Pacific population located in the Bay of Fundy, Canada, the Sea of Okhotsk, Victoria, Australia, and many other places. Whale sharks tend to gather together for seasonal feeding. In 2011, the Yucatan Coast registered a gathering of 400 whale shark individuals!

Is a whale shark a top predator?

Suppose we were to judge based on the definition of “apex predator” provided by the Merriam-Webster dictionary, mainly that an apex predator is “a predator at the top of a food chain that is not preyed upon by any other animal.” In that case, whale sharks are not apex predators.

On the other hand, Wikipedia mentions that apex predators do not have natural predators, which may indicate that whale sharks are indeed top predators. That’s because their predators usually feed only on juvenile, old, or sick whale sharks that can’t defend themselves.

What are the predators of whale sharks?

Although whale sharks do not have natural animal predators, some aquatic species feed on juvenile, old, or sick whale sharks. Moreover, they’re slower than other marine species and tend to swim at the surface. This makes them an easy target, despite their large size.

Let’s discuss some species that may eat whale sharks if the circumstances favor them, as well as human hunting that threatens whale sharks.

Great white sharks are large sharks living in temperate and tropical coastal waters. They grow as long as 20 feet and weigh as much as 4,200-5,000 pounds. These sharks rank first among the world’s most dangerous and aggressive sharks! They usually feed on seals, porpoises, dolphins, sea lions, and small whales and sharks. Killer whales threaten juvenile great white sharks.

Tiger sharks are requiem sharks in the Galeocerdo genus. They live in tropical and subtropical waters and migrate when the weather gets cold. They grow as large as 10-14 feet long. Female tiger sharks are bigger than males. Tiger sharks are also called garbage eaters because their unique teeth allow them to eat almost anything. However, they mainly feed on turtles, squid, dolphins, and smaller sharks. Some small tiger sharks are caught and eaten by killer whales.

Orcas are also called killer whales and are the biggest members of the dolphin family. Orcas have a black back and a white underside. These marine animals live in both cold and warm waters.

Orcas can grow as large as 32 feet long and weigh as much as 6 tons. Their dorsal fin alone can be six feet long. These massive animals can eat up to 300 pounds of food a day! They feed on salmon, sea lions, harbor seals, porpoises, gray whales, squid, and sharks.

Killer whales do not have animal predators but are threatened by pollution and commerce.

Black marlins live in the Indian and Pacific oceans, in tropical and subtropical waters. They can grow up to 15 feet long, which makes them one of the largest bony aquatic creatures. Black marlins weigh approximately 1,653 pounds. They are speculated to swim at speeds of up to 80 miles per hour. They are considered among the fastest fish in the world!

Black marlins feed on squid, cuttlefish, large crustaceans, and even small sharks. They do not have any animal predators.

Blue sharks are requiem sharks. They migrate to feeding and breeding areas and live in warm waters. Their big round eyes and long pectoral fins help distinguish them from other sharks. Blue sharks feed on cephalopods, bony fish, seabirds, and other smaller sharks, including small whale sharks. Their predators are great white sharks, tiger sharks, elephant seals, sea lions, and killer whales.

Sometimes people catch whale sharks accidentally, and they end up dying. However, most people actually hunt and kill whale sharks for their flesh, cartilage, bones, and liver oil. Hunting whale sharks is common in India, China, and the Philippines. There are even whale shark markets in China and Taiwan where the meat is sold at high prices. 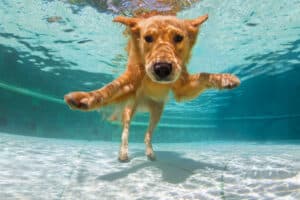