Click through all of our Aardvark images in the gallery. 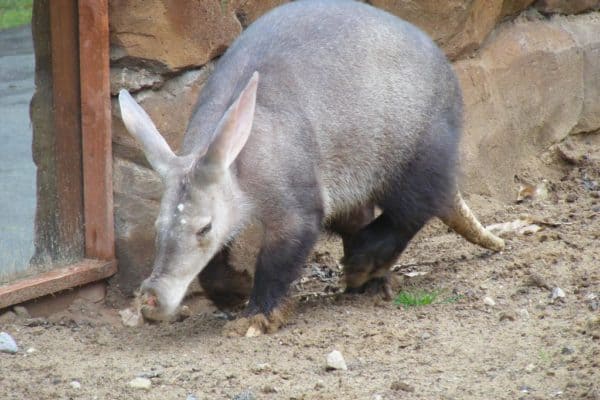 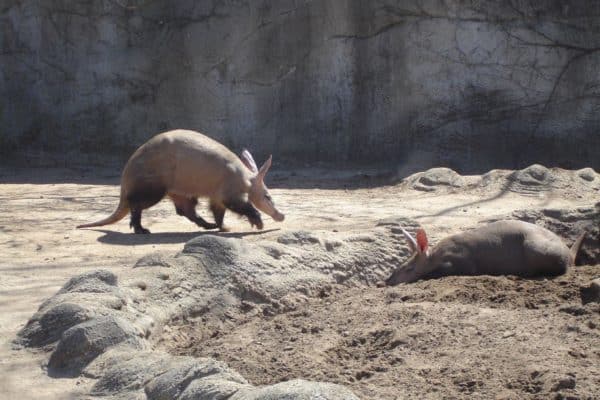 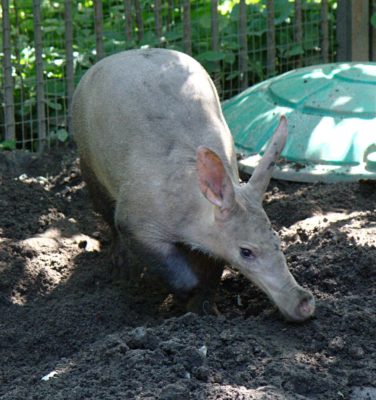 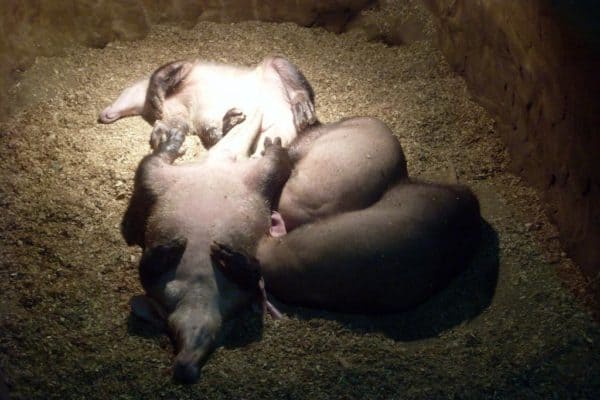 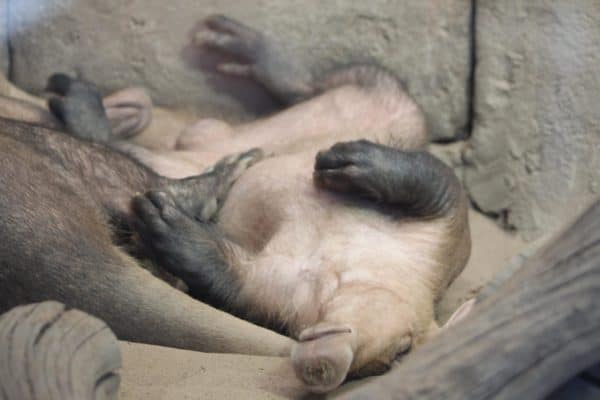 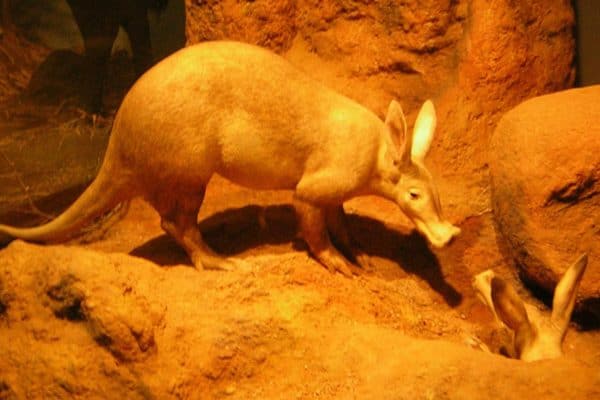 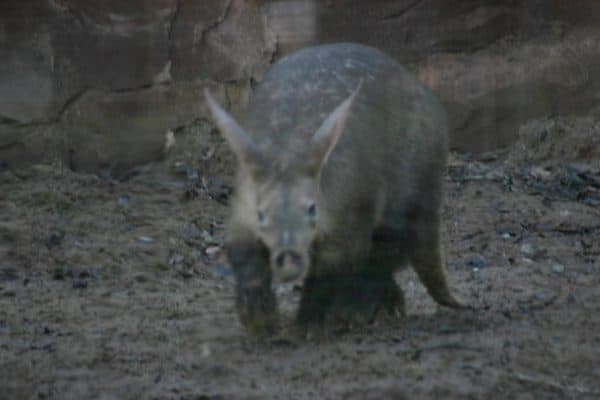 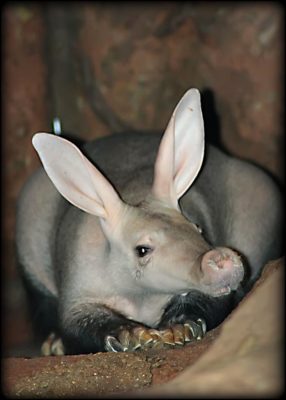 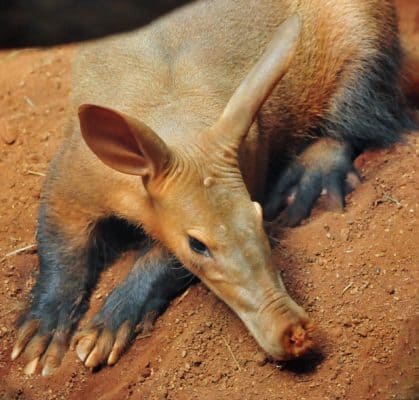 View all of the Aardvark images!

Aardvarks are small pig-like mammals that are found inhabiting a wide range of different habitats throughout Africa, south of the Sahara. They are mostly solitary and spend their days sleeping in underground burrows to protect them from the heat of the African sun, emerging in the cooler evening to search for food. Their name originates from the Afrikaans language in South Africa and means Earth Pig, due to their long snout and pig-like body. Aardvarks are unique among animals as they are the only surviving species in their animal family. Until recently it was widely believed that they were most closely related to other insectivores such as armadillos and pangolins but this is not the case with their closest living relatives actually thought to be elephants.

Aardvarks have a unique appearance amongst mammals (and indeed all animals) as they display physical characteristics of a number of different animal species. They have medium-sized, almost hairless bodies and long snouts that make them look distinctly pig-like at first, with thick skin that both protects them from the hot sun and also from being harmed by insect bites. They are able to close their nostrils to stop dust and insects from entering their nose. They have tubular, rabbit-like ears that can stand on end but can also be folded flat to prevent dirt from entering them when they are underground. Aardvarks have strong, claws on each of their spade-like feet that along with the fact that their hind legs are longer than their front legs, makes them strong and capable diggers able to excavate vast amounts of earth at an alarming rate. Due to the fact that they spend most of their lives underground or out hunting in the dark at night, they have poor eyesight but are able to easily navigate their surrounding using their excellent sense of smell to both find prey and to sense potential danger.

Aardvarks are found in a wide variety of different habitats throughout sub-Saharan Africa from dry deserts to the moist rainforest regions. The only stipulation (other than having good access to plenty of food and water) is to have good soil in which they can dig their extensive burrows. Despite being highly skilled at digging in sandy or clay soil types, rockier regions prove more of a challenge to create their underground homes so the aardvark will move to another area where soil conditions are better suited to digging. Their burrows can be up to 10 meters (33 ft) long in a home range that can be anywhere from 2 to 5 kilometres square. Their burrows often having multiple entrances and are always left head first so they are able to identify potential predators easily using their keen sense of smell.

Aardvarks are mainly solitary animals that come together only to mate and are never found in large groups. They live in underground burrows to protect them both from the hot daytime sun and from predators. Aardvarks are nocturnal mammals, only leaving the safety of the burrow under the cover of night when they go in search of food and water, often travelling several miles in order to find the biggest termite mounds guided by their excellent hearing and sense of smell. Despite often having a large burrow comprised of an extensive network of tunnels, aardvarks are also known to be able to quickly excavate small temporary burrows where they can protect themselves quickly rather than having to return to their original dwelling.

Aardvarks have specific mating seasons that occur every year. Depending on the region in which the aardvark lives young can be born either in October to November, or May to June in other areas. Known to have babies most years, female aardvarks give birth to a single offspring after a gestation period that usually lasts for around 7 months. Newborn aardvarks often weigh as little as 2kg and are born with hairless, pink skin in the safety of their mother’s burrow. Baby aardvarks spend the first two weeks of their lives in the safety of the underground burrow before beginning to venture out with their mother under the cover of night. However, despite accompanying their mother in search of food they aren’t weaned until they are around three months old. Young aardvarks live with their mother in her burrow until they are around six months old when they move out to dig a burrow of their own. Although their lifespan in the wild is not entirely clear, aardvarks tend to live for more than 20 years in captivity.

The diet of aardvarks is mainly comprised of ants and termites, with termites being their preferred food source. Despite this though, they are known to also eat other insects such as beetles and insect larvae. Aardvarks are built to be insectivores, with strong limbs and claws that are capable of breaking into the harder outer shell of termite mounds very efficiently. Once they have broken into the mound they then use their long, sticky tongue to harvest the insects inside and eat them whole without chewing as they are then ground down in their muscular stomachs. One of the aardvarks most distinctive features is the fact that they have columnar cheek-teeth that serve no functional purpose at all. With some larger ant species that need to be chewed they use the incisors that are located towards the back of their mouths. Aardvarks are also able to use the same techniques to break into underground ant nests.

Despite the fact that aardvarks are nocturnal animals that live in the safety of underground burrows, they are threatened by a number of different predators throughout their natural environment. Lions, leopards, hyenas and large snakes (most notably pythons) are the main predators of aardvarks but this does vary depending on where the aardvark lives. Their main form of defence is to escape very quickly underground however, they are also known to be quite aggressive when threatened by these larger animals. Aardvarks use their strong, sharp claws to try and injure their attacker along with kicking the threatening animal with their powerful back legs. Aardvarks are also threatened by humans who hunt them and destroy their natural habitats.

Aardvarks use their long, sticky tongue to lap up to 50,000 insects a night from inside termite mounds or underground ant nests. Their worm-like tongues can actually grow up to 30 cm in length meaning they can reach more termites further into the mound. Their love of insects has actually led aardvarks also being known as Antbears! Interestingly enough, aardvarks are also thought to get almost all of the moisture they need from their prey meaning that they actually have to physically drink very little water. Aardvarks are thought to be one of the world’s most prolific diggers with their strong limbs and claws and shovel-like feet helping them to be able to shift 2ft of soil in just 15 seconds!

Due to the fact that they spend the daytime hours hidden in the safety of their underground burrows, only emerging under the cover of night to hunt for food, aardvarks are very seldom seen by many people. In some regions though, they are hunted by people for food and are becoming increasingly affected by expanding human populations as more of their natural habitats disappear to make way for growing settlements.

Today, aardvarks are listed by the IUCN as a species that is of Least Concern. Despite the fact that population numbers of aardvarks most certainly declined in some countries, in others, their numbers remain stable and they are often commonly found in both protected areas and regions with suitable habitats. They are however becoming increasingly affected by habitat loss in both the form of deforestation and expanding towns and villages. Due to their incredibly elusive nature, exact population sizes are not fully understood.

Are Aardvarks herbivores, carnivores, or omnivores?

Aardvarks are Omnivores, meaning they eat both plants and other animals.

What Kingdom do Aardvarks belong to?

Aardvarks belong to the Kingdom Animalia.

What phylum do Aardvarks belong to?

Aardvarks belong to the phylum Chordata.

What class do Aardvarks belong to?

Aardvarks belong to the class Mammalia.

What family do Aardvarks belong to?

Aardvarks belong to the family Orycteropodidae.

What order do Aardvarks belong to?

Aardvarks belong to the order Tubulidentata.

What type of covering do Aardvarks have?

Aardvarks are covered in Hair.

What type of covering do Aardvarks have?

Aardvarks are covered in Hair.

Where do Aardvarks live?

What are some predators of Aardvarks?

Predators of Aardvarks include lions, leopards, and hyenas.

How many babies do Aardvarks have?

The average number of babies an Aardvark has is 1.

What is an interesting fact about Aardvarks?

Aardvarks can move 2 feet of soil in just 15 seconds!

What is the scientific name for the Aardvark?

The scientific name for the Aardvark is Orycteropus afer.

What is the lifespan of an Aardvark?

Aardvarks can live for 23 years.

What is a baby Aardvark called?

A baby Aardvark is called a cub.

How many species of Aardvark are there?

There are 18 species of Aardvark.

What is the lifespan of an Aardvark?

Aardvarks can live for 23 years.

What is a baby Aardvark called?

A baby Aardvark is called a cub.

How many species of Aardvark are there?

There are 18 species of Aardvark.

What is the biggest threat to the Aardvark?

The biggest threat to the Aardvark is habitat loss.

What is another name for the Aardvark?

The Aardvark is also called the antbear or Earth pig.

How many Aardvarks are left in the world?

The population size of the Aardvark is unknown.

How fast is an Aardvark?

An Aardvark can travel at speeds of up to 25 miles per hour.