Inhabits the jungles of the far east!

Click through all of our Pademelon images in the gallery. 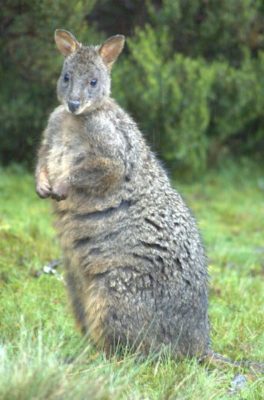 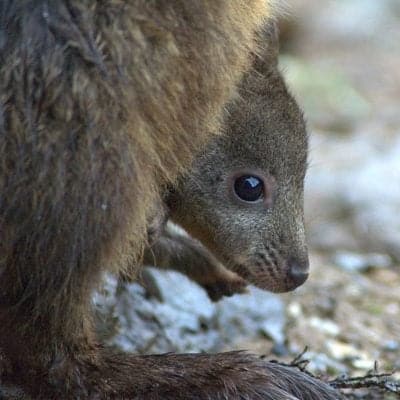 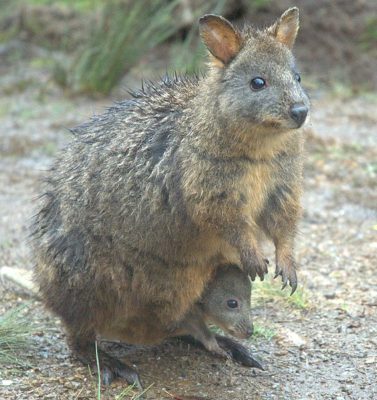 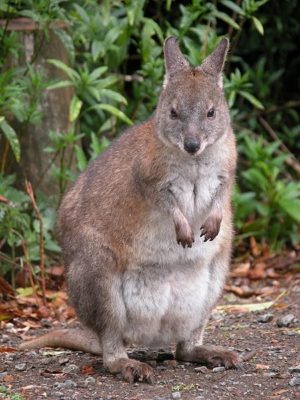 View all of the Pademelon images!

A cousin of the kangaroo and the wallaby

Found in Australia’s forest and island areas, the pademelon is a small to mid-size marsupial. It is a solitary animal and a nocturnal one. There are seven pademelon species, but the animal’s population numbers are suffering because many of them are losing their habitats and being hunted. When awake, pademelons forage for berries, herbs, grass and leaves. If the animal detects a predator, it uses its hind legs to thump the ground, alerting other nearby forest animals of the danger.

• The animals are usually a blend of black, brown, gray and red

• Male pademelons are typically about twice as large as females

The pademelon’s scientific name is Thylogale, and the animals are a part of the Macropodidae family. They are of the Mammalia class and included in the Macropodidae subfamily. The definition of “macropod” is big foot. This is a trait that’s common in marsupials like the pademelon. Often, macropods feature back legs that are much bigger than their front legs. Members of this family also often have large back feet and powerful tails that help them balance.

The name pademelon comes from the Dharuk Aboriginal word “badimaliyan.” The seven different types of pademelons are Tasmanian, Brown’s, dusky, Calaby’s, mountain, redlegged and red-necked. The dusky pademelon has had many names. In the past, locals called it the Aru Islands wallaby. Before that, it was known as the philander, which means friend of man. In the second series of the book “Travels” by Cornelis de Bruijin, characters called it philander.

Small and similar in body shape to their kangaroo and wallaby cousins, you can tell that you’ve come across a pademelon from its shorter height and thicker body. Pademelons get around by hopping on their hindlegs. They carry their front legs high into their bodies in front of them, and they have small paws and sharp claws.

Pademelons have soft fur, and they generally feature a dark stripe along the cheek that extends from the side of their mouth to just behind the eye. Over the dark stripe is a section of white fur. The animal has a lighter color fur on its belly than it does on its back and legs. Pademelons have a noticeable stripe along the hip too. The animal has a short, stubby tail that’s covered with a small amount of sparse fur. Their feet are soft and coated with dark brown fur. The animal species have round ears that give it Giving it a mouse-like appearance. Female pademelons have a belly skin fold that covers a furry pouch.

When it comes to behavior, pademelons prefer to be on their own. The only time that they meet up is to mate and sporadically graze together in grassy clearings. The animal species travels long distances looking for food. They make their way through the forest from early in the morning until evening. To keep up their energy, the animals rests several times a day. As pademelons travel to and from their grazing areas, they form tunnels and trails through the foliage.

Pademelons are harmless, curious animals that often permit people to walk up to them for a photo opportunity before hopping slowly away. A fully mature male pademelon can grow to weigh as much as 15 pounds. Female pademelons usually weigh about 8 pounds. An adult animal’s length is from around 3.3 feet to almost 5 feet. You can recognize a male pademelon by its larger body size, defined muscles and broad forearms and chest.

Pademelons make their homes in rainforest areas, particularly in thick eucalypt forests. The animals prefer to live near the forest’s edge. They make their homes in coastal areas of Australia, Tasmania and Papua New Guinea. You’ll find red-necked pademelons in the areas of New South Wales and Queensland. They also live in the south-central part of New Guinea. If you’re in Tasmania and come across a pademelon, it will likely be a red-bellied or Tasmanian one. Years ago, this type of pademelon also lived in the southeastern region of Australia’s mainland. New Guinea is home to the dusky pademelon. This part of the world features a humid subtropical climate, one with cool winter temps, warm summers and plenty of rain year-round.

What do pademelon’s eat? Pademelons are herbivores, eating grass, leaves, herbs, berries, ferns, mosses and shoots. The Tasmanian pademelon dines on nectar-bearing flowers when available, while the red-legged pademelon typically eats fallen leaves. This type of pademelon may also obtain sustenance from fruit like the Moreton Bay fig and the Burdekin plum. In some cases, the animals eat tree bark and young trees.

The pademelon’s main predators include dogs, foxes, wedge-tail eagles, quolls, Tasmanian devils and feral cats. Humans are also a threat to the species due to clearing land to make way for homes, farmland, and other developments. This same trend has resulted in kangaroos and wallabies seeking new habitats in areas where pademelons generally live, which also decreases the food supply for all of the species. Another risk to pademelons are rabbits. While not a predator, rabbits are a competing species that consumes the same grasses as pademelon’s and can reduce the availability of a primary food source.

In the past, aborigines and the area’s settlers also valued pademelon meat. In Tasmania and the state’s outer islands, residents kill off pademelons to keep their numbers low. Residents also hunt them for their meat and fur. According to the IUCN red list pademelon range from least concern to endangered, based on the specific species.

Pademelons breed year-round, and they are polygynandrous, meaning they have multiple partners. While the animal species technically breeds all year long, an estimated 70% of their births happen toward the start of the winter months. When a male selects a mate, he makes soft noises at her. The sound is similar to the one that a female makes when she is calling to her baby to come to her. For the species, fertilization happens internally with the gestation period lasting for an estimated 30 days. Pademelons usually only have one baby, and when it is born, it is a small, blind, defenseless, furless embryo.

Like kangaroos, an embryo pademelon is called a joey. Right after the joey is born, the baby makes his or her way from the mother’s birth canal to her pouch. Once there, it attaches itself to one of her teats. Female pademelons have four teats. The joey will live and grow from this undeveloped state within its mother’s pouch until it reaches 6 months old. At this age, the joey will start to venture outside of the female pademelon’s pouch. Baby pademelons return to their mother’s pouch for food until mom decides to wean him or her. Weaning usually happens between 8 months old and 12 months old.

Kangaroos experience birth the same way. When a baby kangaroo is born, it is usually about 2 centimeters long. Kangaroo babies typically weigh less than one gram. Just like pademelon joeys, kangaroo joeys make their way to their mother’s pouch and attach themselves to one of her teats. Kangaroo joeys stay in their mother’s pouch until they are 7 months to 10 months old.

Pademelon joeys have the birth advantage of being protected by their mothers until they are big and strong enough to take care of themselves. The animal species becomes sexually mature at 14 months to 15 months old.

Pademelons live for 4 years to 8 years when they are living in the wild. In captivity, they live for around 10 years. According to disease surveys, pademelons can suffer from toxoplasma. When the animals are kept as pets, they may contract roundworm along with selenium and vitamin E deficiencies. They can also get salmonellosis, which is a mouth disease. If you decide to keep one as a pet, be sure to take your animal friend to an exotic vet annually.

What’s the Difference Between a Wallaby and a Pademelon?

There are several differences between pademelons and wallabies. Pademelons are smaller with stubby tails that are thicker than a wallaby’s tail with a slight amount of hair. Pademelons have smaller ears too. However, both species move from place to place by hopping.

Can You Eat Pademelon?

Locals ate pademelon meat in the past, and you may find it on the menu in some restaurants that sell game meat. According to statistics, an estimated 30,000 to 40,000 pademelons and Bennetts Wallabies are killed annually for the domestic meat market. They are used for pet food and sold to restaurants. Under Tasmania’s commercial and recreational licenses, there are no restrictions on the number of animals that hunters can kill.Shooting pademelons has a negative effect on the animal’s population. Hunters aim for the larger animals, which impacts the pademelon population since the larger animals are usually males. As a result, the population experiences a gender balance issue that can cause long-term effects on the population’s diversity. Some hunters use dogs to scare the animals out of their habitats. Dogs cause the animals to experience stress, injuries and death.

What is a Small Wallaby Called?

Small kangaroos are typically referred to as wallabies. The term refers to a kangaroo that has hind feet that are less than 25 cm long. The tammar wallaby, which is from the southwestern part of Australia, and the parma wallaby, from New South Wales, are the smallest known wallabies in the world.

Are Pademelons Native to Tasmania?

Are Pademelons herbivores, carnivores, or omnivores?

What Kingdom do Pademelons belong to?

Pademelons belong to the Kingdom Animalia.

What phylum do Pademelons belong to?

Pademelons belong to the phylum Chordata.

What class do Pademelons belong to?

Pademelons belong to the class Mammalia.

What family do Pademelons belong to?

Pademelons belong to the family Macropodidae.

What order do Pademelons belong to?

Pademelons belong to the order Diprotodontia.

What genus do Pademelons belong to?

Pademelons belong to the genus Thylogale.

What type of covering do Pademelons have?

Pademelons are covered in Fur.

In what type of habitat do Pademelons live?

What do Pademelons eat?

What are some predators of Pademelons?

Predators of Pademelons include foxes, dogs, and dingos.

What is the average litter size for a Pademelon?

The average litter size for a Pademelon is 1.

What is an interesting fact about Pademelons?

Pademelons inhabit the jungles of the far east!

What is the scientific name for the Pademelon?

The scientific name for the Pademelon is Thylogale.

What is the lifespan of a Pademelon?

Pademelons can live for 4 to 8 years.

What is the lifespan of a Pademelon?

Pademelons can live for 4 to 8 years.

How fast is a Pademelon?

A Pademelon can travel at speeds of up to 34 miles per hour.