Females have a deep pouch on their front! Click through all of our Kangaroo images in the gallery. 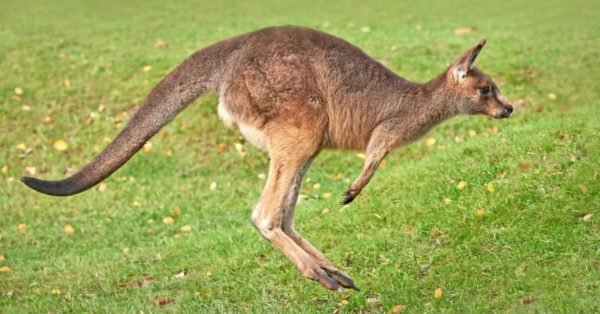 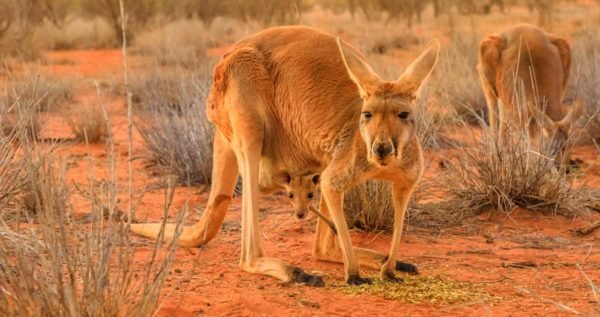 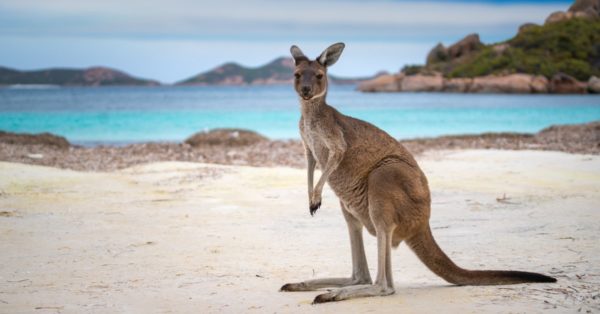 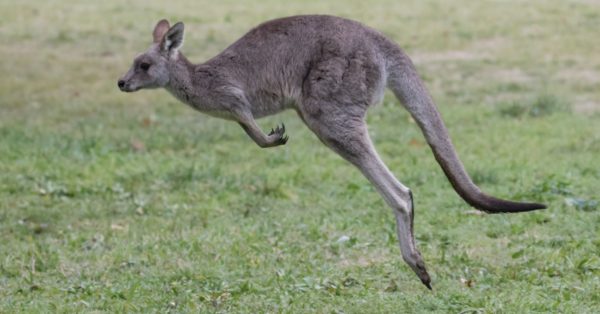 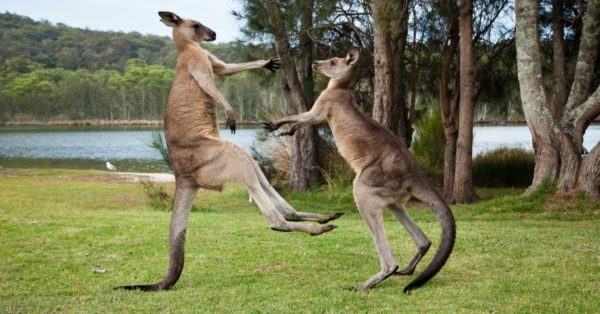 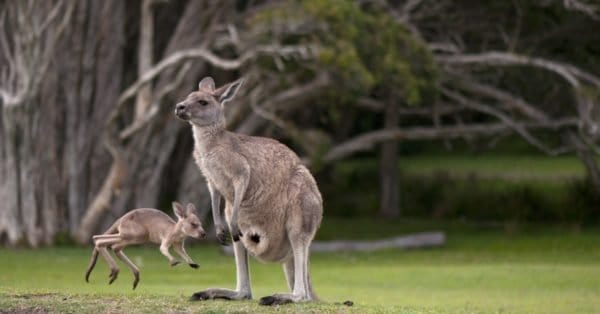 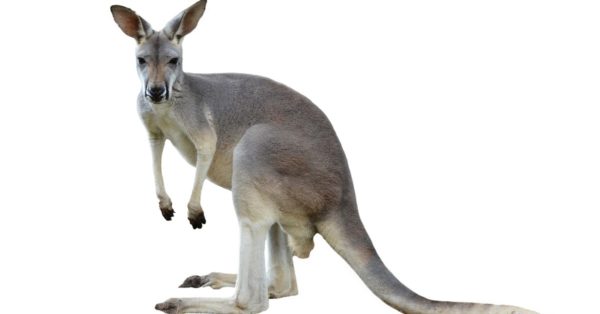 View all of the Kangaroo images!

The kangaroo is among the most remarkable leapers of the animal kingdom.

When it’s in motion, the kangaroo hops completely clear off the ground, covering up to 30 feet in a single swift motion. No other large animal of this size has the same ability. As the national symbol of Australia, the kangaroo adorns a coat of arms, coins, and even the logos of sports teams and organizations. It has adapted very well to the presence of humans.

The kangaroo is formally defined as several large, hopping marsupials in the genus Macropus. This scientific name derives from the word macropod, which means “large foot” in Latin. The four main species in this classification are the red kangaroo, western gray kangaroo, eastern gray kangaroo, and antilopine kangaroo. The black wallaroo and common wallaroo are also sometimes considered to be a true kangaroo as well. The wallaby is not considered to be a true kangaroo, but it’s similar enough to be a member of the same genus classification, Macropus. All of these species are part of the same family, which goes by the scientific name of Macropodidae.

The difference between a kangaroo, wallaroo, and a wallaby mostly comes down to size. Kangaroos are the largest members of the genus, while the wallabies are the smallest. Wallaroos, as the name implies, have an intermediate size between the kangaroo and the wallaby. Otherwise, their anatomy is fairly similar.

This animal’s most important anatomical feature is the exceptionally long hind legs. These legs are specifically adapted for bipedal hopping at distances up to 30 feet and a height of up to 10 feet. The animal has a unique arrangement of digits. Each hind foot consists of four individual toes, but only the big toe bears most of the animal’s weight. The second and third toe are actually fused together and highly reduced. The kangaroo’s hands have five digits and sharp claws. They are somewhat similar to human arms, but they lack opposable thumbs.

These animals also have a unique body shape to match its lifestyle. The body is defined by the big, arched back and a comparatively small head that ends in a sleek snout and big rounded ears. Another important feature is the long, thick tail, which serves as a kind of third leg to help it properly balance on the ground. The kangaroo’s coat color can vary between a rusty red and bluish-grey.

These animals take the crown as the world’s largest marsupial. Depending on the species, it stands about 3 to 7 feet tall and weighs 40 to 200 pounds. Females (also known as jills or does) are slightly smaller compared with the males (which are called jacks or boomers). Females also have a forward-opening pouch with four teats.

The kangaroo is a highly social animal that likes to congregate in groups of between 10 and 100 individuals at a time, which are known as mobs, troops, or herds. The most common social arrangement involves a group of females, their offspring, and one or more males. However, since individuals can move around independently, these mobs only have a loose organization. The primary benefit is that groups offer protection and security for all of their members. An individual can signal for the presence of danger by beating its tail against the ground.

These animals have numerous other ways to communicate with each other. These include eye contact, sniffing, touching, and vocalizations. They will seek to avoid confrontation when they can, but both males and females may fight each other for limited resources. The familiar boxing behavior for which they are known is a male-only competition to determine who gets access to females. These matches take a ritualized form in which one male issue a challenge and the other male can accept or decline. The males will lock arms, push each other, and kick out while standing on the tail.

The kangaroo is a very fast and agile animal that can achieve a top speed of about 40 mph and a consistent speed of around 20 to 25 mph. Because of its powerful leg muscles and big tail, the kangaroo actually expends less energy at this moderate cruising speed than at slower speeds. This allows it to outlast predators who may grow weary of the chase.

Kangaroos have the ability to feed at all hours of the day. However, they are most active at night or in other periods of low light. Most individuals stay within a well-defined home range and don’t move around too much except when they’re pursued.

The kangaroo is found exclusively in Australia, Tasmania, and the surrounding islands. Each species has a different geographical range. The red kangaroo, which has the widest range, can be found all over the open plains of inland Australia. The eastern and western grey kangaroo species are found in the east and west, respectively. The antilopine kangaroo occupies the northern part of the country.

Kangaroos can live in a wide variety of different habitats, including grasslands, savannas, and bushlands with sparse woods or no trees at all. They are well-adapted for life in hot, dry conditions and can survive for long periods of time without water.

What does the kangaroo eat?

The kangaroo’s diet largely consists of grass, shrubs, and many different types of flowering plants.

These animals are hunted by both people and other animals. They have been used as food and resources since people first arrived on the island some tens of thousands of years ago. Even today, many thousands of kangaroos are hunted and culled every year. Despite a large number of kangaroos killed, this has had minimal effect on their conservation status. In fact, like deer in the United States, kangaroo hunting is regulated and even encouraged as a way to control wild population numbers.

What eats the kangaroo?

A fully grown adult kangaroo has few natural predators in the wild. However, dingoes, feral cats, foxes, and raptors, many of which have been introduced by humans over the millennia, do sometimes feed on juveniles or dead kangaroos.

The kangaroo is not limited to a single established breeding season. Instead, it can choose to mate at any time throughout the year as circumstances dictate. This means it is more likely to reproduce when resources are particularly bountiful. Kangaroos engage in a brief courtship period but do not form long-term pair bonds after copulation. Since reproduction is a bit of a free for all, males compete with each other to monopolize access to females. The male plays no other role in the development of the young.

After a month-long gestation period, the young joey is born hairless, helpless, and completely blind, measuring no more than an inch in size. The first thing it does is crawl into the mother’s pouch and attach it to her teat. It remains there for 120 to 400 days. Even after it emerges from the pouch, the young kangaroo will remain with its mother for another year and a half, growing to its adult size.

If resources are particularly plentiful, then the mother has the ability to take care of three offspring at the same time: the undeveloped embryo, the joey inside of the pouch, and a joey outside of the pouch. The embryo can enter a dormant state, known as diapause, for as long as necessary until the other baby has left the pouch. The mother’s anatomy is specifically adapted to deal with this. She has the ability to produce two different types of milk, one for the newborn joey and one for the larger juvenile. This allows her to maximize the number of offspring she can raise at one time. It may help the kangaroo recover quickly from long periods of drought, during which time reproduction is suspended to conserve resources for the mother.

If the joey’s development goes smoothly, then it can expect to reach sexual maturity within the first two years of age. The life expectancy of the typical kangaroo is around 20 years in the wild, though some individuals have been known to live longer.

According to the IUCN Red List, the current classification of the four kangaroo species, plus the common wallaroo, is least concern. Only the black wallaroo is considered to be near threatened. The best population estimates suggest that tens of millions of kangaroos roam across Australia.

Kangaroos in the Zoo

The San Diego Zoo is one of the major destinations in the United States for both red and gray kangaroos and several wallaby species. Their Walkabout Australia section, which opened at the Safari Park in 2018, allows visitors to walk along the pathways among the grassy habitat and get an up-close view of the animals. Other major destinations include the Denver Zoo, Saint Louis Zoo, Detroit Zoo, Cincinnati Zoo and Botanical Garden, Philadelphia Zoo, Dallas Zoo, San Francisco Zoo, Columbus Zoo and Aquarium, and much more.

Are Kangaroos herbivores, carnivores, or omnivores?

Kangaroos are Omnivores, meaning they eat both plants and other animals.

What Kingdom do Kangaroos belong to?

Kangaroos belong to the Kingdom Animalia.

What class do Kangaroos belong to?

Kangaroos belong to the class Mammalia.

What phylum to Kangaroos belong to?

Kangaroos belong to the phylum Chordata.

What family do Kangaroos belong to?

Kangaroos belong to the family Macropodidae.

What order do Kangaroos belong to?

Kangaroos belong to the order Diprotodontia.

What type of covering do Kangaroos have?

Kangaroos are covered in fur.

In what type of habitat do Kangaroos live?

What is the main prey for Kangaroos?

What are some predators of Kangaroos?

Predators of Kangaroos include humans and dingos.

How many babies do Kangaroos have?

The average number of babies a Kangaroo has is 2.

What is an interesting fact about Kangaroos?

Female Kangaroos have a deep pouch on their front!

What is the lifespan of a Kangaroo?

Kangaroos can live for 4 to 10 years.

How fast is a Kangaroo?

A Kangaroo can travel at speeds of up to 35 miles per hour.

Kangaroos are shy and withdrawn by nature. They will rarely attack humans without being provoked first. However, they are best avoided, since if they do attack, their kicks can do serious harm to a person. Only an experienced kangaroo expert should attempt to make friends with this animal.

Is a kangaroo and a wallaby the same?

Kangaroos and wallabies are anatomically similar. The main difference is the wallaby’s much smaller size.

What is a baby kangaroo called?

A baby kangaroo is called a joey.

How high can a kangaroo jump?

One of the most remarkable facts about the kangaroo is that it can jump up to 10 feet high.

Kangaroo meat is supposed to taste a little like beef. The meat is almost always sourced from wild animals that are hunted as a means of population control. When one species starts over-breeding, licensed hunters are allowed to cull the extra population.