The largest Vole species in the UK!

Click through all of our Water Vole images in the gallery. 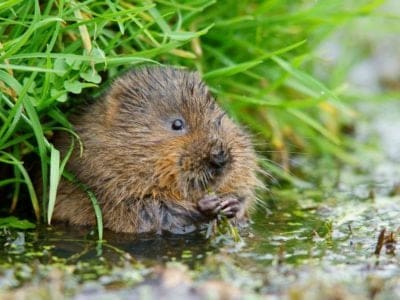 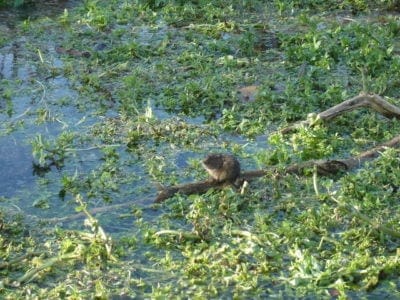 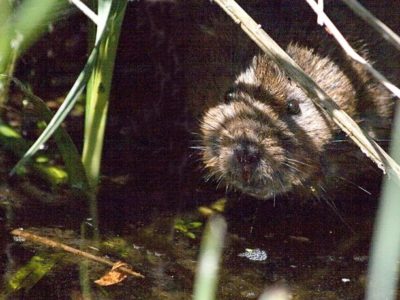 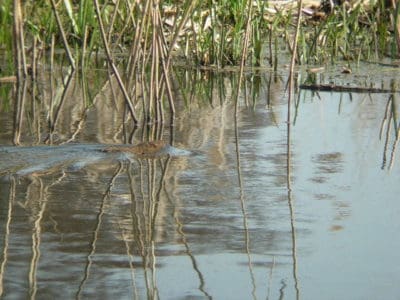 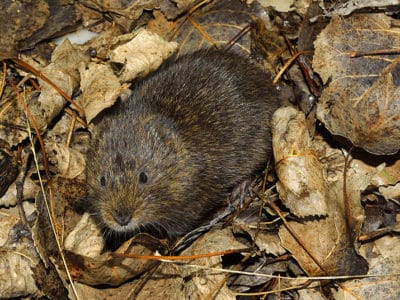 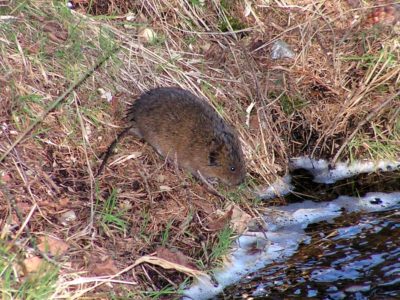 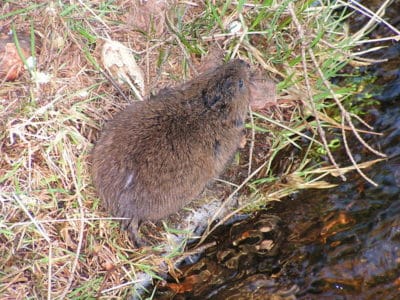 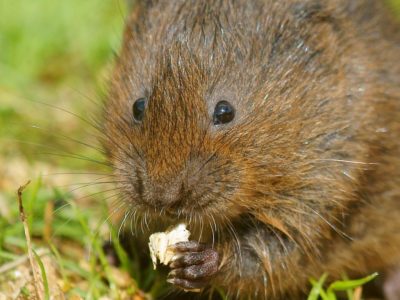 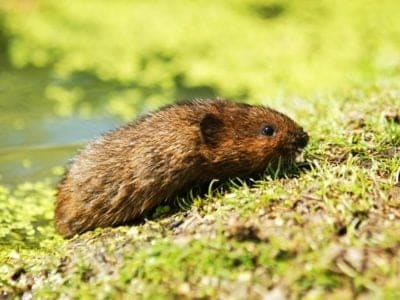 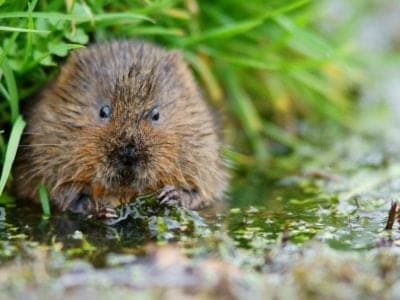 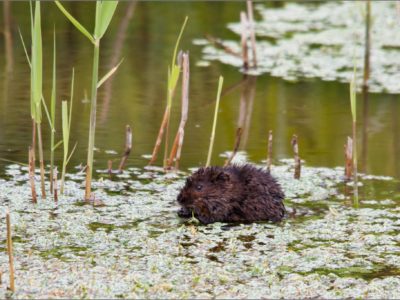 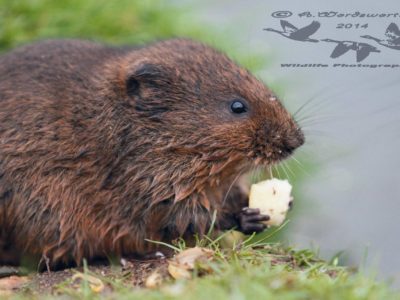 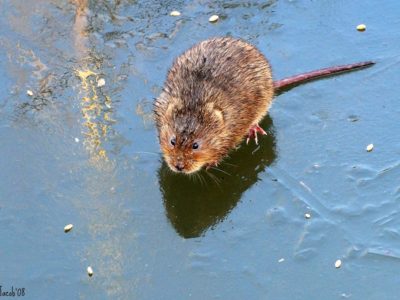 View all of the Water Vole images!

The Water Vole is a small species of semi-aquatic rodent that is found along the riverbanks throughout the UK and Europe. They are similar in appearance to Mice and Rats but have a number of distinctive differences including a flatter snout and a shorter tail. Also known as the European Water Vole, and incorrectly the Water Rat, the Water Vole first became properly famous as the character of Ratty from Kenneth Grahame’s book, The Wind in the Willows, in the early 1900s. Water Voles are also commonly confused with the Brown Rat as they share very similar habitats along the riverbanks, have almost identical colouration, and both are adept swimmers. The Water Vole is one of six species of Vole found in the UK today.

The Water Vole is a small sized rodent with a dark brown coat of fur, that has a number of black hairs scattered across it, and a lighter, greyish underside. The head and snout of the Water Vole are flatter and more rounded than those of other rodents, and its ears are generally much smaller. They have a short tail, which is covered in a number of small hairs, and long claws on each of their feet which are primarily used for excavating burrows. The skin between the toes of the Water Vole is slightly webbed, making it easier for this small rodent to swim through the water. Males tend to be slightly larger than females but both are similar in appearance. The Water Vole is the largest Vole species in the UK and one of the largest species of Vole in the world.

The Water Vole is found throughout the UK and Europe, with its range even extending into parts of Russia and populations are also found in certain parts of Canada and North America. However, they do not appear to survive well in more extreme environments such as the highlands of northern Scotland, or the hotter regions of southern France. Water Voles live along the banks of slow-moving rivers, streams and canals and can also be found nesting in the banks of lakes and marshes. They spend much of their time in their own burrow, the entrance to which is often on or just below the water’s surface to protect them from predators. A female Water Vole’s burrow can extend for around 70 meters along the riverbank, while the male’s can be more than double this in length and often occupies the territories of a number of females.

Water Voles are aquatic rodents that lead a diurnal lifestyle, meaning that they are most active during the day when they leave the safety of their burrow in search of food. Swimming right into the water, Water Voles gather aquatic plants which they often take back to the surface to consume. Their burrows are complex systems in the soft riverbanks, that often include a number of chambers, each with its own purpose. Areas for sleeping, eating and nesting are created along with latrines on the outskirts of their territory, where faeces are deposited to mark the individual Water Vole’s patch. Once weaned at about a month old, the young Water Voles leave their mother’s burrow in search of somewhere to develop of their own. This can be quite hard though for populations that are contained in isolated bodies of water, and conflicts over the few available plots are not uncommon.

Water Voles tend to have a fairly long breeding season, which usually lasts from March to September, sometimes even into October, depending on the climate. Voles mate for life.

The female Water Vole constructs a nest from rushes and dried grass inside her burrow, giving birth to a litter of between 3 and 8 young after a gestation period that lasts for approximately three weeks. At birth, the baby Water Voles are extremely vulnerable weighing just 4 or 5 grammes and are completely hairless. They do however develop very quickly and have a full coat of fur by the end of their fifth day, and are able to see after about a week, They are fully weaned a couple of weeks later, when they leave the burrow they were born in and start the hunt for their own. Females tend to have a few litters per year, with their lifespan ranging between 5 months and two years in the wild.

Water Voles have a predominantly vegetarian diet, feeding on grasses along the riverbanks and aquatic plants that grow in the slow-moving waters. The diet of Water Voles does vary depending on their location and what is available, but these adaptable animals have been recorded to feed on 227 different species of plant, all of which are in close proximity to their burrow. One of the Water Voles most characteristic traits amongst rodents, is their ability to dive right into the water, a behaviour which is thought to help protect them from the many predators that they share their habitats with. It also means that there is less competition for food from neighbouring rodents like the Brown Rat.

Due to its small size and the fact that it lives both on land and in the water, Water Voles are prey to numerous predators wherever they appear to live. Mammals including Mink, Weasels, Foxes and domestic Cats, along with Adders are the most common predators of the Water Vole on dry land, with Owls and other Birds Of Prey hunting them from the air, and large Fish species such as Pike, being their most common aquatic predator. Their vast reduction in numbers in recent years however is not just caused by this high level of predation, as the loss of much of their natural habitats has had a much more drastic effect. Water Voles habitats in the UK especially, are today considered to be protected areas as it is the loss of these that has been the primary cause for their demise.

Despite their almost solely herbivorous diet, Water Voles are also known to feed on Insects and small aquatic animals such as Fish (particularly dead ones as they are easier to catch) when their preferred foods are in short supply. Even though Water Voles have a very high rate of reproduction, it is thought that around 70% of them do not make it through the winter, as food supplies dwindle and sometimes run out, meaning that the Water Voles find it very difficult to retain enough fat to keep them warm. The latrines that they use on the edges of their territories are almost fully exposed during the summer months as these indicate where a female might be and whether or not she is ready to mate.

The Water Vole was first properly put into the public eye as one of the main characters of the 1908 Wind In The Willows novel, was a Water Vole called Ratty. Even though it has made more people aware of these secretive little rodents, it has also led to some confusion over their classification as they are often incorrectly referred to as Water Rats, to which they are only distantly related. In the United Kingdom, the Water Vole is protected by the fact that its habitat is now conserved, hopefully meaning that populations will soon begin to properly recover again, with other countries looking to follow similar steps to protect their own native populations.

Today, the Water Vole is listed as an animal that is of Least Concern of becoming extinct in the wild in the immediate future, as despite drastic habitat loss, Water Vole populations are still widespread and sustainable in much of their native regions. In the UK, under the Wildlife and Countryside Act 1981, it is a criminal offence to damage or obstruct access to any area that Water Voles use for shelter or protection. This protection however, does not extend to the actual Water Vole itself, but is more a step to protect the declining suitable habitats that remain, as it is the loss of these that has led to such a drastic drop in population numbers.

What Kingdom do Water Voles belong to?

What phylum to Water Voles belong to?

What family do Water Voles belong to?

What order do Water Voles belong to?

What type of covering do Water Voles have?

Water Voles are covered in Fur.

What genus do Water Voles belong to?

Where do Water Voles live?

In what type of habitat do Water Voles live?

Water Voles live on the banks of slow-moving water.

What are some predators of Water Voles?

Predators of Water Voles include weasels, owls, and pike.

What are some distinguishing features of Water Voles?

How many babies do Water Voles have?

The average number of babies a Water Vole has is 6.

What is an interesting fact about Water Voles?

The Water Vole is the largest Vole species in the UK!

What is the scientific name for the Water Vole?

The scientific name for the Water Vole is Arvicola amphibius.

What is the lifespan of a Water Vole?

How many species of Water Vole are there?

There is 1 species of Water Vole.

What is the biggest threat to the Water Vole?

The biggest threat to the Water Vole is habitat loss.

What is another name for the Water Vole?

The Water Vole is also called the European water vole or water rat.