Written by Hailey Pruett
Updated: November 1, 2022
© Dan Olsen/Shutterstock.com
Share this post on:
More Great Content:
The 10 Largest Frogs In The World
5 Animals That Go Through Metamorphosis &…
What Do Axolotls Eat?
Axolotl Colors: The 10 Types of Axolotl…
Axolotl as a Pet: The Ultimate Guide…
Axolotl Lifespan: How Long Do They Live?

While basically all frogs are semi-aquatic to some degree, some species spend nearly all of their lives underwater! Though they are quite rare, there are several notable varieties of nearly fully aquatic frogs. Most types of water frogs are part of the Pipidae family, which are native to warm, humid areas of South America as well as southern Africa. Let’s take an in-depth look at water frogs below!

Named for the short claws on their muscular hind feet, the African clawed frog almost never leaves the water!

Interestingly, these water frogs are tongueless and toothless. They rely on a hyobranchial pump to pull food down their throats after shoving whatever they can find to eat into their mouths with their hands. Additionally, they are fully carnivorous and will eat just about anything small and weak enough that crosses their path. They even sometimes participate in cannibalism, often feeding on their own and other frogs’ eggs, tadpoles, and even froglets.

Their extreme indifference towards their food also extends to their–ahem–reproductive habits. Male African clawed frogs aren’t particularly selective when it comes to their partners, often grabbing onto other males or even frogs of entirely different species!

African clawed frogs have also been quite popular in the pet trade for decades. They are fairly low-maintenance pets, able to live for up to 20 years or more in optimal conditions.

Most people know the Surinam toad for its bizarre method of reproduction. There are actually several species of Surinam toads within the Pipa genus, but the common Surinam toad (also sometimes known as the star-fingered toad) is the most popular. These unusually flat, beady-eyed frogs live throughout Central and South America in subtropical and tropical swamps and forests.

But back to the Surinam toad’s claim to fame–the way it gives birth. When a male finds a willing female, she will release her eggs for him to fertilize. Once the male fertilizes them with his sperm, he will push them onto the female’s back so they stick to her skin. Over time, she grows a layer of skin over the eggs, essentially incubating them on her back! When it’s time for the eggs to hatch, they will emerge from the eggs and burst out of the skin on the female’s back.

Interestingly, this process doesn’t harm the female in any way. After her clutch hatches and emerges from her back, she’ll begin to regenerate the skin. This way, when the next mating season comes around, she can incubate a new clutch of little Surinam toadlets.

Surinam toads lead pretty solitary, uneventful lives otherwise. They feed on various aquatic invertebrates, like worms and small crustaceans, as well as small bony fish. Interestingly, both males and females of the species have sensory organs in their fingers. They use these organs to search for food!

Unfortunately, Surinam toads aren’t very popular types of aquatic frogs in the pet trade. They require lots of privacy, mainly in the form of tank decorations and plants. Additionally, they prefer low-light conditions, making them difficult to observe. The water in their enclosures also has to be changed often, as the toads secrete a lot of ammonia from their skin.

Often mistaken for African clawed frogs, western clawed frogs (also known as tropical clawed frogs) are yet another member of the aquatic Pipidae family. They are perhaps most notable for being very useful in genetic studies and genome sequencing due to their unusual genetic makeup. Other benefits of using them in research are that they are hardy, breed easily and quickly in captivity, and take up very little space.

Small in size at only around 1.5 to 2 inches, these little water frogs live throughout West Africa’s rainforests. Their front legs are small and weak, but their hind legs are very muscular for swimming. They prefer hiding in warm, moist swamps, marshes, and river and creek beds. The species is mostly carnivorous, usually feeding on insects like worms, grubs, and sometimes even other frogs’ tadpoles.

We revisit the Pipidae family once more to feature the Zaire dwarf clawed frog, also sometimes known as the Congo dwarf clawed frog. They are small yet hardy water frogs that live throughout central and western Africa in slow-moving rivers and creeks. On average, they are around 1.5 to 2 inches long and have long, strong, back legs with short, stubby front limbs. True to their name, the frog’s hind feet have short claws, which they use for self-defense.

Like other clawed frogs, the Zaire dwarf is common in the pet trade for its decently long lifespan and resilient, docile nature. They can’t be handled much, as like most aquatic frogs, their skin dries out very quickly. Still, they can be a delight to observe in captivity, as they are strong swimmers and naturally curious and active.

Amusingly, the males tend to look as if they have enlarged heads due to their enlarged external eardrum, or tympanum.

We cap off this list with the green puddle frog, a member of the Dicroglossidae family. They are also sometimes referred to as Indonesian floating frogs. Like other aquatic anurans, they spend almost their entire lives in water, only briefly coming to the surface for air. Native to Asian countries like China, India, Thailand, and Cambodia, green puddle frogs mostly reside in shallow subtropical swamps, marshes, and slow-moving rivers and creeks.

This type of aquatic frog, like the others on this list, are also very small at only around 1.5 inches. They make good pets, as they are hardy and active and not particularly picky eaters. Because of their peaceful nature, it is common for pet owners to house them alongside fish and other water frogs. As carnivores, green puddle frogs primarily feed on small insects like crickets, worms, and flies.

Though they are docile and inexpensive to care for, green puddle frogs are very shy and reserved. They require plenty of privacy in the form of dense plant cover and rocks in captivity. Like other aquatic frogs, their skin is sensitive and dries out quickly, so they should not be handled directly.

6 Adorable Puppies in Dallas to Adopt for Christmas 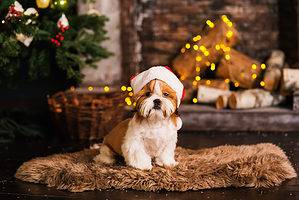