9 Smallest Reptiles in the World

Reptiles are a diverse group of animals with more than 10,000 different species in the world. These include animals like snakes, lizards, and turtles. With so many species of reptiles, you can find them in a variety of shapes, sizes, and colors. In this article, you will learn about 10 of the smallest reptiles in the world.

Reptiles are well adapted to live in the variety of habitats the earth has to offer. Reptiles like alligators and sea turtles can weigh more than 1,000 lbs, but in this article, you will learn about 9 of the smallest reptiles in the world. Some are even small enough to sit on your fingertip!

The speckled cape tortoise is the smallest tortoise species in the world and grows to be only 2.4 to 3.1 inches. They are also extremely light and only weigh around 3.4 to 5.8 oz ( 95 to 165 grams). This small species is also known as the speckled padloper, or speckled tortoise, and two subspecies exist.

Speckled cape tortoises are now endangered due to habitat destruction and the pet trade. Being so small they are often kept as pets, but it is illegal to capture them in the wild. They are herbivores and feed on plants like carrots, fruits, and calcium.

Native to Ecuador, the variegated snail eater is one of the smallest snakes in the world. They usually grow between 3.4 to 3.5 inches. (8.6 to 12.7 cm), and have a slender body. As its name suggests, this species feeds on snails, but also slugs. They are not harmful to humans and are even docile when handled.

Variegated snail eaters have black and brown scales with a mottled pattern. Large circular eyes are on their head, and they have a blunt faces. Forests are the habitats they live in, and being so small they are preyed on by a variety of other larger animals. It is thought that they have a healthy population in their range, but their secretive lifestyle and small size make them hard to study in the wild.

Looking similar to an earthworm, the Brahiminy blind snake is one of the smallest snakes in the world. They grow between 4.4 to 6.5 inches (11.2 to 16.5 cm) and have a gray, purple, or dark coloring with smooth, shiny scales. It is very easy to confuse this species with an earthworm since they have a small size, extremely tiny eyes, and are fossorial, meaning that they burrow into the soil.

This small snake species is native to southeast Asia. They spend a majority of their life buried underground. Under logs, stones, leaves, and other dark moist areas are where they prefer to live. Termites, eggs, ants, and larvae are what this small snake preys on. Some even see them as pests since they can find their way into basements and homes.

The bright coloring of the male electric blue gecko is what gives this species its name, and they are also one of the smallest reptiles in the world. Electric blue geckos average between 2 ⅔ to 3 inches in size. Females and young geckos are colored brown and lack the vibrant coloring of mature males. The blue coloring is used by males to attract a mate, and show they are a gecko old enough to breed.

Electric blue geckos are native to Tanzania and live in the forest. Because of their coloring and size, they are loved species kept by some in the pet trade. Being so small their diet consists of small insects like fruit flies, moths, beetles, and crickets. In captivity, they have a lifespan between 10 to 15 years.

Cape dwarf geckos are native to Africa and are some of the smallest lizards in the world. Being so small they can make their way into homes, and they are common in residential areas. On average they measure between 1.5 to 1.6 inches (39 to 43 mm)long. Gray or brown coloring covers their body, as well as small dark specks.  They have a long tail with a sticky pad on the tips tip to help them climb.

Cape dwarf geckos are sometimes kept as pets but are shy because of their extremely small size. They do not live long, and most only live for around 4 years. Insects make up a majority of this species’ diet, and they eat similar bugs to other small geckos. When shedding their skin they will eat the skin flakes that fall off.

Like other geckos, this lizard has the ability to lose its tail when it is in danger. Cape dwarf geckos usually live near humans since they will use structures as shelters.

Barbados thread snakes are the smallest snake species in the world and they live on the island of Barbados in the Caribbean. This snake only grows to be around 4.1 inches long (10.4 cm), and belongs to the family of Leptotypholops. This species ranges in color from pink to dark brown. It has smooth and moist-looking scales, and they spend most of their life underground. This snake only lives in forests and has an average weight of .02 ounces (.6 grams).

It is easy to confuse this snake with other blind snake species, as they look extremely similar. Their mouths are extremely small and are not able to open that wide. Because of that, they are only able to eat eggs and larvae. Barbados thread snakes are small enough to fit in the palm of your hand, and they are harmless to humans. This species was previously identified as another blind snake species and was officially discovered in 2008.

The virgin island’s dwarf gecko is the smallest gecko species in the world, and they are also an endangered species. Virgin islands dwarf geckos only grow to be around 18 mm, and they are small enough to comfortably sit on a dime. This species is native to the British Virgin Islands of Tortola, Moskito, and Virgin Gorda. Hiding in rocks and under other natural debris is what this species spends most of its time doing.

Their body is also well adept at maintaining proper moisture and living in dry areas. Along with being extremely small they are light, and only weigh 0.0053 oz.  Their bodies are small and brown and covered in a mottled pattern. They have a sharp-pointed head, and like other geckos, they have the ability to lose and regenerate their tails.

The small size of this species is what they use to survive and hide from predators, but is also why they are such a vulnerable species. Virgin island dwarf geckos are one of the rarest lizards and are also the most difficult to study because of their small size and secretive nature.

Like other chameleons, this species feeds on insects, but only the smaller species. They are active during the day and will sleep on the forest floor at night. Being so small they cannot defend themselves from predators and must rely on not being seen to survive. If spotted or attacked they play dead, and fall to the ground to replicate a falling leaf. In captivity, they live for around 10 years, but it is not known how long they live in the wild.

Brookesia nana is currently the smallest lizard, and the smallest reptile in the world, and is small enough to fit on the tip of your fingertip. This species is also called the nano-chameleon and was discovered in 2021. They have the body shape and eyes of a regular chameleon but are around 0.87 to 1.1 inches (22 to 29 mm) small. Unlike other chameleons, they are not able to change colors and have a tannish color.

Brokesia nana spends a majority of their time on the floor in forests, They are native to northern Madagascar, and they are an endangered species. Habitat loss and deforestation is the main reason Brookesia nana is going extinct, but they are also easily preyed upon by animals because of their size. Brookesia nana is thought to be so small to be able to survive in the shrinking rainforest habitat in Madagascar. 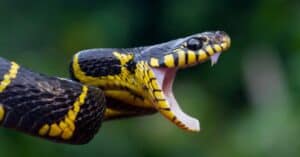