The American bison is the United States’ first national mammal! Its conservation is considered “one of the greatest conservation success stories of all time,” as specialists managed to grow the bison population from 635 to approximately 20,500 individuals!

How much do we know about these animals? Are they friendly creatures? What do they eat? How much do they poop? Can you believe that bison poop, and bovine poop in general, has been used as a heat source for hundreds of years? Check out this article to find out more!

The bison is North America’s largest mammal! Their history dates back as early as the 19th century when the territories between Alaska and Mexico hosted 60 million bison individuals! Over the years, though, their population had steadily declined. In 1889, only 635 bison were left.

But today, there are approximately 20,500 bison in the wild, thanks to human efforts to protect this species.

Their unique characteristic is that they have two large horns. Besides this, bison are very fast animals, reaching 40 miles per hour.

Bison are lazy, sociable mammals living in North America and Europe. A small bison herd lives in Russia. It’s worth mentioning that they’re sociable among each other, and humans are advised not to get too close to bison.

What do bison eat, and what eats them?

Bison are herbivorous animals. Their primary food source is grass, but they also feed on shrubs and tree vegetation. A bison’s diet must equal 1.6 of their body mass per day, approximately 24 pounds of grass. Otherwise, it will be malnourished.

The main bison predators are cougars, wolves, bears, and humans. Native tribes greatly “contributed” to the fact that the bison population declined rapidly centuries ago because they used them as a food source. Moreover, technological development and habitat loss further endanger this species.

What is bison poop called?

Like other bovine animals’ droppings, bison’s poop is greenish to blackish but becomes darker when it dries out. Bison droppings are round and fibrous, thanks to their vegetation-rich diet.

A bison can produce 10-12 quarts of poop and gallons of urine daily.

Horses poop 4–12 times a day. Like bison poop, horse manure is green, brown, or black. On the other hand, their form differs from that of a bison. Horse poop consists of moist balls. They may contain shed cells, water, sand, or grit.

Goat poop consists of hard, dark brown pellets. If seen from a distance, goat droppings may look green or black. They are oval-shaped. A goat poops 3-6 times a day.

What does poop tell us about bison health?

Just like human poop tells a lot about a human’s digestive system health, bison droppings contain much information about the animal’s health. For example, if the poop is very loose and gray or misty-colored, the bison must be checked by a vet because it may be sick.

Blood in their dung may indicate that the animal has coccidiosis, while an intestinal tissue discharge flags salmonella.

Moreover, bovine droppings can tell a lot about the animal’s diet, whether it’s good or needs to be adjusted. If the poop doesn’t pile, the diet needs to be changed.

Too thick droppings may indicate that the bison’s diet lacks protein. If the “nik-nik” folds together, the bison gets too much protein.

Identifying the texture, form, and color of healthy bovine poop may save the life of a bison!

Bison poop, and bovine poop in general, have been useful as early as centuries ago when various people used it for cooking heat and warming up. How? They collected the dried “buffalo chips” and burned them.

Nowadays, bison poop is often used as an agricultural fertilizer. Many countries use bison poop to produce fuel. It is also useful in generating biogas (a mixture of gasses consisting of carbon dioxide, hydrogen sulfide, and methane, among others) that are used to produce electricity and heat.

The Massai people, a Nilotic ethnic group, living in northern Tanzania and central and southern Kenya, use bovine dung to repel mosquitoes by burning it. Another interesting use of bovine poop is to line the walls of rustic houses.

Bison can get Bovine Viral Diarrhea from other bovine animals, and, in turn, they can spread it to other animals. This disease also affects elk, but it’s more harmful to cattle and bison, causing reproductive loss, slow growth, and even death. This disease is caused by a virus and can be of two types. Type 1 is less severe and causes fever, diarrhea, and poor appetite. Even if the animal gets well after being sick with bovine viral diarrhea, its immune system is weak, and the bison can get other diseases.

Fortunately, herds can be vaccinated against this disease. Bovine viral diarrhea does not affect people.

Is bison poop harmful to humans?

Bison poop isn’t usually harmful to humans, but, like with other animal droppings, it’s highly recommended to handle it with great care, as it may contain lots of bacteria and worms. People handling bison dung are advised to wear gloves and thoroughly wash their hands afterward. 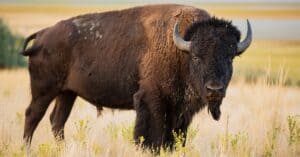