Ondrej Michalek/Shutterstock.com
Share this post on:
More Great Content:
Watch This Omnivorous Fish Hunt By Sharpshooting…
Banana Spiders in Alabama
The Top 10 Biggest Spiders in the…
10 Spiders in Indiana
Are Orb Weaver Spiders Poisonous or Dangerous?
The 6 Largest Spiders Found in Michigan

If you’re lucky enough to spot a camel spider in the deserts of Arizona, consider yourself fortunate. These creatures are fascinating but not actual spiders. Instead, they are a type of solifugid or solifuge. Also known as wind scorpions or sun spiders, camel spiders of Arizona are native to arid climates. However, they can be found in other desert regions as well.

A fun fact about camel spiders is that they run fast! They have long legs able to move their bodies up to 10 miles per hour, which is pretty impressive for such small animals. Camel spiders are also known for their large jaws, which they use to capture prey. Unfortunately, these jaws are so powerful that they can also pierce human skin.

Keep reading to discover more exciting facts about camel spiders and why they’re actually not spiders at all.

What are Camel spiders?

Though called a spider, a camel spider is a solifuge (solifugid). Two significant differences between spiders and solifuges are that spiders have venom and silk glands, but solifuges do not.

Without venom, the camel spider of Arizona is not poisonous but can give a painful bite if provoked. Plus, its reputation of being fast and aggressive has led to some tall tales about its size and behavior. So if you hear stories of camel spiders that are the size of your hand and dangerous to humans, they’re not true.

Let’s clear up another mistake people often make about camel spiders when counting their legs. At a glance, it looks like this desert arachnid has five pairs of legs or ten legs total. However, camel spiders only have eight legs. Or, more accurately, their leg-like appendages are called pedipalps. And one pair of those ten pedipalps is used for sensing, not moving. Therefore, we say that camel spiders have eight legs instead of ten.

These arachnids come in different colors, including brown, yellow, and red. They can grow to be about 6 inches long, but most are between 2-3 inches.

Camel spiders are sometimes called wind scorpions or sun spiders. The name camel spider originated from a myth that it crawls into the stomach of camels and eats it. Unfortunately, that’s another tall tale that isn’t true about these creatures.

However, this arachnid sometimes gets innocently confused with the scorpion. Yet camel spiders are pretty different than scorpions, which can be deadly to humans.

Where do Camel spiders live?

Camel spiders are native to the deserts of Arizona and can be found in other arid climates. These arachnids live in deserts all over the world, including the American Southwest, Africa, Arabia, and Australia.

The camel spider builds a home by digging a burrow in the ground. This burrow is where the spider will live and lay its eggs.

How do Camel spiders reproduce?

Camel spiders mate via copulation. Or the male will present a sperm-filled pouch to the female from his chelicerae. The female will then lay eggs in her burrow. Once the eggs hatch, the baby camel spiders (called spiderlings) immediately begin hunting for small insects.

Females give birth to approximately 50-100 baby spiders at a time. The eggs mature and hatch in about 3-4 weeks if they survive hungry predators. The Arizona predators that might feed on these eggs include wasps, ants, and beetles.

Do Camel spiders have teeth?

Camel spiders have large segmented jaws that they use to bite and capture prey. These jaws are mighty and can pierce human skin. While camel spiders don’t technically have teeth, their mouths have sharp spines. This helps them grip onto prey while eating.

A unique physical trait of this arachnid is its large chelicerae. These are the appendages that camel spiders use to capture and kill prey. They are also sometimes called pincers or fangs. The chelicerae of a camel spider can be up to one-third the length of its entire body. That’s pretty long for such a small creature!

What is a Camel Spider’s lifespan?

Camel spiders typically live about 1-2 years unless killed by predators. Common predators of camel spiders in Arizona are lizards, toads, bats, and birds.

These animals also don’t last long in severe heat. So to protect themselves, camel spiders will burrow underground to escape the high temperatures of the Arizona desert.

Can you keep Camel spiders as pets?

Camel spiders are not recommended as pets because they can be aggressive and bite. However, if you decide to keep one as a pet, handle them with caution and keep them away from small children and animals. Vital steps in keeping camel spiders as pets are highlighted below.

These spiders also require special care, such as a warm climate and dry habitat. You need to closely monitor their tank temperature and adjust it for lower temps at night. Consult with trustworthy arachnid resources for best practices. You’ll probably want the tank’s temperature set at 95 degrees F (35 C) during the day and lowered to 75-80 degrees F (24-26 C) at night.

Choose a tank size of at least 5 gallons, with a secure lid that allows good airflow through a material like mesh. To prepare a tank for your camel spiders to live, you’ll need to fill it up to 2 inches from the bottom with sand. Then, add some rocks or wood for hiding places.

One Pet Per Tank

Camel spiders are not social creatures and do not live well with other animals. Therefore, it’s best to keep them solo in the tank, or you run the risk of them killing and eating each other.

You’ll want to feed your pet camel spiders live insects every other day. Make sure to remove any uneaten food from the enclosure to prevent mold growth. You’ll also need to give this pet a water dish and fresh water daily.

Are Camel spiders dangerous to humans?

Camel spiders are not a danger to humans, but as we’ve already established, you don’t want to get bitten by one. Their bite is painful, causes a puncture wound, and the bite area might swell and redden temporarily.

If you get bitten, wash the area with soap and water and apply a cold compress to reduce swelling. Consult with your doctor for medical support if the bite site looks infected.

What is the difference between a camel spider and a scorpion?

In addition, camel spiders are smaller than scorpions, at only 2-6 inches long. On the other hand, scorpions can get quite large, with some species growing over 8 inches long.

Another difference is that camel spiders are not venomous, while scorpions are. If you get stung by a scorpion, you may develop serious health problems. Symptoms of a scorpion bite could include severe conditions like seizures and difficulty breathing or swallowing.

If you get bit by a camel spider, it will hurt and cause a puncture wound. However, it’s not life-threatening. Other symptoms might only occur if the injury gets infected or someone has a rare allergic reaction.

Camel spiders of Arizona are similar to spiders and scorpions but are also unique arachnids with their own fascinating qualities. They’re aggressive and bite hard but aren’t poisonous or life-threatening to humans. They’re fast movers but only have eight leg-like structures called pedipalps. They live in the desert but burrow in the ground to avoid hot desert temperatures. And they can be kept in captivity but only as solo pets in a temperature-controlled tank filled with sand.

To learn more about arachnids, check out our post about how many spiders are in the world. Also, consider visiting the Arizona-Sonora Desert Museum when in Arizona to discover more about camel spiders. This museum has a great exhibit on these amazing creatures. 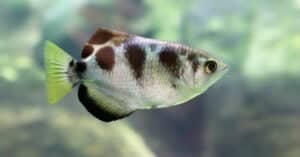 Watch This Omnivorous Fish Hunt By Sharpshooting Its Prey 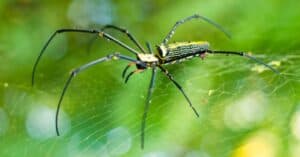 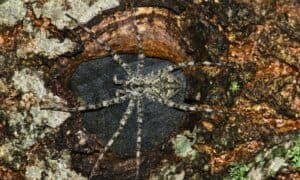 The 6 Largest Spiders Found in Michigan