Known to follow in a human's shadow to stay warm!

Click through all of our Camel Spider images in the gallery. 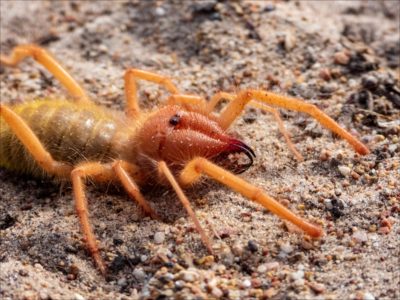 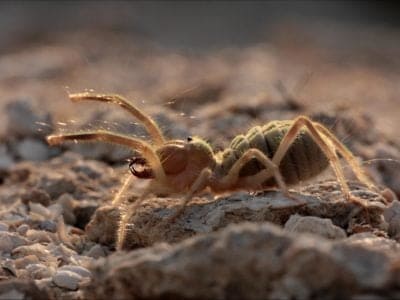 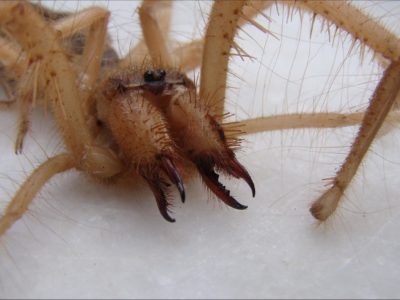 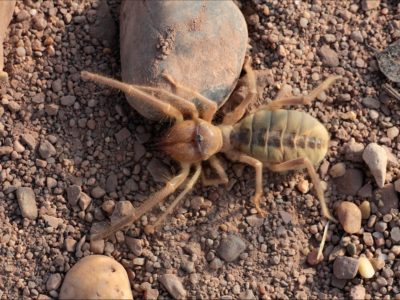 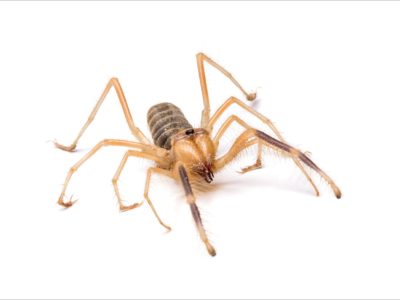 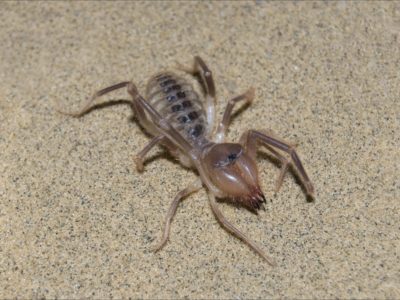 View all of the Camel Spider images!

Camel spiders can move as fast as 10 miles per hour!

The camel spider lives in the Middle East, Mexico, and the southwestern area of the United States. They live in dry climates like deserts and scrublands. This animal is a carnivore that eats rodents, small birds, insects, and lizards. The bite of this creature is very painful to humans.

The camel spider belongs to the Solpugidae family and the class Arachnida. This animal goes by a few other names including wind scorpion, sun spider, and the Egyptian Giant solpugid. Solpugid is the Latin word for ‘sun spider.’

This creature got its name based on the myth that it eats the insides of a camel’s stomach. This is not true. But the name has stuck with it despite the busted myth, making the name camel spider a bit misleading.

There are more than 1,000 species of this spider. Galeodes arab, Galeodes caspius, Galeodes granti, and Paragaleodes are just a few examples.

While it has eight legs, some people mistakenly think it has ten because camel spiders have two long pedipalps (a second pair of appendages) near their mouths. They use these to find and pull in their prey.

The size of this spider ranges from 3 to 6 inches long. It weighs about two ounces. If you put three golf tees on the ground end to end you would be looking at the length of a six-inch camel spider. Hold a tennis ball in your hand and you are holding something that’s about the same weight as a two-ounce camel spider. The camel spider is one of the biggest spiders in the world.

Camel spiders can move quickly through their desert or scrubland habitat. The fastest they can go is 10 mph – which, while not slow, is only about one fifth as fast as a rabbit. The next time you hop in the car, watch the speedometer as it moves up to 10 mph, this will give you a solid idea of how fast this animal moves!

Camel spiders are solitary except during mating season. They can also be aggressive if they feel threatened but are rarely seen by humans since they are mostly nocturnal.

Camel spiders live in the Middle East, southwestern United States, and Mexico. They live in hot, dry deserts and scrublands.

Camel spiders hide in crevices between rocks as well as under logs to keep cool when daytime temperatures reach their highest. They hunt at night when the temperatures are cooler.

Water is scarce in the desert, so camel spiders get most of the liquid they need to survive when they eat their prey.

These animals don’t migrate. They live in the desert or scrubland throughout their short lives.

What do camel spiders eat? These animals are carnivores. Some of their prey includes lizards, small birds, gerbils, beetles, snakes, and termites. This arachnid can even eat prey that is larger than itself. Like many other creatures, camel spiders will eat whatever prey is most plentiful in their environment.

Camel spiders can sense prey with their pedipalps and grab them with their jaws. They use their own digestive juices to turn their prey into a pulpy liquid that they can consume. Yuck!

Sometimes there’s not much food available for camel spiders in deserts and scrublands. So, these animals store fat in their bodies to nourish them during those times when they can’t find prey.

Camel spiders have a few predators including toads, scorpions, and bats. These three predators are nocturnal. So, they are active at the same time camel spiders are out hunting for prey.

A bat using echolocation can find a camel spider and swoop down to pick it up for a meal. A scorpion can overpower a camel spider and eat it. There are also some desert toads that are as large or larger than camel spiders, so they are also capable of capturing one of these spiders to eat.

One major threat to camel spiders is starvation. If they can’t find prey in the desert and aren’t able to store up any fat, they can die of starvation.

However, the official conservation status of camel spiders is least concern.

During breeding season, a male camel spider chases a female spider to mate with her. Once the mating has occurred, a female camel spider hunts for food, storing up as much fat in her body as she can. After an 11-day gestation period, she digs a burrow in the ground and lays from 50 to 250 eggs in it.

A female camel spider stays in the burrow with her eggs until they hatch. She doesn’t even leave the burrow to hunt for food, instead, she survives on stored fat. In some cases, if the female spider doesn’t store up enough fat to live, she will die in the burrow before her eggs hatch.

It takes three to four weeks for camel spider eggs to hatch. Once they do, the babies, also known as spiderlings, are able to hunt for small insects. As they grow larger, they can hunt for larger types of prey.

As you can guess, the spiderlings of a camel spider are very small when they are born so they’re vulnerable to a lot of predators. This is one of the reasons why a female has so many eggs. It improves the chances that at least some of the spiderlings will reach adulthood. A camel spider can live for up to one year.

These animals are active only at night and hide well during the day. As a result, the population of camel spiders is unknown.

However, they fall into the conservation category of least concern, according to the International Union for the Conservation of Nature (IUCN).

How big do camel spiders get?

The size of a camel spider ranges anywhere from three to six inches. But the biggest ones can get up to six inches long.

Why are they called camel spiders?

These creatures got their name due to the myth that claimed these spiders ate the insides of a camel’s stomach. This isn’t true. A camel spider is too small to subdue a large mammal like a camel. But the name stuck with it even though the myth has been debunked.

Where do camel spiders live?

Camel spiders live in dry, hot climates. This includes places in the Middle East, Mexico, and the southwestern United States. Think of a desert or scrubland and you’re picturing the habitat of a camel spider.

Are camel spiders dangerous to humans?

Camel spiders can sometimes be dangerous to humans. If a person finds a camel spider and moves up close to it, the spider is likely to feel threatened and afraid. If the person tries to capture or touch the spider, there’s a good chance the camel spider will bite the person. People who have been bitten by this spider have said that it’s very painful. If you look at a close-up photo of a camel spider’s jaws you will see why it would be painful! As a note, camel spiders don’t have venom. Of course, the wound from this bite would have to be treated to avoid an infection.

Like many other small animals, camel spiders would prefer to be left alone and not interact with humans. Unfortunately, there are many myths about them that have continued to circulate online. Some of the myths make camel spiders sound ferocious, but they are really very interesting creatures to read about.

So, if you ever see one, it’s best to move away and not try to harm or capture it. Fortunately, you can appreciate all of the amazing aspects of a camel spider without getting too close!

Camel Spiders are Carnivores, meaning they eat other animals.

What Kingdom do Camel Spiders belong to?

How fast is a Camel Spider?

A Camel Spider can travel at speeds of up to 10 miles per hour.