Canary vs Parakeet: What’s the Difference?

iStock.com/PaulGulea
Share this post on:
More Great Content:
From Predator to Prey - Watch a…
Discover 16 Extinct Types of Parrot
5 Extinct Owls
Top 9 Largest Eagles in the World
The Top 9 Largest Flying Birds in…
The Top 10 Fastest Birds in the…

While you may be able to tell an eagle apart from an owl, common pet birds like the canary and the parakeet can be a bit more difficult to tell apart. That’s why we created this canary vs parakeet guide to help you learn which is which!

Both the canary and the parakeet are two common small birds that were domesticated to keep as pets. However, they’re not the same. Keep reading to see exactly what sets these two species apart.

Comparing the Canary and the Parakeet

The key differences between the canary and the parakeet are their diet, lifespan, appearance, habitat, clutch size, and personality. The canary is a small, omnivorous bird found in a large range of habitats. While their natural color is yellow, they’ve been selectively bred to come in a diverse variety of solid colors. They live for nearly a decade and are known to be loner, quiet birds, though they can sometimes be playful. The parakeet, in comparison, is an herbivore hailing from the Australian outback, where they nest in hollow trees. It’s much more talkative than the canary and is very affectionate. This makes it easier to train and handle.

However, this is just a glance at what makes the canary different from the parakeet. Here are some of the 7 key differences explained.

While both the canary and the parakeet may eat fruits and berries, they have different preferences. The canary prefers this diet, and they may also include insects in their daily meals. The parakeet, however, is a strict herbivore that prefers seeds over fruits and vegetables.

In captivity, however, you can often feed these two similar food mixes. In fact, not only can they eat similar foods, but they can thrive off of them as well. This is because the mixed pellets that are fed to domesticated birds are designed to be preserved forms of all of their daily required nutrients.

The most common parakeet, the budgerigar, has a lifespan of only a few years, usually 3 to 6 at the most. However, some other species, like the Monk parakeet, can live as long as thirty years! The Monk parakeet, which can go by many names, is often banned from being a pet in some regions.

Canaries, on the other hand, can live for around a decade. Some species may live a little bit longer, up to 15 years, but others may have a lifespan as short as 5 years. The average domesticated canary tends to fall in the middle of this range, with a lifespan of 10 to 15 years.

One aspect that confuses people the most when comparing the canary to the parakeet is coloration. However, a close comparison will show that these birds actually sport very different plumages.

In the wild, the canary is known to be a striking shade of yellow – also known as “canary yellow”. However, selective breeding in captivity has led to canaries coming in a wide variety of colors, from the traditional yellow to oranges, reds, and even colors like black and white. The most significant difference between the canary and the parakeet when it comes to their feathers, however, is that canaries are not known to have any notable markings or crests.

The parakeet, on the other hand, often comes in a variety of colors and is usually bicolored. Some of the most popular combinations are green and yellow or blue and white. It may also sport a small crest.

When it comes to their wild habitat, the canary lives in far more diverse areas than the parakeet. Unlike the common parakeet, which is found only in the Australian outback, you can find the canary in a diverse range and several habitats ranging from dense and rich forests to sand dunes.

Most people don’t think of birds having diverse personalities. However, both the canary and the parakeet have unique personalities that help set them apart.

The canary is a sweet and playful bird, but it is also quite a loner and not particularly fond of cuddling its owners. The parakeet, on the other hand, is actually very loving and requires regular affection from its owners.

There’s a common belief that all birds are loud, especially when kept as pets. However, the differences in noise levels between the canary and thr parakeet go to show that there’s more than meets the eyes with the noise of different birds. Canaries tend to be quiet, especially as far as birds go, while the parakeets are known for being loud.

If you’re looking to breed either the canary or the parakeet, you may find it interesting to learn that another difference is the size of their clutches. A clutch is the total number of eggs a bird will lay in one breeding season.

The canary tends to lay smaller clutches, around three or four eggs that hatch in about two weeks. The common parakeet (remember, this is the Budgerigar) goes beyond this number, with clutch sizes starting at four eggs and getting as large as six eggs.

If you were to look at the Monk parakeet, however, their clutches can be as large are 12 eggs!

The canary and the parakeet are two completely different species of birds. The canary is a bit more of a loner with lower noise levels and a solid color plumage. They also tend to lay smaller clutches and live naturally in a diverse range of areas. The common parakeet, however, is originally found in the Australian outback and lays larger clutches. They’re far more affectionate than the canary and sport a bicolor plumage with a crest.

For beginners, the parakeet (budgie) is the best choice. They’re friendlier and easier to train, all while remaining a low-maintenance pet.

I'm a content writer with almost five years of experience. I recently graduated from Wingate University with a Bachelor of Arts in English and a double minor in biology and professional and technical writing. The American kestrel is my favorite animal, but I also like sharks and alligators. In my free time, I like to write creative fiction, watch documentaries, and explore nature. 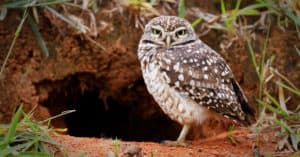