Copperheads in Nebraska: Where They Live and How Often They Bite

Despite their unwillingness to be seen by humans and their choice to live solitary lives except when they mate, it is really hard not to come across one in many American states. The major reason for this is how much range these snakes have. If you’ve ever wondered about copperheads in Nebraska, keep reading. This article covers copperheads in the state, where they live and how often they bite.

What Copperhead Species is Found in Nebraska?

The eastern copperhead is the only copperhead species found in Nebraska. These snakes are pit vipers from the Viperidae family and are known for their painful bites, hemotoxic venom, and pit organs.

Eastern copperheads are venomous stalk and ambush hunters. Due to their pit organs, they have infrared vision, which helps them hunt better than snakes that rely on their tongues and Jacobson’s organs. This doesn’t mean that pit vipers are stronger than other snakes, but it does mean that you wouldn’t want to get hunted by one at night.

As babies, however, these snakes have a different approach to hunting. Small copperheads look just like their parents and are just as venomous. However, their tail tips are colored red, yellow, or neon. These bright colors attract the caterpillars, grubs, and toads they feed on. When their prey come close enough, they attack.

How To Identify Eastern Copperheads

Eastern copperheads aren’t long snakes. They measure from 20 to 37 inches (1.7-3.1 ft) long and weigh around 3.2 to 11.2 ounces (0.2 to 0.7 pounds) as adults. As their name implies, these snakes have copper or orange-red colored heads, which are triangular and are fitted with their slit pupils.

Their bodies are easy to identify, as they have pale brown to pinkish-brown dorsal and ventral scales marked by hourglass patterns colored copper to reddish-brown.

Where Are Copperheads Found in Nebraska?

In Nebraska, copperheads are commonly found in Richardson County and the southern parts of Gage County. These counties have thick hills and forest woodlands, which are a favorite of copperheads. Copperheads are also found in Missouri River bluffs. These snakes like to hide in barns, abandoned buildings, large rocks, and even in tall grassy areas, so it is best to avoid places like these after dark.

How Often Do Copperheads in Nebraska Bite?

In the USA, copperhead snakes bite more people than any other snakes. However, snake bites are generally low in Nebraska. Although there are no official statistics, there are no public records of any snake deaths in the state. This is not to say that there were no instances or that Nebraska’s copperhead snakes pose less danger. It is important to always be alert if you’re walking through a snake-prone area.

Despite giving extremely painful bites, these snakes do not have a heavily toxic venom. This doesn’t mean that they aren’t dangerous- they are. About 0.01% of their bites are fatal, and while this figure is thankfully low, people still lose lives.

Copperheads have hemotoxic venom, which attacks their victim’s blood cells and tissue. These snakes use their venom to break down their prey’s tissue as they swallow them, making it possible to digest them faster. Human victims often experience swelling, damage to tissue in the affected area, and severe nausea.

What To Do If You Come Across A Copperhead In Nebraska

If you come across a copperhead or any other snake in Nebraska, leave it alone. Step away from the snake as quietly as you can. Most snakes do not like to be around humans and will gladly leave you alone if you leave them alone. Most snake bites occur in cases where humans disturb snakes accidentally or intentionally.

Remember that many snakes do not hesitate to bite or strike when they feel threatened. You should take this advice even if it is a non-venomous snake because many nonvenomous snakes are constrictors, musk-sprayers, and dry-biters. A snake’s venom isn’t the only thing you should worry about.

A copperhead bite (or any other snake bite) is an emergency as it could potentially be life-threatening. Envenomation and wound infections are just some of the dangers of a snake bite. Consequently, you should treat the situation very seriously.

First, get away from the snake and get a mobile phone. Walking, not running, while doing this is important because any movement can help the venom circulate. If you can get to someone faster than you can get to your mobile phone, head in that direction.

Once you have a phone, call the Nebraska Poison Control center at 1-800-222-1222. This free resource is available 24/7. The poison control center will prepare treatments and sort out how to get them to you. While you wait, sit still and stay calm. Do not attempt any first aid or try to suck out the blood from the venom. This could get snake venom in your mouth even after you spit, and it is also unlikely that you will suck everything out.

What Are The 4 Venomous Snakes In Nebraska?

What Is The Most Venomous Snake In Nebraska?

The most venomous snake in Nebraska is the timber rattlesnake. They have a more toxic venom than copperheads, as well as a higher death rate.

Do Water Moccasins Live In Nebraska?

Water moccasins, also called cottonmouths, do not live in Nebraska. However, Nebraska has a water snake of its own. The Northern Water Snake (Nerodia sipedon) is a nonvenomous snake that is more widespread than the copperhead in Nebraska. They might look like cottonmouths but aren’t venomous and shouldn’t be killed. 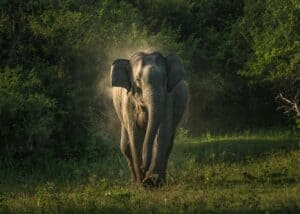