There are more than 3,000 snakes on our planet, meaning they are found almost everywhere. In forests, swamps, grasslands, bodies of water, trees, deserts, and maybe even in your backyard, a snake lurks, and you might not even know. Snakes also come in different sizes and may have different behaviors, but on the surface, they all look like each other, minus the size and color.

Although snakes are a common sight, especially for adventurers, animal lovers, snake enthusiasts, or anyone living in a snake-infested area, some snake species are rarely seen and live in mysterious ways. And here, we introduce you to the hideous Rainbow Snakes.

Rare, elusive, and mysterious are just three things you can describe as a rainbow snake. These non-venomous aquatic snakes prefer to live in concealment within underwater vegetation. They are considered rare to see because their elusiveness makes it difficult for even herpetologists to see them up close.

Although there is little known information regarding rainbow snakes’ ecology and way of living, we see that they grow in large sizes. But, are there any larger specimens of this rare and hidden snake? Today, we’re going to talk about the largest rainbow snake ever found. We will also talk about its diet, habitat, behavior, and any other unique features that this mysterious snake has.

What are rainbow snakes?

Rainbow snakes are solitary, non-venomous, and highly aquatic snakes found in the southeastern United States. Adult rainbow snakes are relatively large and often thick-bodied. It isn’t called a rainbow snake for nothing, as it has a beautifully-colored body, a bluish-black back, and three red stripes running lengthwise. The snake has a red or pink underside with two to three rows of perfectly-blended black spots, while a yellow tint on its head and sides completes its “rainbow” look. It has a shiny, iridescent look that makes many herpetologists and snake lovers want to look at it.

Although they grow into large sizes, rainbow snakes are primarily defenseless and docile creatures that don’t bite in defense. If approached or cornered by another animal or human, they would peacefully crawl away slowly. Despite this calm behavior, they can also use their harmless tails to press against their attackers and release a foul-smelling musk from their two glands.

Female rainbow snakes are larger than males, reaching a length of 66 inches, whereas males only reach an average length of 42 inches. They also have shorter bodies but longer tails than females. They also have a strange sexual dimorphism like other snake species.

Rainbow snakes breed in late spring or early summer as females will construct a nest in loose soil, sand, or debris and will stay with the eggs to protect them until they hatch between September and October. One clutch may contain 20 eggs, but a large-sized female can lay up to a total of 50 eggs. Young rainbow snakes are independent at birth and will become reproductively mature as they reach 2 or 3 years of age.

How big is the largest rainbow snake ever found?

Why are rainbow snakes considered “elusive?”

As mentioned earlier, rainbow snakes are rarely seen due to their cryptic and mysterious habitations. They are highly aquatic snakes that prefer to spend most of their lives hidden in aquatic vegetation and debris. Unlike other snake species, they rarely bask out of the water and will choose to stay where they are for a long time or even for the rest of their lives.

There are very few rainbow snakes in captivity, and the chances of seeing one in the wild may be little to zero. They are so elusive that even naturalists and herpetologists may not fully understand their ecology, way of living, or behavior. They mostly thrive in rivers, wetlands, forests, brackish waters, freshwater, lakes, marshes, and even some in the mountains.

Although they are considered highly aquatic snakes, sightings of rainbow snakes always happen in places where they are far from water. Occasionally, they are said to be observed crossing roads during the night and especially during or after heavy rainfall. This suggests that because rainbow snakes are primarily nocturnal, they may move overland at night because they are most active at those times.

What do rainbow snakes eat?

Do rainbow snakes have predators?

Despite their huge size, rainbow snakes are susceptible to various predators, including raccoons, Virginia opossums, eastern indigo snakes, and redtail hawks. As they are defenseless and would prefer to crawl away in the presence of a potential threat or a predator, they would be an easy meal for these animals.

Are there other rainbow-colored snakes?

The rainbow snake isn’t the only rainbow-colored snake you might have the chance to encounter. Out of the 3,000 species of snakes currently present, several numbers belong to snakes with vividly colored bodies and are considered beautiful.

Coming from a genus of non-venomous snakes, the rainbow boa is another beautifully-colored snake native to Central and South America. It is non-venomous and has the same behavior as the rainbow snake. Their color usually varies from brown or reddish-brown with black stripes and large black rings down their backs. Their scales have attractive holographic sheens caused by structural coloration, meaning that their skin is refracting light, creating a rainbow-colored effect.

A rainbow-colored snake species endemic to Asia, the rainbow water snake, isn’t like any other rainbow-colored snake, as they are mildly venomous. Their color is usually medium to greenish-brown, with their heads and necks appearing more olive-colored than the rest of their bodies.

Also known as the “sunbeam snakes,” the Xenopeltis is a non-venomous unicolor snake species native to Southeast Asia and some parts of Indonesia. They have existed for a long time, making them a primitive snake species. They are also well known for their beautifully iridescent scales and their ability to reproduce in huge numbers. 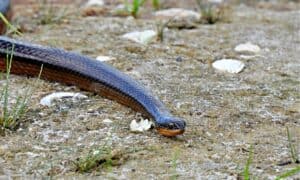