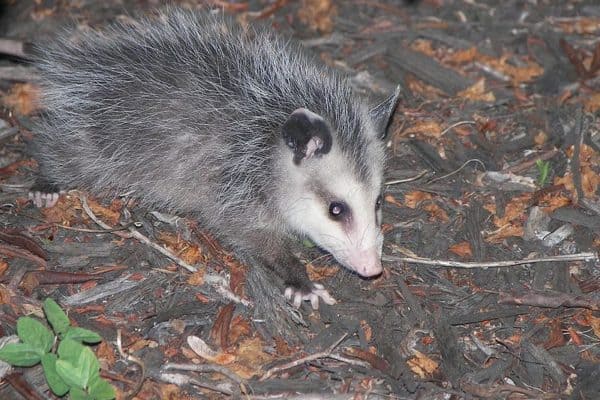 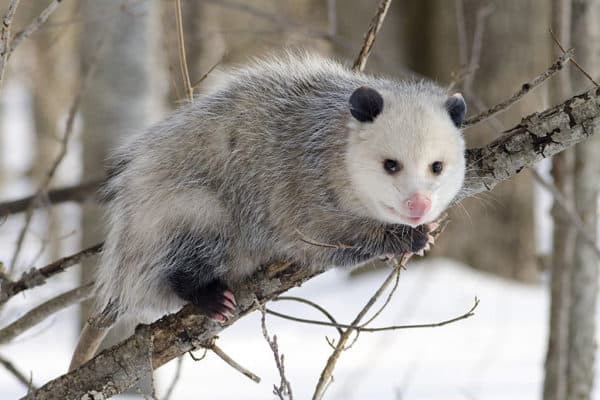 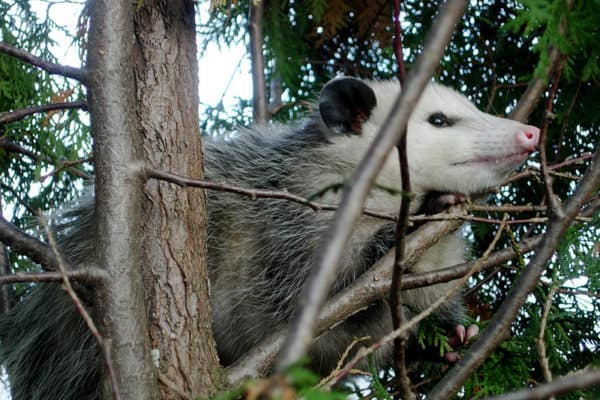 Opossums hold the distinction of being the only marsupial that lives in the United States and Canada!

Throughout much of United States history, opossums were widely hunted and consumed by people. Although this remains true in some areas of the southern U.S., these savvy marsupials are now better known as pests due to their scavenging habits that leave garbage cans upended and messes in their wake. They continue to be popularly hunted in many parts of Central and South America; in fact, restrictions have been enacted to curb overhunting of opossums in those areas.

Consisting of more than 103 species that span 19 different genera, the scientific name for opossums is Didelphidae. This mammal is classified in the order of Didelphimorphia, which is the largest in the Western Hemisphere. The term reflects the fact that opossums essentially have two wombs – one in which babies initially grow and a pouch where they continue to mature – with “di” meaning “two” and “delphus” meaning “womb.” The Virginia opossum, the only species of opossum in the U.S. and Canada, has the scientific name of Didelphis virginiana.

The word “opossum” was first recorded between the years of 1607 and 1611. It is believed to have been borrowed from the Powhatan language and derived from a Proto-Algonquian word, “apousoum,” which means “white dog or dog-like animal.” The first recorded instances of the word can be traced back to John Smith and the Jamestown colony of Virginia.

A type of mammal known as a marsupial, a fully grown opossum is roughly the size of a housecat. On average, possums, as they are also known, measure approximately 2.5 feet long from nose to tail and weigh between 8.8 and 13.2 pounds. Mostly gray in color, opossums typically have white faces and long, pointed noses. Inside their mouths are 50 teeth – more than any other land-based mammal in North America.

In addition to having four short limbs, opossums have specialized tails that they use in a variety of ways. Because these rat-like tails are capable of gripping onto things, they are regarded as prehensile. Thanks to this feature, opossums can use their tails to help keep their balance, to aid in climbing trees, and to hold onto nesting materials while climbing. Young opossums use their prehensile tails to cling onto their mothers’ backs while being carried around. Contrary to popular belief, however, opossums do not hang upside down from trees by their tails like bats.

These mammals’ hind legs also feature opposable thumbs, which allow them to hold onto branches and the like even more effectively.

Male opossums are typically slightly larger than females. They also have larger canine teeth and tend to be significantly heavier.

Solitary and nomadic in general, opossums have a distinctive, slow-moving, hobbling way of getting around. Primarily active at night, when they scavenge for food and engage in most other activities, these mammals’ eyes are well-adapted to darkness. By day, opossums tend to den up in convenient cavities rather than making their own nests. Examples include inside tree holes and brush piles or underneath manmade structures.

During the warmer months, opossums tend to stay on the move. They typically travel wherever food takes them. In the winter, these marsupials tend to stay put in more permanent nesting sites. However, they remain moderately active throughout the colder months and therefore are not true hibernators.

One of the most well-known behavioral features of opossums is their tendency to play dead when confronted by predators. Also known as “playing possum,” the technique is a second resort if the mammal’s initial reaction to a threat – hissing, baring its teeth, and growling – fails to scare it away. If a predator proceeds to attack, an opossum will become completely limp and enter an almost catatonic state. Flopped over on its side, the marsupial may close its eyes or leave them staring blankly into space. With its tongue extended, the creature can appear remarkably dead. What people often don’t know is that opossums also typically defecate and emit a foul-smelling, green substance from its anal glands while playing dead. The opossum may remain in this state for up to six hours; during that time, its breathing and heart rate slow down significantly.

Although they’re not considered arboreal marsupials (which live in trees), opossums are excellent tree climbers and spend plenty of time up in canopies. They possess sharp claws that are excellent for grasping into tree bark, and they use their prehensile tails to assist in climbing and maneuvering around. Incredibly, opossums can also clean themselves of ticks and are capable of consuming upwards of 5,000 of them per season.

Only a single species of opossum, the Virginia opossum, is found in the United States and Canada. This species’ habitat extends into northern Canada and as far south as Central America. South of there, dozens of additional species of opossum may be found.

Opossums have adapted for survival in North, Central, and South America by developing prehensile tails that let them grip tree limbs. The opposable thumbs on their hind legs assist in this regard too.

Given the vast area that they inhabit, opossums are capable of surviving across a variety of climates.

Opossums are scavengers. Conveniently, they are also omnivores, which means that they are willing to scavenge both plant and animal materials for subsistence. They are well-known for scavenging from humans; in particular, they tend to get into dumpsters, garbage cans, and the like looking for food.

Opossums are also attracted to carrion (decaying flesh), so they are often seen consuming roadkill. In general, opossums’ diets typically consist of fruit, grass, and various types of nuts.

These mammals will also hunt birds, mice, worms, snakes, insects, and even chickens. Many species of opossum are immune to the venom of rattlesnakes and pit vipers and are therefore able to prey upon those creatures.

This diet flexibility is one of the many attributes that have made the opossum such a successful species.

Humans are the biggest threat to opossums. Although not common in the United States anymore, these mammals were once hunted and consumed regularly; President Jimmy Carter was known to hunt them. Opossum hunting remains popular in many parts of Central and South America, where local governments have placed restrictions on hunting possums. However, opossums are classified as “least concern” by the International Union for the Conservation of Nature (IUCN) so they are not considered to be endangered.

Opossums mate from the mid-winter through the mid-summer. In a single year, a female opossum can have multiple litters of baby opossums. After mating, female opossums typically give birth in about two weeks.

Up to 20 opossums may be born in a single litter. On average, however, fewer than half survive. When they are born, baby opossums are almost entirely helpless. Blind, naked, and almost transparent in appearance, newborn opossums measure about half an inch in length and weigh just 1/200th of an ounce; this makes them roughly the size of a honeybee.

Immediately after being born, baby opossums crawl into their mother’s pouch. There, they encounter a horseshoe-shaped arrangement of 13 teats, which they immediately latch onto. Those that are left without a teat to latch onto perish. Once latched on, the teat swells up and remains in place in the baby's mouth for a period of about two months. At that point, the babies’ eyes start opening, and they start emerging from the pouch on occasion and may be carried around on their mothers’ backs while hunting. They become completely independent at around three months of age.

The average lifespan of the common, or Virginia, opossum is one to two years.

Although they face several predators – most notably, humans, dogs, and cats – opossums are survivors that reproduce rapidly. Therefore, their populations have remained stable in modern times, and they are not classified as being endangered animals.

What do opossums eat - are they carnivores, herbivores, or omnivores?

Opossums are omnivores, which means that they eat plants and animals indiscriminately. Scavenging is a major way in which they survive, so they are known for raiding dumpsters and other manmade structures for sustenance. If they encounter dead animals, or carrion, they will opportunistically eat them. As a result, it is not uncommon to find opossums eating dead animals on the side of the road.

These creatures also eat many insects and rodents, which makes their presence beneficial to humans in many ways. Indeed, they have been nicknamed “Nature’s Little Sanitation Engines” for their tendency to subsist off of common pests. They are also able to find and eat ticks off of their bodies and can consume up to 5,000 of them over the course of a single season.

Possum versus opossum: What’s the difference?

The word “opossum” is derived from an Algonquian word, “apousoum.” Colonists who encountered opossums for the first time during the 17th century interchangeably called them “opossums” and “possums.” This practice has carried into modern times, and both terms are considered valid. However, they do not denote two distinct animals.

Can an opossum get rabies?

Like all mammals, opossums can technically contract rabies. However, it tends to happen only rarely. Scientists believe that this is mostly due to the marsupials’ low body temperature, which is believed to inhibit the rabies disease. Contrary to popular belief, a hissing opossum is not necessarily a rabid one; hissing is merely a normal defense mechanism that the creature resorts to when threatened. Although opossums rarely carry rabies, they may carry other germs and pathogens, including ones that can cause diseases like leptospirosis in humans.

Are opossums good to have around?

Although humans understandably dislike having their garbage cans raided by opossums, the reality is that these creatures tend to do more good than harm in the scheme of things. That’s mostly because they avidly hunt and consume various types of insects and rodents, including mice and rats. Indeed, the nickname “Nature’s Little Sanitation Engineer” has been bestowed on the opossum for its ability to clear away many unwanted pests from areas of human habitation.

Opossums are known to actively pick out ticks while grooming themselves, so they tend to eat a lot of them. In fact, it has been estimated that an opossum may eat upwards of 5,000 ticks in a single season. They eat insects of all kinds, so they eat ticks that they run across in the wild as well.

Opossum skulls are sometimes used for decorative purposes, so they are often found for sale online.

Humans have nothing to fear from opossums. These mammals rarely contract rabies, and they don’t attack humans at random. When feeling threatened – for example, if cornered inside of a garage – an opossum will react by hissing, baring its dozens of teeth, and growling ominously. If approached further by a human, the possum is more likely to play dead than to lash out.

Do opossums hibernate during the winter?

Although they become far less active during the winter, opossums are not true hibernators. When the weather gets cold and the days get shorter, opossums tend to hunker down in more permanent nests. However, they continue to emerge regularly from those nests and remain active throughout the season.