The rainbow boa is named for its iridescent skin that refracts light and creates a rainbow-colored effect. 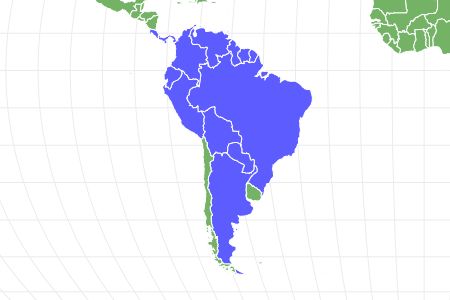 View all of our Rainbow Boa pictures in the gallery.

View all of the Rainbow Boa images!

The rainbow boa is a brown-patterned reptile that primarily seeks out rodents and small birds in its diet.

It prefers warm temperatures with high humidity for the most part, and it is endemic to Central and South America. Instead of determining sexual maturity by age, the males must be at least four feet long to mate. Temperature plays a big role when their eggs hatch, which is why they often choose warmer locations to live.

Where to Find Rainbow Boas

The main location to find this boa is broad because the different types are spread throughout Central and South America. They prefer land, often living in humid weather conditions with high temperatures. These predators primarily hunt on the floor of the forest, but they will climb up trees and bushes to rest.

If you want to buy boas as pet snakes, you can visit a local pet store that sells exotic reptiles. They’d direct you to the proper enclosure and tank size needed to support this hefty pet. Generally, their cost is difficult to determine because the pet trade is so regulated. Some cost over $400 for intermediate pet owners but finding a range of prices is difficult. Furthermore, the cost of the right tank size is high, which is why it is best to seek out these boas at zoos or in nature instead.

The rainbow boa, sometimes called the slender boa, has the scientific name of Epicrates cenchria. The name comes from a combination of tributes to scientists and researchers who were pivotal in the discovery of multiple snake species. It comes from the Reptilia class as part of the Boidae family.

The 9 Different Types of Rainbow Boas

There are five main breeds of these boas, though only one of them seems to be at risk of becoming endangered. With proper identification, you’ll see how a few differences can completely change the way you look at them. All of the breeds belong to the Epicrates genus.

As they are endemic to Central and South America, the identification of a global population is hard to pinpoint. One of the biggest threats to these predators is the pet trade since their beautiful patterns and colors make them ideal for pet sales. They also constantly deal with damage to their natural habitat, which is used for ranching, agriculture, and commercial development, despite their ability to control small mammal populations. When left alone, their average lifespan can reach well over 20 years with a 5-month gestation period.

According to the IUCN, the conservation status of this boa constrictor family is “least concern,” though it hasn’t been assessed since 2013. The Argentinian rainbow boa seems to be the only species at risk as it is “near threatened” (as of 2020).

How to Identify a Rainbow Boa: Appearance and Description

Though it is named for one of the most natural assortments of colors in the world, the Brazilian rainbow boa isn’t actually bright and bold. Instead, the majority of their bodies are brown or reddish-brown colors, featuring three solid black stripes behind the head. With their natural ridges along with the scales, it looks as though they reflect bold colors as if through a prism, even though the real colors are neutral tones. Along their back, you’ll see black rings that look almost like blotches. Still, this species has many variations in color, and they range from 4-6 feet long with a head that exceeds the width of their neck, making it easy to discern from the tail.

How to identify a these snakes:

Rainbow Boas: How Dangerous Are They?

Though these snakes look intimidating, take a breath of relief because they are non-venomous. Even if they attempt to bite you, they cause anything more than a scratch like a cat would. Whether the snake is your pet or in the wild, the best thing that you can do is to remain calm. If nothing else, the bite is meant as a way to defend itself, not actually do any damage. Relaxing will allow the boa to let go and go back to its enclosure or natural surroundings without much injury.

These boas are a common pet amongst intermediate owners for their docile nature and beautiful appearance. Since they don’t have venom, they are a much less risky option, though they require access to a balanced diet and plenty of space in their habitat.

Even in the wild, the rainbow boa is not known to be a pest. They can be shy yet aggressive if disturbed, and they typically go after small prey. Basically, if you leave them alone, they won’t bite.

If you choose to adopt these pet snakes, you need to research proper care and tank size for your particular area. Even baby boas need plenty of space to hide and move in their enclosure to prevent boredom and aggression. When you first bring them home, don’t be surprised if the baby boa attempts to nip at you until they are comfortable.

Yes. Since this type of snake tends to be rather shy, they become aggressive if they do not want to be handled or if they feel threatened.

Due to how aggressive and timid they can be the rainbow boa is not a good pet for any beginner. Individuals who have some experience with snakes are better suited to this particular species.

How big do rainbow boas get?

The average size of a rainbow boa is 4-6 feet long, giving them a medium-sized body. When they are born after the five-month gestation period, the typical size of a baby boa is 15-20 inches long, growing up to nearly 40 inches in the first year.

Though they can be quite shy, this reptile tends to be rather calm when handled regularly. The babies are a little nippier when they are young, which is due to their natural instincts to protect themselves. Once they have acclimated to their surroundings, they become much easier to handle. Generally, Brazilian rainbow boas prefer only 10 minutes of handling at a time until they are used to their habitat.

Are rainbow boas good for beginners?

No. This type of snake is best for intermediate pet owners.

No. In fact, most boas are not venomous at all, choosing to constrict their prey before devouring it.

How do rainbow boas hunt?

These boas have heat-sensing pits along their jaw, which they use to look for prey on rocky terrain or on the ground. Though they can swim, they often choose not to hunt in the water unless necessary.

Where do rainbow boas live?

Brazilian rainbow boas primarily live near the Amazon River, the coasts of Guyana, the southern region of Venezuela, Suriname, and French Guiana. Their location entirely depends on their access to humid weather, though they also can live comfortably in savannas with open space to hunt.

What do rainbow boas eat?

These predators are carnivores. When found in the wild, the typical diet includes rodents and birds, though they will also digest lizards and some aquatic animals as their prey. Once they’ve captured their prey, they constrict it to kill it before eating it. Most pet owners feed their rainbow boas live rats.