iStock.com/GatorDawg
Share this post on:
More Great Content:
Coyote Scat: How to Tell if a…
Coyote vs Wolf: The 6 Key Differences…
What do Coyotes Eat?
Coyote Howling: Why Do Coyotes Make Sounds…
Coyote Predators: What Eats Coyotes?
Pet Coyotes: Do Not Try This! Here's…

With their lean builds and scruffy coats, coyotes are sometimes perceived as the scrappy and sneaky counterpart to more noble canines like wolves and domesticated dogs. Known for their prodigious cunning and their hauntingly distinctive howl, the coyote has been revered in some indigenous American cultures as a trickster spirit and reviled by ranchers as a nuisance.

Beyond the legend and reputation of the coyote is a lot of misinformation. This canine’s reputation as a trickster is reflective of a sharp mind and adaptable personality that’s allowed them to adjust better than other animals to human encroachment. And while coyotes can genuinely spread disease and affect the livelihood of ranchers by preying on livestock, that doesn’t do justice to the complex and often beneficial impacts coyotes have on their habitats. The facts behind how coyotes hunt and interact with their packs can tell us a lot about who these animals really are.

Why Animals Hunt in Packs

Practically any behavior in the wild can be evaluated in terms of risk and reward. The krill shrimp that makes up the bulk of a flamingo’s diet gives them bright pink feathers that stand out to predators, but it’s also a readily available food source that can be foraged in waters deep enough to protect flamingos from predators. Flamingos further increase their chance of survival by foraging in flocks, but most prey animals don’t have that advantage.

Grazing animals like llamas and bison usually gather into herds, both because it allows them to spot predators more easily on open plains and because it shares the risk of being individually preyed upon. And by foraging and migrating together, prey animals can also minimize the energy cost of searching for food. The consistency and scale of these group behaviors are limited by the volume of resources available, and predation plays a significant role in preventing herds from becoming too large and overgrazing.

That calculus of weighing energy expenditure against the value of nourishment is also at the very root of why predators gather into packs. While group foraging behaviors are the standard among most prey animals, a majority of predator species are solitary hunters. This can be credited to a phenomenon known as economic defendability, which is simply a cost-benefit analysis of maintaining a territory — the functional equivalent of having roommates or not. As with prey animals, the availability of food is the biggest factor to consider. In environments where prey sources are scarce, territoriality is usually at its fiercest and most deadly. If a predator can protect a territory large enough to sustain its hunger and habitation needs, there’s little need to cooperate with another predator. But solitary doesn’t necessarily mean antisocial, and some predators can overlap in the territory if there’s no immediate conflict of interest. This can be most prominently seen at shared but plentiful resources like watering holes and large carcasses. As a particularly dramatic example, bears and wolves have been witnessed feeding in peace on the corpse of a beached humpback whale.

The biggest lure for a predator to develop pack hunting tactics is the availability of the big game. African lions are the primary predator of the roughly two-ton giraffe — a seemingly sensible choice considering a single adult could feed a pride of lions. It’s a highly dangerous hunt that can require the entire pride and expend a great deal of energy, so giraffes are only hunted when smaller prey is scarce. Even when hunting in packs, social structure and size are typically designed towards maximizing hunting efficiency. Wolves are some of the most effective pack hunters in the world, and that’s largely thanks to their sophistication and patience. A pack may spend weeks trailing an elk herd, observing the crowd for particularly vulnerable prey, and evaluating weather and terrain conditions before planning their strike. And once they do, successful wolf packs will operate as orchestrated and tactical hunters able to improvise when necessary. Pop culture tends to characterize wolves as loyal and devoted family members and coyotes as shifty loners, but these canines are closely enough related to breed. The facts tell a complicated story.

Environmental conditions and food and habitat scarcity can have a dramatic impact on how a species develops their social and food gathering behavior, and coyotes have managed to adapt exceptionally well thanks to the fact that they’re highly opportunistic predators. There’s a prevalent understanding that coyotes are hungry scavengers that subsist primarily on garbage and pets. It may seem a valid point when you consider many urban coyotes eat up to 25% human trash, but it doesn’t do justice to the complex adaptability of the coyote’s hunting methods. Urban coyotes are often solitary hunters that subsist on human food scraps because that’s what is available, but the story becomes significantly more complex when you look at the larger picture.

Coyotes are pack hunters, very much like wolves. However, unlike wolves, they respond to being hunted by scattering and becoming solitary hunters. When this happens, all of the females begin having at least one litter of pups rather than the whole pack working together to raise the puppies of a single monogamous pair. In other words, the more coyotes are hunted, the faster they reproduce and the farther they spread out. Given that we have been trying our best to kill off all the coyotes, is it any wonder that their habitat now extends from Canada through the United States and Mexico and into Central America? It also includes mountains and forests despite the coyote’s preference for desert and plains.

While theses scattered coyotes sometimes gather together into packs to hunt for larger game like deer, they’re more prone to hunt alone or with a partner. If a group of coyotes is allowed to form a real pack and hunting pressure is taken away, they will regulate their own numbers and form into a stable pack. These stable packs are much less likely to injure livestock, kill pets, or encounter humans. The older, more wary coyotes become the leaders and pass on their accumulated skills to their pups. Given that the adolescent coyotes who are trying to learn how to hunt on their own are the ones most likely to prey on domestic animals, these stable packs are better for everyone.

With their wiry bodies and nervy agility, they’re capable of chasing rabbits, snakes, rats, and squirrels down capably and are known to prey on birds like sparrows as well. The main food source for most coyotes are mice.

These canines won’t pass up a free meal even if that takes the form of roadkill or another animal’s trophy, but they aren’t asking for a meal ticket. As omnivores, 10% of their diet takes the form of berries, fruits, and grasses. Being pint-sized might initially seem like a disadvantage, but the facts demonstrate that coyotes have leveraged an apparent weakness into cross-continental expansion. Hunting for large predators is simply rarely the best option available. Coyotes will instead forage and hunt in pairs, scoping the environment for prey and sites to forage and working together to flush out and kill smaller animals.

Why Coyotes Gather in Packs

There have been numerous active attempts to exterminate the coyote population over the years, yet they’ve only expanded both in population and geography. Today, federal efforts that kill thousands of coyotes a year are intended only to control the population — and they’re largely ineffective at that. This hunting pressure is the driving force behind their expansion. The sophistication and flexibility of their societal structure have allowed them to persevere in the face of relentless efforts to kill them off.

While they may only rarely benefit from pack hunting, coyotes have a lot to gain from the secondary benefits of cooperation. Most coyotes will belong to a pack that will generally consist of five or six adults and the latest litter of pups. A monogamous alpha breeding pair is the nucleus of every pack, helpfully reducing the threat of the pack’s territory from being overpopulated. The typical territory can span from 5 miles to three times that or roughly the size of a jaguar‘s territory.

The pack members may hunt alone, but they work together to protect their territory. Threats can come in the form of lone coyotes, breeding pairs looking for territory, or larger predators like wolves. Territorial disputes can be heated, but they’re made rarer by the fact that territories rarely overlap. The space between these territories is often shared by multiple packs in relative peace — though that’s highly contingent on the current hunting and foraging conditions. Joining a pack has advantages to the lone coyote, which might otherwise find itself insulting multiple alpha coyotes in a single stretch of hunting grounds.

It’s also a persuasive argument to stick around with the pack you’re born into. Pack members outside of the alpha pair are often adult children of the pair, although they may also be unrelated coyotes that have joined the pack out of mutual opportunism. Since a coyote litter is typically four to seven pups, there’s only so much room. When pups reach adulthood at roughly nine months of age, most will venture out to find a mating partner and establish their own territory.

The vision of the coyote as a loner trickster is a romantic and worthwhile one, but it only shows us one side of a socially complex animal. Research into the coyote’s aggressive population revealed that actively killing coyotes only disrupted their social structure and their self-selected breeding. Members of packs that were previously satisfied instead leave to find new packs or breeding partners. The coyote’s success comes down to the fact that they adapt well to the environments they extend into and create largely regulated territories. Coyote incursions into cities and attacks on cattle are genuine issues, but every new understanding about these creatures leads us closer to tenable solutions. 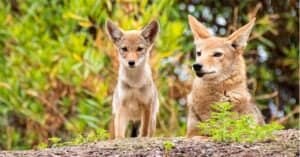