Click through all of our Llama images in the gallery. 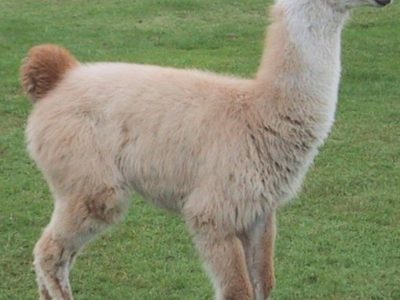 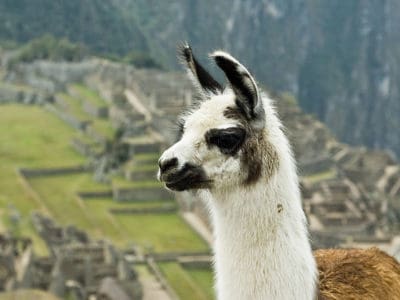 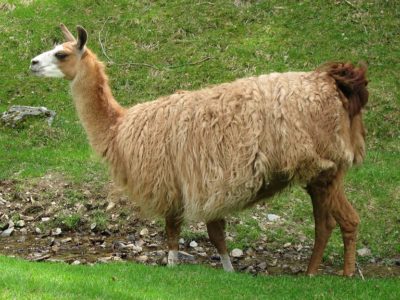 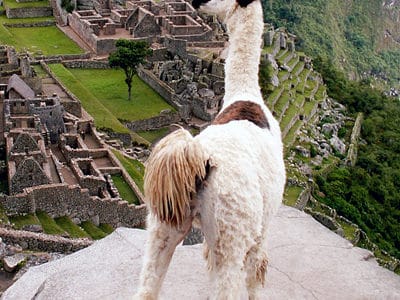 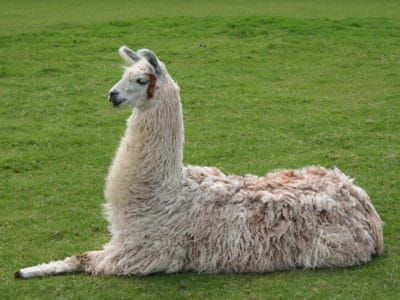 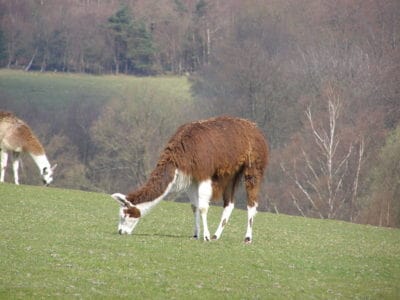 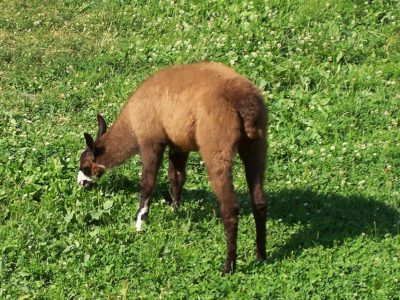 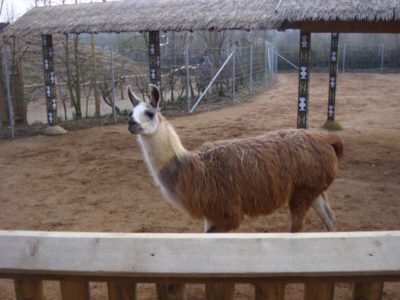 View all of the Llama images!

One of the Few Animals that Humans Can Safely Hug

Dependable, lovable, and calm, llamas are domesticated pack animals traditionally used by Andean cultures in the mountains of South America. Additionally, over the past four decades, they have been imported by farmers, breeders, and exotic pet lovers the world over. Learn about the friendliest animals in the world here.

Members of the camel family, llamas are cousins with alpacas. Researchers also believe that they’re the domesticated descendants of guanacos, a closely related wild species. Unlike other cameloids, llamas don’t have dorsal humps, but they do have smiling faces. In fact, they’re so gentle and empathetic that scientists categorize llamas as “charismatic megafaunas,” meaning they’re one of the few species that humans can safely hug.

Female llamas are called either “dams” or “hembras.” Males are called “studs” or “machos.” Castrated males are known as “geldings.”

Llamas are animals that come in a wide variety of sizes and colors.

Standard-sized adults range in height from 1.7 to 1.8 meters (5 feet 7 inches to 6 feet) tall and weigh between 130 to 200 kilograms (290 to 440 pounds). From the tops of their heads, llamas are about the same height as tall humans but weigh a bit more. The largest llamas weigh about the same as gorillas, lions, and tigers.

Llamas can be brown, white, black, grey, and piebald, or spotted. Their soft, lanolin-free fur is highly prized for clothes, knitting, and handicrafts. Llama outer hair is coarser and used for ropes, rugs, and wall art.

Llamas sport long banana-shaped ears that serve as mood rings. Pinned back ears indicate that an animal is feeling agitated or threatened. Perked up ears mean they’re happy or curious. Llamas only have two toes. Additionally, their feet are narrow and padded on the bottom, which allows the animal to walk on rough mountain landscapes comfortably.

Due to their very long large intestines, like camels, llamas can go long periods without water.

Llamas are very social animals that prefer to live in herds. Like humans, they care for the other animals in their packs, which operate like families. Animals with high herd status can be bossy, but they’re also protective. Interestingly, herd status is continuously in flux. One week an individual may be the top llama, only to find themselves at the bottom of the rung the following week. To climb the social ladder, males regularly challenge other males. Dominance scuffles are like schoolyard fights that involve spitting and trying to knock each other off balance.

Owners and handlers must be careful not to over socialize llamas, though, because it can lead to berserk llama syndrome. A psychological condition that affects males of the species, berserk llama syndrome happens when animals become so comfortable with humans that they start to see them as fellow llamas, resulting in kicking and spitting tantrums. Bottle-fed llamas are especially at risk of developing the condition.

In recent years, llamas have been increasingly used as therapy animals for nursing homes, veterans’ homes, hospitals, and special education facilities. To be considered for the job, llamas must pass a series of tests demonstrating their ability to be touched by strangers and staying calm when an argument erupts near them. Some llama shows even have a public relations category where the animals must show compassion by lowering their head to a stranger sitting in a wheelchair.

Incredibly efficient pack animals, llamas can carry 25 to 30 percent of their weight, which translates to about 50 to 75 pounds, for up to 20 miles at a time. Andean people have long used them to carry things through arduous mountain regions. However, when llamas are freighted with too much weight, they will sit down and refuse to move until their load is reduced.

Llamas primarily communicate via humming and can recognize individual vocalizations. When danger descends, llamas will let out a loud and shrill “mwa” sound to alert nearby herd members.

Llamas are also good jumpers. In 2017, a Lama glama named Caspa earned the title of highest jumping llama when he cleared a 1.13 meter (3 feet 8.5 inches) hurdle without touching the bar!

In the modern era, the majority of llamas live in South America, primarily in Argentina, Bolivia, Chile, Ecuador, and Peru. During the 1970s and 1980s, South American exporters started sending llamas to farmers and breeders around the world, including North America, Australia, and Europe. By the early 2000s, the llama business was booming, and 145,000 of the animals called the United States and Canada home. At that time, a single llama could sell for as much as $220,000. But then the Great Recession hit and llama investment money dried up. Unfortunately, the older llamas died off. As a result, only about 40,000 llamas live in North America today. However, that number is increasing.

Llamas are often used as livestock guards for lamb and sheep flocks. Male geldings are typically trained for the position and are introduced into their flocks at two years old. Farmers report that llamas are great at the job and regularly scare off coyotes and feral dogs. However, using two llamas for one flock doesn’t work well because the geldings bond with each other instead of their charges.

Generally speaking, llamas can live happily in both mountainous regions and open plains.

Llamas are herbivores, meaning they eat plant-based diets and no meat. Due to their complex stomachs, llamas can process lower-quality, high-cellulose foods. A typical llama meal consists of bromegrass hay, alfalfa hay, corn silage, or grass. For their health, adding corn silage and minerals is also a good move.

Llamas eat about 10 to 12 pounds daily, or about 2 to 4 percent of their body weight. The cost of feeding a llama is about the same as feeding a big dog.

Since llamas live as domesticated animals, they’re protected by their owners and handlers. As a result, they don’t have to worry too much about predators. However, cougars, mountain lions, and snow leopards are natural enemies that will attack llamas if they get close enough. Technically, humans are also llama predators because, at times, people have hunted them for their meat, hides, and fur.

Llamas are vulnerable to a variety of bacterial, fungal, and viral diseases. Some also suffer from cancer and various heart conditions. In the early 20th century, a foot-and-mouth disease pandemic spread throughout the llama population.

Female llamas are induced ovulators, meaning they don’t release eggs on a cycle. Instead, an outside stimulus initiates egg release. As such, llamas often become pregnant on the first mating attempt.

Breeders and farmers have three different mating options for their herds. The first is harem mating, which involves one male living with a bunch of females. When a male and female feel like mating, they do. The second method is called field mating. Handlers who use this method set a male and female out into a field for a period and hope they mate. Hand mating is the third type. Owners put a male and female in the same pen and monitor their interaction. If they don’t mate on the first day, the animals are separated for a day and then brought back together for a second attempt.

Males and females of the species must be kept separate or, like rabbits, they’ll never stop breeding!

Llamas mate in the kush position, lying down, which is unusual for large farm animals. Their mating sessions usually last between 20 to 45 minutes, and females have an 11.5-month-long, or 350-day, gestation period. During mating sessions, males make a continuous sound known as an “orgle,” which sounds a lot like gurgling.

When it’s time for a mama llama to give birth, the other females in the herd instinctively gather around her for protection. They give birth standing up, and the whole process is usually done within 30 minutes.

Mothers almost always give birth between 8 a.m. and 12 p.m. on warmer, sunnier days. Scientists believe this is an instinctual phenomenon that llamas developed to avoid hypothermic conditions present during cold mountain nights.

Baby llamas are called “crias,” which is the Spanish word for babies. At birth, they weigh between 9 to 14 kilograms (20 to 31 pounds), and they’re usually walking and suckling within an hour of being born.

Mothers can’t lick their newborns like other mammals because their tongues only extend half an inch outside of their mouths. Instead, they nuzzle and hum to their children for comfort.

Crias feed on their mother’s milk for five to six months. Females reach puberty at about 12 months old, and boys don’t start mating until about 3 years old.

Llamas live between 15 and 25 years. The current oldest living llama is a gent named Julio Gallo that lives in Olympia, Washington. In 2017, he was 28 years old.

The International Union for the Conservation of Nature does not list llamas as a threatened species. Though no formal count currently exists, scientists believe that about 8 million llamas now roam the Earth, the majority of which are in South America.

The International Lama Registry, which is headquartered in Montana, keeps genealogical records of North American llamas for breeders.

Are llamas carnivores, herbivores, or omnivores?

Yes, llamas are sweet, compassionate, friendly animals. They have such lovely personalities that nursing homes, hospitals, and special needs facilities invite them in as therapy animals.

Generally speaking, llamas are not dangerous. However, llamas that develop berserk llama syndrome may grow very aggressive and try to fight with humans by kicking and spitting.

Llamas vs Alpacas: What's the Difference?

At first glance, llamas and alpacas look very similar, but there are several key differences. For starters, llamas have long ears; alpaca ears are short. Similarly, llamas have long faces and alpaca short ones. Additionally, alpacas are smaller than llamas. Personality wise, llamas are more like dogs — social and friendly — while alpacas are more like cats — reserved and independent.Despite their differences, llamas and alpacas can interbreed.

What Kingdom do Llamas belong to?

Llamas belong to the Kingdom Animalia.

What phylum do Llamas belong to?

Llamas belong to the phylum Chordata.

What class do Llamas belong to?

Llamas belong to the class Mammalia.

What family do Llamas belong to?

Llamas belong to the family Camelidae.

What order do Llamas belong to?

Llamas belong to the order Artiodactyla.

What genus do Llamas belong to?

Llamas belong to the genus Lama.

What type of covering do Llamas have?

Llamas are covered in Fur.

In what type of habitat do Llamas live?

What do Llamas eat?

What are some predators of Llamas?

Predators of Llamas include humans, pumas, and coyotes.

What is the average litter size for a Llama?

The average litter size for a Llama is 1.

What is an interesting fact about Llamas?

Llamas are natively found in the Andes Mountain range!

What is the scientific name for the Llama?

The scientific name for the Llama is Lama Glama.

What is the lifespan of a Llama?

How fast is a Llama?

A Llama can travel at speeds of up to 28 miles per hour.