Geyser vs Volcano: What’s The Difference?

Wirestock Creators/Shutterstock.com
Share this post on:
More Great Content:
The Absolute Best Camping Near Salt Lake…
The 10 Countries With Stars On Their…
12 Natural Home Remedies and Products For…
Discover The Highest Wind Speed Ever Recorded…
What's the Largest Planet in Our Solar…
Meet The Holy Grail of Ice Age…

Geysers and volcanoes are both high-temperature eruptions from within the earth. While people often confuse them for each other because of their similarities, these two geological phenomena are remarkably different. A geyser is an eruption of hot water and steam that isn’t harmful. Volcanoes, on the other hand, involve hot molten lava (or magma). Although they have some similarities, they differ in terms of their composition, mechanisms, and effects. In this article, we’ll compare the Geyser vs Volcano to help you understand the difference between them.

Geysers (and the closely related hot springs) are manifestations of volcanic activities. However, they’re not volcanoes. Let’s define these two eruptions to understand their differences.

What is a Geyser?

In simple terms, a geyser is a type of vent in the earth from which a jet of hot water and steam is forcefully ejected from within the earth. Usually, the geyser erupts with a force that is massive enough to shoot the stream of water a few hundred feet into the air. The dramatic expulsion of water is what makes geysers such attractive tourist sites.

Geysers are a rare phenomenon. There are about 1000 of them all over the world. The most famous one is the Old Faithful geyser in the United States. Geysers occur in locations where there’s a coincidence of certain unusual conditions. These include the presence of hot magma beneath the earth’s surface. An abundant supply of groundwater and the presence of vents or fissures through which the water and steam erupt to the surface. Since hot magma is mandatory for geysers to form, they usually form close to sites of volcanic activity.

What is a Volcano?

A volcano is best defined as an opening in the earth’s surface from where lava (molten rocks), volcanic ash, and gaseous compounds erupt to the earth’s surface. The nature of the eruptions depends on the mechanism of the volcano’s formation. In some cases, magma rises to the surface as a fluid through conduits in the earth. They can either flow continuously or shoot straight up like a glowing hot fountain.

Volcanic eruptions can also be explosive. Entrapped gas can cause the magma to become torn into shreds, hurling molten magma into the year. An explosive blast may occur in even more violent eruptions, ejecting solid rock fragments and ash-laden gas thousands of meters into the air.

A volcano erupts molten rocks, which may contain chemicals like iron, magnesium, calcium, and silicon. The lava is formed deep within the earth (about 10 miles below the earth’s surface) and is pushed to the surface by buoyancy. The magma cools off as it comes in contact with air on the earth’s surface, turning into igneous rocks.

There are over 1,300 volcanoes all over the globe. However, not all of them are active. Most volcanoes can be found in an area known as the Pacific Ring of Fire. The largest active volcano in the whole world at the moment is Hawaii’s Mauna Loa volcano. Indonesia is the country with the highest number of active volcanoes.

Geysers and Volcanoes are similar in a lot of ways. Both phenomena result from a strong source of heat originating from within the earth, and they’re characterized by explosive eruptions to the surface. However, beyond these, there are a lot of differences between both eruptions in terms of their content, the mechanism behind them, and their occurrence.

A geyser is caused by a combination of factors. You may even term their occurrence as a coincidence considering that these different factors must be present before it occurs. Geyers happen when superheated groundwater finds its way to the earth’s surface through vents. The hot spring ejects hot water and steam periodically.

On the other hand, a volcano is formed due to the movement of the earth’s tectonic plates. This leads to pressure change which causes the magma beneath the earth’s surface to overflow. Geysers need molten magma as a heat source for the water. Thus, Geysers typically have volcanoes around them. However, not all volcanoes are accompanied by geysers since volcanoes don’t need to have geysers around.

The mechanisms behind the formation of these two natural phenomena are also remarkably different from each other. For geysers to form, water and heat must be present. The geyser needs a system of narrow channels (a sort of subsurface plumbing system) that allow it to come in contact with magma. The water must also gain enough heat for it to develop substantial pressure needed to push it out of the ground explosively.

The formation of a volcano is independent of groundwater. Magma is formed when hot rock, melting slowly beneath the earth’s surface, rises and collects in magma chambers deep below the earth’s surface. As the earth’s tectonic plates move, the friction between them causes earthquakes, cracks, and fissures that allow the magma to break through to the surface close to the edge of the plates.

It is important to note that not all volcanic eruptions are explosive. How explosive an eruption is will depend on various factors, especially the composition of the magma. Geysers, on the other hand, are always explosive. If hot water comes to the earth’s surface without an explosive eruption, it is merely a hot spring.

The degree of destruction or effects on human life that these two natural events can cause is another major difference between them. Since a geyser is just water and steam, it is typically less dangerous compared to volcanoes. The eruption is just hot water under high pressure. It does not destroy settlements or impact human life significantly. In fact, geysers attract tourists, which is more of an advantage than a disadvantage. Of course, you shouldn’t get too close to them as the water is hot enough to cause significant damage.

Active volcanoes, on the other hand, can cause great destruction. They can damage buildings, property, and life. Some eruptions also blow a lot of ash into the air, which affects breathing and visibility. Similarly, a volcanic eruption causes the temperature of the surrounding air to rise, and magma can easily kill plants and animals around. Geysers only eject hot water and steam. They do not contain harmful gasses as Volcanoes do.

As you can see from this Geyser Vs Volcano comparison, these two events are quite different in their composition and mechanism. A geyser is simply a periodic stream of hot water and steam released explosively from vents on the earth’s surface. A volcano, however, is formed by molten rocks exploding explosively from within the earth. Geysers have no adverse environmental impact, but Volcanoes can be quite dangerous and destructive.

Volcano Sharks: The Incredible True Story – Ever heard of Volcano Sharks? Read all about what they are and why they’re called that name.

The Most Destructive Volcano Eruptions Ever – The planet has seen several notable volcano events. Read about the most destructive ones in history.

Difference Between GEYSERS AND VOLCANOES

Eight Ways How to Get Cats to Stop Chewing on Cords 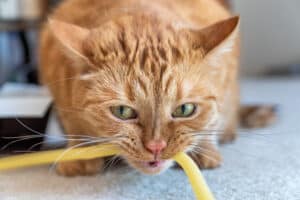