How Deep is the Caribbean Sea?

The Caribbean Sea is nowhere near being the largest sea in the world, but it is still very deep! It is a unique sea with lots of wildlife, over 7,000 islands, and thousands of miles of coral reefs. But how deep is the Caribbean Sea, and what mysterious creatures lurk there? Keep reading to find out!

What is The Average Depth of the Caribbean Sea?

What is the Maximum Depth of the Caribbean Sea?

It is not easy to find information about the bottom of the Caribbean Sea, which is why in 2010, a UK group of researchers from the National Oceanography Centre in Southampton (NOCS) used a robot to map out the trench. During this mission, they discovered extremely hot black smokers at the deepest point yet (3.1 miles). Two years later, they revisited the research and found a new shrimp species.

What Animals Live in the Deep Caribbean Sea?

The Caribbean Sea has a diverse and rich ecosystem. So far, at least 12,046 species have been reported in this sea. Deep sea creatures are still a mystery to most of us since they rarely visit shallow waters. In the deep Caribbean Sea are multiple animals with limited vision and glow-in-the-dark scales. The most common deep Caribbean Sea animals are comb jellies, deep-sea dragonfish, and rattail fish.

Is the Caribbean Sea Deeper than the Atlantic Ocean?

Fun Facts About the Caribbean Sea 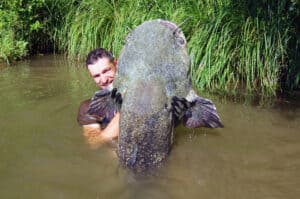