Is a Joro Spider Bite Poisonous?

The Joro spider is an East Asian native arachnid that was recently discovered in the US. They are widespread in Taiwan, Korea, China, and Japan. In the US, it is an invasive family of golden orb-webbed spiders that somehow made their way to Georgia back in 2014. Since then, they’ve swarmed across Northern Georgia into western South Carolina. It’s believed the Joro spider got here via a shipping container.

Akin to a Banana spider, the palm-sized Joro spider is identifiable via its bright blue, red, and yellow colors though this coloring applies mostly to the female. The Joro spider also has a unique webbing. While the typical spider web is a nice drab white, the Joro spider’s is typically gold.

Let’s take a closer look at the Joro spider, including answering a question on many an arachnophobe’s minds, is a Joro spider bite poisonous, and what, if any, the symptoms are?

Are Joro Spiders a Venomous Threat?

Arachnophobes and a few non-arachnophobes might not like seeing a Joro dangling from their ceiling. The spider’s bright color schemes only highlight their size. Legs fully extended, these spiders are almost three inches across! That’s a noticeable difference from the average house spider, which measures somewhere between 3/16th to 5/16th of an inch.

The Joro spider has a venom it uses to subdue prey, usually small bugs. But this substance isn’t venomous to the majority of creatures. The Joro will bite if threatened but the only real risk from the bite is if the attacked has an allergic reaction. The bite itself poses no danger to humans or even their household pets. The Joro’s mouthparts aren’t big enough to cause a reaction greater than the symptoms of a bee sting and require little treatment.

Problems The Joro Spider Can Cause

The Joro spider is more an invasive nuisance to our ecosystems than a poisonous risk. Since coming to the States, they’ve multiplied immensely and rapidly. Females are capable of dropping sacs of 400 to 1,500 eggs in bushes or trees. Hatching in the spring, hatchlings hitchhike and spread, often riding the wind on a strand of silk web.

One benefit of the invasive Joro spider is it eats a variety of other creatures we’d rather not have around, including biting flies, stink bugs, and mosquitoes. Note the Joro spider should not be necessarily labeled in the same category of pest invasions that include the zebra mussel or killer algae. Entomologists list the Joro spider as a creature of beauty that provides free pest control.

Characteristics of the Joro Spider

Here are some definitive physical traits for recognizing the Joro spider.

The female spider legs have deep blue and yellow bands. The abdomen is a mesh of yellow, red, and black asymmetrical patterns. Males have a simple, plain brown body.

In Georgia, the invasive Joro spiders are mostly seen during October and September. Georgia residents report seeing webs as large as 10 feet deep on their property.

The invasive Joro spider has exceptionally long legs and a large abdomen. You’ll find the body of male spiders to be generally 0.27 to 0.39 inches in length. Females come in at roughly 0.66 to 0.98 inches. What adds to the intimidation factor is the Joro spider has leg spans measuring three to four inches.

The Joro lives around twelve months, which is the typical lifespan for a spider.

Keeping the Joro Spider Out

We can talk about all the benefits of Joro spiders eating bugs that no one wants to see but the fact is, most people do not want to see a three-inch spider crawling around the house either. While not venomous for most humans, the sight of these animals is nothing less than intimidating.

The best treatment to make sure you never see a Juro in your home is prevention. Preventive measures eliminate contact with all types of unwanted invaders. Precautions can reduce the cost you have to put out when you do have an invasion. Prevention can have added benefits as well. Measures like sealing cracks and crevices will minimize invasion and can also make the property is more energy-efficient.

Here are a few ways to keep the invasive Joro spider away:

Because of their seasonal hatching and migratory aggression, it’s believed the invasive Joro is eventually going to spread to other parts of the country. The eggs can withstand cold temps and the spiders love to hitch a ride. They travel on winds (crossing between 50 to 100 miles in a single trip). They’ll also leap on a cargo container or car bumper and hang on for the long haul. After all, it is believed the Joro spider came from the East via a shipping crate.

The Joro uses ballooning for a lot of its travel. That’s where the spider spins a silk thread and catches a breeze in the wind. They use wind power to transport themselves as far as they can get, sometimes up to 100 miles. The prevailing wind direction in northern Georgia is southwest to northeast. That leaves the possibility of these creatures ending up as far as Pennsylvania, New York, and Maryland if they can adapt to the cooler climates.

Joro spiders hatch in the spring. They reach maturity by the end of the summer and start traveling in the potential thousands, leaving sacs in trees and on outdoor furniture. The females share webs with smaller mates. By the time the adults die off during the winter season’s first frost, it’s late November. But the left-behind sacs are ready to grow the next, larger generation come the spring.

Should We Kill Joro Spiders?

Being spiders, many people automatically hate them. Their size and creepy, crawling legs can be disturbing to humans. But the Joro spider isn’t dangerous or poisonous and does not deserve outright killing. Experts say hiring a professional exterminator isn’t the answer either. The population multiplies too quickly so any treatment won’t help. It may actually make this worse as it will kill off their competition.

Instead, attempt to manage the symptoms that draw the Joro spider in. Try keeping the home clean of insects the Joro spider hunts. They prey on biting flies, mosquitoes, and the stink bug. These are unpleasant creatures other spiders want nothing to do with. Do what you can to close up entryways that these spiders (and other unwanted insects) use to come on your property and then into the home. Get rid of any webbing that pops up. Managing the symptoms will go a long way to eliminating invasions.

The scientific community is hopeful that, despite being invasive, the Joro spider will gradually make a dent in these other unwanted infestations. Instead of seeing them as pest to be destroyed, try thinking of them as helpful allies. They are Mother Nature’s gift to humans for pest control.

Discover the Largest Largemouth Bass Ever Caught in Alabama 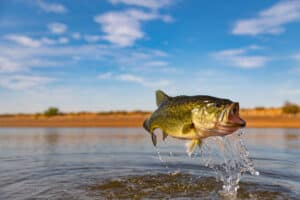