Named after a Japanese spider demon

Click through all of our Joro Spider images in the gallery. 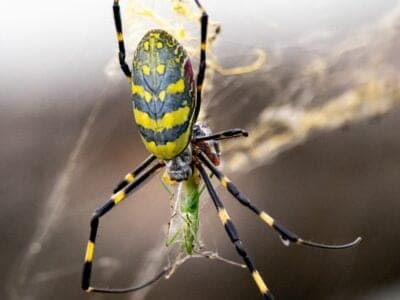 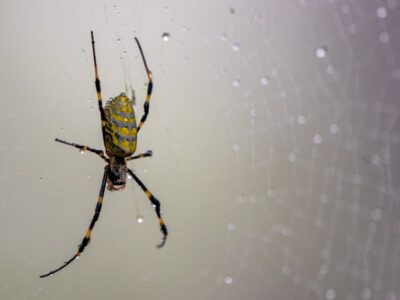 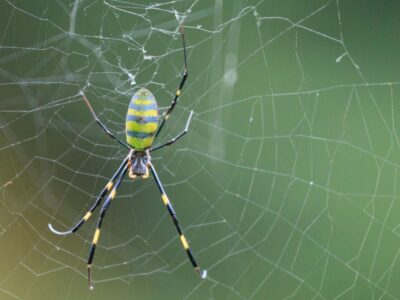 View all of the Joro Spider images!

The Joro Spider — or Trichonephila clavata — is seemingly named after a spider demon in Japanese culture, which is primarily due to its intimidating physique. Though it was once exclusive to regions like Japan and Korea, it has become an invasive species in some areas of the United States, allowing the population to thrive. It takes care of pesky insects like the mosquito and the stink bug, but the orb-shaped webs tend to take over wherever they are attached. When the spider is not building its web for its babies, it can go along the wind on a string of its own silk.

Though the Joro spider is a relatively helpful creature, the invasive nature of the species leads many people to become afraid. After all, they are rather large and intimidating for anyone that has yet to see one in person. They primarily come from Southeast Asia, but they’ve been sighted in Georgia since 2013.

While these spiders ordinarily keep to themselves, they are currently making headlines for their mass numbers in 25 different counties in Georgia. They travel for up to 100 miles with their ballooning technique, gliding on the air currents to their final destination. They can be quite intimidating, collecting in groups around homes and in the woods.

Both the Joro spider and the Golden Orb spider spin the same type of orb-shaped web, and the silk they both produce is gold. However, the main difference in these spiders is their physical appearance. While the Joro spider is decorated in gray and dark blue stripes with a red belly, the Golden Orb spider is usually brown or black with a silvery or plum-colored abdomen.

Here are a few fun facts about the Joro spider:

The Joro spider’s scientific name is Trichonephila clavate. It has no other names to speak of. However, the reason it is called the Joro spider is after a spider demon in Japanese culture. It is from the Araneidae family of the Arachnida class. At this time, they have no other subspecies.

The word Trichonephila was first assigned to the arachnid by Friedrich Dahl in the early 20th century, describing spiders that create woven orbs for their webs. “Clavata,” comes from the modern Latin word “clavatus,” which means “club.”

The Joro spider is a quite colorful species. Even though males are often the colorful ones in the animal kingdom, the same is not true of this spider. Males tend to have a brown and plain body. Females, on the other hand, have asymmetrical patterns along their abdomen in black, red, and yellow, complemented by the bands of blue and yellow along the legs.

The males and females are relatively close in size as well, though the females are the larger ones. While males range from 0.7 to 1 cm, the females typically are more than twice this size at 1.7 to 2.5cm instead. The largest Joro spiders can get even bigger, measuring three to four inches in diameter in Georgia. However, its only defense is its ability to bite, which is not life-threatening.

As intimidating as the size of a Joro spider might be, it is relatively harmless. Though it can release venom through a bite (which is different from being poisonous), it is not aggressive. Instead, they’ll only bite as a way to protect themselves from threats, which is quite painful. These spiders are unafraid to use this defense during mating as well, as the female will often eat the male that she mates with. Still, these spiders have some sense of peace between other Joro spiders as they are able to live in groups in the same area without any other aggression.

To travel, it will use the wind current to “balloon” on, trailing their silk threads from their body to catch themselves in the air. They’ll use almost anything to travel, even holding onto a car bumper or cargo container to go up to 100 miles away from where they are. The only time that the spider tends to bite is in an act of protection. For some people, this bite is painful. Though the spider can release venom, it is not harmful or life-threatening to you (unless you are allergic to this particular spider species).

The main area of the world that the Joro spider lives in is within the borders of Southeast Asia. They are found in Japan, China, Taiwan, and Korea, though they prefer areas with more humidity. They’ll build their home anywhere they can touch.

Since 2013, the spider has become an invasive species in the United States, primarily living in Georgia and the western-most areas of South Carolina. They don’t seem to have an adverse impact on the local ecosystem just yet, but the warm and humid environment is perfect for the arachnid to thrive. They consume some of the less beloved species of insects (like the mosquito), and experts believe that they soon will be naturalized to the area.

The diet of a Joro spider is relatively helpful to the people around it. They are carnivorous, requiring the protein and other nutrients of insects to keep them healthy. Not much is known about how much they need to eat a day, but the fact that they go after common pests tends to make the public a little more welcoming to them.

The only time that the Joro spider will go after a human or something outside of their standard diet is if they feel threatened. They have venom, but it is not lethal for humans. There seems to be no real threat to Joro spiders right now, which is how they’ve managed to spread so rapidly.

Some birds go after Joro spiders, but there is no particular bird species that prefers them. While they may be eaten by other animals that eat insects and spiders, they don’t have a specific predator that seeks them out.

What do Joro Spiders Eat?

The diet is opportunistic of the warm and humid climate they need. Typically, mosquitos are the insect of choice, though they’ll also eat yellow jackets, stink bugs, and more. Their diet doesn’t impact the native species of spiders in the area, eating the insects that other spiders tend to avoid. The web is how they passively capture prey, though other spiders — like the dewdrop spider — have fallen victim to the appetite of this spider speciesof spider.

Males reach maturity by the end of August when they are about two months old. Females take a little longer, reaching maturity no later than October at three to four months old. The male will join the female on her basket-shaped web, which hangs between tree branches. Though she may lay between 400-500 eggs, they are all contained within a single egg sac that is constructed from her silk.

When the baby is still within its egg sac with the others, the adults leave them behind and provide no care as they wait to hatch by summertime. Due to the short lifespan, females typically have no mate for life, coming together only for the continuation of the species. Though there are some cases of multiple males fathering the single egg sac or the female guarded the cocoon, these actions are not widespread enough to say whether it is typical of the species.

At birth, the babies can fend for themselves to eat, walking around just after they emerge. There is no specific name for this baby, though some baby spiders are called spiderlings. On average, both males and females live to be one year old. Adults typically cannot survive the winters as the temperatures drop far below their optimal warmth.

At this time, it is practically impossible to say how many Joro spiders exist in the world. Their recent surge in population in the United States has left many people worried, which is why there are no current efforts to protect them. They are not endangered, and they seem to thrive well in warmer regions. Their only threat is humans, but even those encounters have not been enough to bring down the population.

View all 18 animals that start with J

While the spiders are carnivores, the majority of other animals that they eat are insects. They are particularly helpful because the insects they go after are often pests that you want to leave you alone anyway!

Not exactly. They have venom, but their bite won’t actually hurt people because they aren’t poisonous. The only way you should be concerned is if you are allergic to their venom.

How do I get rid of Joro Spiders?

The easiest way to eliminate this type of spider is to kill them with direct contact, though some people prefer insecticide. Still, using insecticide can kill other insects in the area.

The best approach is a proactive one, keeping the home clean and all food put away to avoid attracting spiders in the first place.

Should I kill Joro spiders?

Not necessarily. Even though they are an invasive species, they benefit areas that have a lot of mosquitos and other bugs since they reduce their population.

Yes! Keep these spiders around to get rid of yellow jackets, stink bugs, and mosquitos.

Where are Joro spiders found?

Typically, these spiders are found in east Asia. Interestingly, it didn’t show up in Georgia until about eight years ago.

Where do Joro spiders come from?

The most common regions with Joro spiders are Japan, Korea, China, and Taiwan.

Why are Joro spiders everywhere?

Joro spiders are an invasive species. They thrive in areas that are warm and humid, giving them plenty of food and comfortable habitats to thrive.

Where do Joro spiders lay eggs?

Anywhere! If the Joro spider can climb onto it, they can lay their eggs. Some people report finding their eggs on outdoor furniture, though they will also lay eggs in trees or through ballooning in the wind.

No. However, birds and certain species of wasps will dine on the Joro spiders.

How many eggs do Joro spiders lay?