Jackson Galaxy: He’s the Luckiest Cat (Daddy) in the World

To hear Jackson Galaxy tell it, becoming the beloved and highly sought-after “Cat Daddy” was as much a surprise to him as it was to anyone. “It was 1993,” he shares. “My life was being a musician and songwriter and performer and guitar player, and I was looking for a job to pay the bills. I saw an opening at the Humane Society [in Boulder, CO], and I took it.”

These days (and what likely seems like nine lives later), Jackson, most widely known as the host (and Executive Producer) of Animal Planet’s hit show “My Cat From Hell” and New York Times bestselling author, is busier than ever — and incredibly grateful that he is. We caught up with the Cat Daddy recently, and he shared the curious curves of his career path, the most altering experience he’s had with a feline, and his best advice for cat owners. Meet this most chill, grateful, and lovely human being, Jackson Galaxy.

A-Z-Animals: How did you become the Cat Daddy?

Jackson Galaxy: I took a job at the Humane Society, and really, it happened pretty quickly from there. The cats just sort of gravitated towards me, and I felt like I understood what they were about, but I didn’t have a ton of experience with cats before that. This was back in the time when we were killing a whole lot of cats in a whole lot of shelters. Our euthanasia numbers were up in the neighborhood of 10-12 million animals a year. So few people in our profession really spent time with the cats — the dogs really demanded more attention. I just started diving in and bringing what I could to it. My personal take was book learning and experientially just being with them, and merging those two things became my niche. Then after about 10 years at the shelter and having worked almost every position there, I went out on my own. I started a company with a cat veterinarian friend of mine doing mind-body consultations [on cats], and then after that, I took my practice with me when I moved to California. Within a month, word got around that there was this guy who looked kinda crazy and worked with cats. That happens in Los Angeles — people start talking about TV shows, and that’s how it all happened.

AZA: Have you always had an affinity for cats?

JG: No. I grew up with a dog. I moved to Boulder with a cat that I found in a barn in Iowa after a snowstorm — he was all messed up. He wound up with me, and then literally the day I was moving from Iowa [to Boulder], this little kitten just showed up on my doorstep. No one claimed him, so he became mine. So I came to Boulder with two cats, but I never felt a level of connection, an empathic level that I did, until I was surrounded in a room with 20 of them.

Euthanasia is the mother of invention, and when you’re back is against a wall and you know this cat you think you can help is not going to make it through the day, then you get your act together quickly. I just felt like I understood them. They came to me for a reason — literally. They would gather around me like I had catnip in my pocket. It was that thing where you’re not looking for it, but the universe presents you with something, so you take it as an opportunity. And with that base, one of the things I could do was educate my co-workers and let them know this is not the end of the world for this cat. Fear is approachable even if it’s in a cage. This is where my background as a writer and performer and in theater actually came into play. It sharpens your observational tools but also your empathetic tools. When you’re acting, you’re not just trying to imitate an old man. You’re trying to get into the mindset of what it feels to have lived a whole life, and what your body is like and all that. So that allows me when I’m with a cat to learn about their lives and bodies and history, and from there make conclusions that I can then try to work on.

AZA: What was the turning point for you when you realized you could make a tremendous difference in cats’ lives?

JG: I made really close friends with the dog trainer at the shelter, and she started talking to me about positive reinforcement and conditioning. She was the first to say what a silly concept to think that cats can’t respond to positive reinforcement. We ALL learn that way — all of us. And when that became part of my language, and I was able to use clicker training with cats, that’s when everything changed. When I was able to demonstrate that within a 2-hour timespan we can take a cat that’s buried in the back of a 2x2 cage behind their litter box and get them to face their audience and take those few steps to the front of the cage, and hence they’ve just become adoptable, that was a game changer. To this day I have a program called Cat Pawsitive — we’ve taken it to over 100 shelters across the country. We’ve had thousands of hours of training with volunteers and staff, and everyone can vouch for it — clicker training saves lives!

AZA: How did you land your hit show “My Cat From Hell” on Animal Planet?

JG: I put the word out there that I was doing consults, and I would teach classes. A friend would introduce me to someone else who knew somebody else, and suddenly you’re making a pilot. It’s not until all these years later that I realize how lucky I was — I wasn’t out there pitching shows. It was just that that show was exactly my life, and that’s exactly what I do, so it wasn’t a huge stretch. I was only here [in LA] for about 6-7 months before we were shooting a sizzle reel on it.

AZA: In the 10 seasons your show was on-air, was there a most memorable cat and owner, or perhaps a most extreme situation, that you’ll never forget?

JG: Every single family and every single cat I worked with became very close to me, and after the show was over, we would stay in contact. But I would say the most altering case I worked with was a cat named Lux, and Lux was this viral sensation. They called him “the 9-1-1 cat.” There was a recording of this person calling and saying “my cat has me trapped in the bathroom.” Lux tested me in a way I never had been. He was very violent and very unpredictable. I did everything from removing him from that house because it was not the right place to getting him in foster care with a family who adored him, but he attacked them. They put up with it for a while, but then it got unworkable. I took him to neurologists, to every vet I could think of trying to figure out what the short circuit was in his head. I hooked up with great vets who helped me think outside the box, and at the end of the day, I adored him and was very attached to him and was very close to taking him into my house because I figured I can deal with it. I finally got him into a sanctuary where he gets to live around people who don’t care if he’s different and a little violent sometimes. Again, I was very lucky that I had those connections and those kinds of friends, but it went on for six months.

This case came to me after we had just finished filming a season. I was on the road filming for six months, and I was burnt out. The next day I get a call saying “we want you to go up to Portland and help this cat,” and I was right back in the saddle. I think humility is so valuable on a daily basis. It’s so important for one to never feel like they know everything. Because eventually you’re gonna have your lunch handed to you, and that’s what Lux did. I still love him to death, and I’m so glad he’s still not just alive, but appreciated and that he’s living his best life.

AZA: Are you still doing the behavioral work ?

JG: Yeah. I’m doing consults. I also do live performances. I tour a live show. I work closely with the Jackson Galaxy Project, which is a division of Greater Good Charities. I have a number of different initiatives that keep me busy so I get to keep my feet in the shelter systems and in animal welfare and try to come up with innovative ways to save cat lives.

AZA: What is the most challenging thing about the work you do?

JG: People’s perception is that I have all the answers. And what I try to throw back is that this is your family member. I know cats, and I probably know your cat to a degree, but your job is to know them better than me. I’m going to give you the tools. I’ll lead you to the water, but you’ve got to drink. I am always going to make sure the investment in your family member is acknowledged and approached in a more complete way, and that’s hard. It may seem like I know everything, so undoing that perception or altering it to a degree is a challenge. And then it’s just challenging to, after 30 years of working with cats every day, be curious and every day remember that you’re a student and not just this omniscient cat being.

AZA: What is the most fulfilling part of your work?

JG: All of it! I am so blessed to have found a way to bring my creative mind, my desire to educate, my love for people, my love for animals, my life as an animal activist, my life as an animal welfare worker — and to bring those all together every day of my life? I’m so lucky. I have tried to stay rooted in gratitude even in really challenging times because I still do what I love every single day.

JG: The most important thing to remember is that cats are not dogs. They have their own history and their own inner life that has nothing to do with us. They’re barely domesticated. Barely in their timeline have they learned how to live in a home. We expect too much compliance. We expect too much of them coming to our side of the fence in order to have a successful relationship. And the secret is? You’ve gotta meet them in the middle. Successful life with a cat is the embracing of compromise, which, if you think about it, is the secret to success in all of our relationships.

Our relationship with cats through 10,000 years was a mutually beneficial relationship. We were storing food. Rats and mice were fouling that food and making us sick. Cats killed the rats and mice, and we were like cool, this works. And that was it until maybe the last 150 years? It’s a blip! So embrace the fact you have an animal who straddles domestic and wild … embrace that!

Jackson Galaxy will be hosting virtual Cat Camp sessions that will be open to the public in the near future. Check out CatCamp.com for more info.

And find out more about Jackson’s endeavors, including how to follow him on social, at jacksongalaxy.com.

Next Up: The Top 8 Oldest Dogs Ever 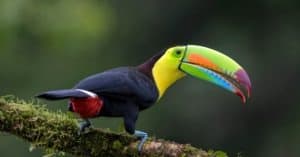