Felines are graceful, fast, and often deadly creatures that stalk and attack prey with great precision. Humans, in our questionable habit of bonding with wild animals, have managed to domesticate some of these cats. Although people have tried to tame large felines like tigers, we’ve had far more success with smaller cats that are less capable of hurting human beings. Over thousands of years, we have domesticated cats that now sit on our laps and eat canned food. So, what is the world’s largest domestic cat and how does it measure up to other cat breeds?

We’ll get to the bottom of this question and provide you with a lot of interesting information along the way!

What is a Domestic Cat?

Domestic cats are members of the Felis catus species, and they are usually referred to as the only domesticated cats in the world. Although many people value them for their companionship, domestic cats also provide valuable pest control by killing mice, rats, and others.

It’s believed that human beings and cats started living together almost 10,000 years ago in the Near East, the part of the world that is often referred to as the Fertile Crescent. Cats began to stay near human settlements for access to food like rats and mice. These pests were attracted by stored foods and other byproducts of human settlements.

At some point, humans started to see cats as companions, and the latter began to rely on humans for food and even shelter. Cats were revered in Ancient Egypt, traded in Greece and Rome, and eventually made their way as far north as Germany.

One of the most significant changes to domesticated cats in the last few decades has been their transition to pampered pets. In the past, cats were very utilitarian and free. They roamed outside for the most part and they earned their keep through pest control.

Now, domestic cats are incredibly common around the world, with an estimated population in the hundreds of millions. Cats are often kept indoors, given specific foods, and have regular health evaluations. This could increase cats’ overall life expectancy and could impact the size that they reach when fully grown.

What is the Average Size of a Domestic Cat?

The average cat weighs between 8lbs and 11lbs, stands 9.1in to 9.8in tall, and measures 18in long, not including its tail. They are rather small animals on average. However, they are great at pest control, and they are the right size for sitting on a human’s lap. Their average size is perfect for humans.

After all, felines are tremendous hunters. If cats were the size of domestic canines, they would not make great pets. In fact, they would probably pose a significant threat to humans, like a mountain lion.

The size of domestic cats can greatly vary. Some breeds are much larger than others. For example, the Norwegian Forest Cat, Ragdoll, and Maine Coon can double the size of small breeds like the Munchkin.

What is the World’s Largest Domestic Cat Breed?

The Maine Coon is often regarded as the world’s largest domestic cat breed. These animals regularly tip the scales at 20lbs and can stand 16 inches tall while achieving 40 inches in length with their tails. Due to their coloration and the tufts of hair resembling a lynx, these cats are often said to be a mix of raccoons and domestic cats. There’s no truth to that, though.

Another very large domestic cat breed is the Norwegian Forest Cat. This fluffy kitty can weigh up to 18lbs, stands 12 inches tall, and can measure around 40 inches long.

When it comes to the largest measured domestic cats, the Maine Coon and the Norwegian Forest cat are always near the top of the list along with Bengals and Savannahs. Now, let’s take a look at the size and breed of the cat that currently wears the crown as the largest domestic cat.

What is the World’s Largest Domestic Cat?

The world’s largest domestic cat is a Maine Coon named Barivel. To be clear, this cat holds the world record for being the largest domestic cat that is still alive. He is not the largest cat to ever exist. Currently, Barivel lives in Italy, and he’s recognized as the world’s longest cat measuring 3ft 11.2in. The cat probably weighs nearly 30lbs if it is anything like the previous record holders.

The largest domestic cat of all time was a Maine Coon named Stewie that lived in Reno, Nevada. He measured 4ft 0.5in long from nose to tail. His tail was 16.3in long. Other very large cats have come close to the measure of Barivel and Stewie. However, it’s difficult to have the cats’ sizes independently verified.

Interestingly, Barivel’s size may have increased since his last measurement. Barivel was still growing when he was awarded the record in 2018.

A Contender for the Largest Living Domestic Cat

Another feline might be making a run at supplanting Barivel as the largest domestic cat. The Maine Coon named Omar measures an estimated 120cm. If that measure is accurate, then Omar could rival or have grown larger than Barivel.

For context, Barivel measured 120cm or 3ft 11.2in when he was last measured. Omar was last measured several years ago, too. Since both cats were still relatively young at the time, Omar may have become the world’s largest cat.

Omar currently lives in Australia and supposedly ate raw kangaroo meat for dinner when he was younger. Interestingly, the owners of Barivel and Omar are rather active on social media. Perhaps new measurements of each cat will be taken in the near future and the matter can be settled.

Still, it seems clear that 4ft in length and 35lbs in weight are the upper limits of a cat’s size. Of course, a cat’s weight can always be inflated with a poor diet and lack of exercise, but the nose to tail length seems rather settled.

The Largest Forest in the United States 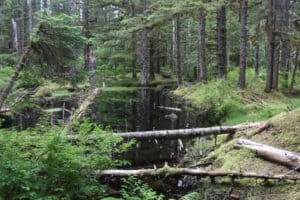