Live in dens in rocks and under ledges!

Click through all of our Lynx images in the gallery. 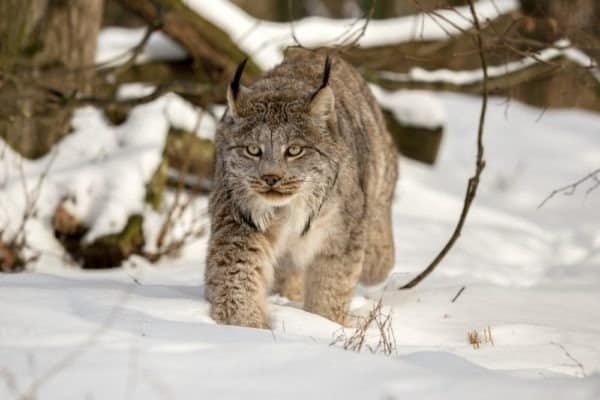 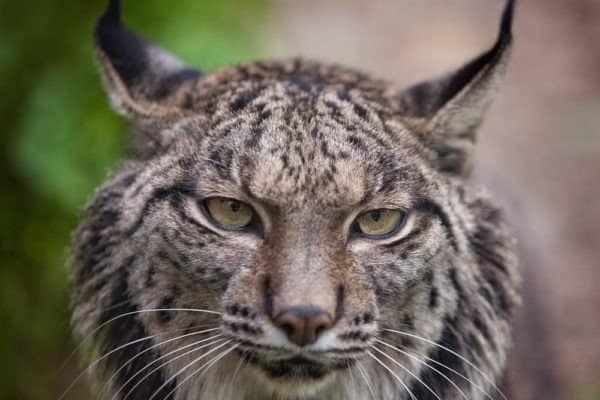 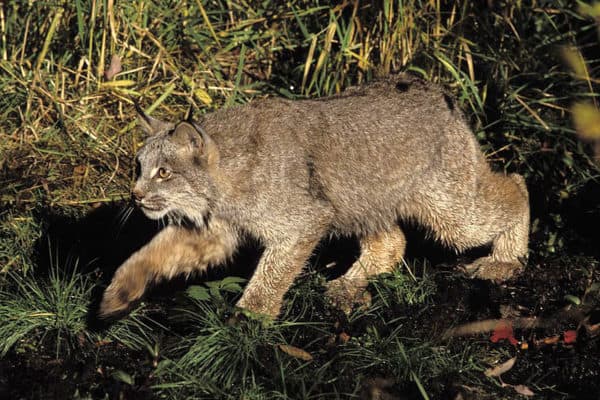 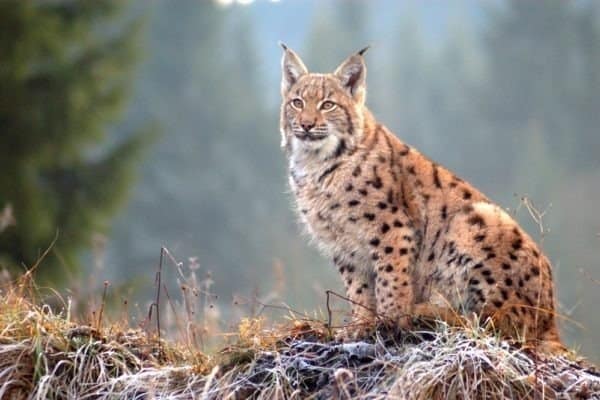 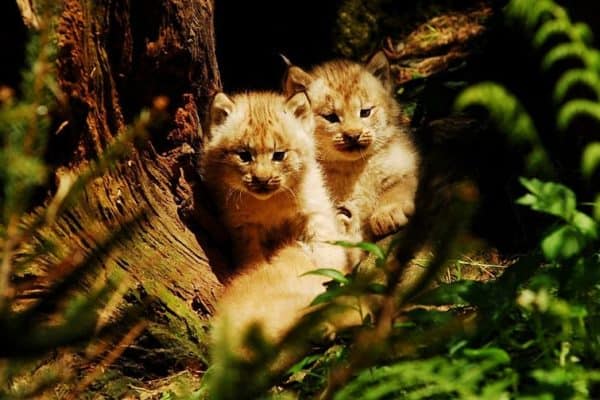 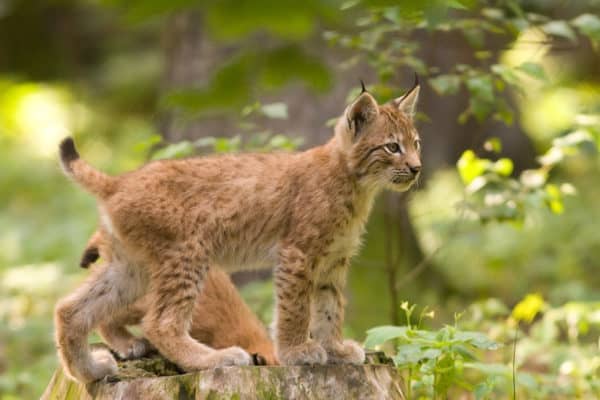 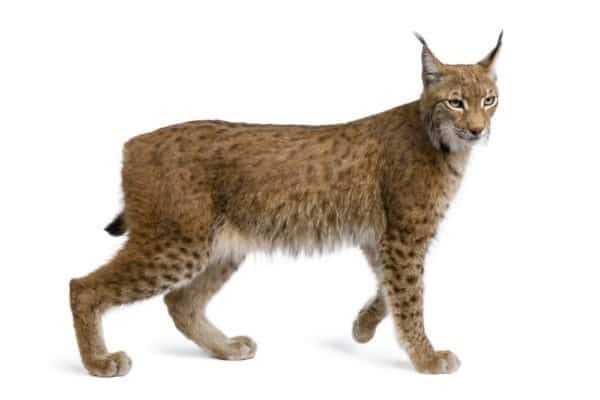 View all of the Lynx images!

As solitary and stealthy predators, the lynx is rarely seen by humans.

The Canada lynx is one of the biggest wild cats in North America, but other species of these cats also inhabit Europe and Asia. The lynx is easy to spot with its huge furry paws, stubby tail, and long ear tufts. The huge paws serve as natural snowshoes to help them navigate the snowy, cold forests and mountains it calls home.

Lynx refers to four species of stubby-tailed wild cats that live in the cold forests of North America, Europe, and Asia. All of these animals belong to the class Mammalia, the order Carnivora, the suborder Feliformia, the family Felidae, and the subfamily Felinae. The name lynx is part of the scientific name of each of the four species. It originates from an old Greek word that meant light or brightness. The term is thought to refer to the lynx’s bright, reflective eyes. The four species of these animals are as follows:

The most notable features of these cats are their huge paws, tufted ears, and stubby tail. The color of the animal varies depending on the species. The body color follows a gradient of medium brown to golden brown to as light as grayish-white. A furry ruff is found on all species. It’s usually marked with black bars that look like a bowtie, but it’s not always visible. All species have white fur on the undersides of their bodies.

Bobcats are technically part of the lynx species, but they look a bit different compared to the other three species. They typically do not have long ear tufts, and their paws aren’t as obviously large and padded due to their common habitat in warmer climes. The bobcat’s scientific name, rufus, alludes to its reddish-brown coloring, and it often has prominent black spots as well.

These cats are typically solitary animals. Rarely, small groups of these cats will travel together and hunt prey. They usually live in dens burrowed into ledges or rocky crevices. This is where they raise their kittens as well. A lynx won’t usually take its food back to its den unless it is a mother that needs to feed her kittens. These animals are very stealthy and good at avoiding human settlements, which is why they’re rarely seen.

Most species roam high-altitude forests that offer plenty of protection with dense shrubs, trees, and tall grass. Even though this wild cat generally hunts on the ground, it’s fully capable of climbing trees and swimming. The Eurasian lynx lives in central and northern Europe and over to India, northern Pakistan, and Iran near Mount Damavand. This species is most commonly found in northern European countries like Norway, Finland, and Sweden as well as most of Russia.

The Iberian lynx is far rarer and lives only in the southern parts of Spain. It used to live in eastern Portugal as well but became extinct there.

The Canada lynx mainly lives in Canada and Alaska but is also found in some northern US states like Washington, Montana and Maine. Its habitat is primarily boreal forests, which are also known as snow forests and consist largely of coniferous trees.

The bobcat ranges further than the Canada lynx. It is found in southern Canada, most of the continental United States, and as far south as northern Mexico. It lives in both forests and grasslands.

This animal is an opportunistic predator and can hunt a wide range of animals. It is a strict carnivore. The Canada lynx strongly prefers the snowshoe hare, and its population numbers fluctuate with the availability of the hare. However, it will also hunt fish, squirrels, rabbits, birds, grouse, turkey, and more. The larger Eurasian lynx often hunts larger animals such as deer, reindeer, and even elk.

These animals are primarily threatened by other predators larger than it as well as humans. The Eurasian lynx is one of the largest predators in Europe, with only the gray wolf and brown bear being larger. In North America, the cougar, gray wolf, and coyote pose threats to the lynx. Humans have often hunted lynx for their fur, but some species are now protected, depending on the region. The Eurasian and Canada lynx are most vulnerable to loss of habitat. Both are also dependent on prey numbers remaining healthy. The bobcat is the least endangered of all lynx species, and its numbers remain well into the hundreds of thousands despite being actively hunted by humans.

The Iberian lynx is the most threatened of these cat species. In 2004, only 100 animals lived in southern Spain. Thanks to conservation efforts by the Spanish government, they have somewhat recovered. As of 2014, over 300 animals were found in the same area.

The Eurasian lynx mates between January and April with the female having one oestrus period for four to seven days during this time. Males make deep growls to alert potential mates to their presence, while females make softer meow sounds. Pregnant females look for secret locations to build their nests, which are often in caves or dens. Gestation lasts between 67 and 74 days and usually results in two kittens. Three or more kittens in a litter are rare. These kittens are between 8.5 and 15.2 ounces. They are covered in grayish-brown fur and gain full adult color by 11 weeks. Their eyes open after about 10 days. They can eat solid food at around six weeks but are not fully weaned until at least five months. The mother lynx leaves the den at two or three months after birth, and the kittens accompany her until they reach 10 months.

The Canada lynx has a one-month mating season between March and April. Mating calls and marking with urine are typical matings behaviors. Gestation is between two and three months and the resulting litter can be one kitten or as many as eight. Litter sizes appear to vary depending on the availability of prey. The kittens weigh between 6.2 and 8.3 ounces and do not open their eyes for 14 days. These kittens also leave their mothers around 10 months.

The Iberian lynx litter is born between March and September after a two-month gestation period. The majority of births are in March and April. These kittens weigh between 7 and 8.8 ounces. By 10 months, the kittens are mostly independent, but many remain with the mother until about 20 months of age. They are known to get in violent fights with each other, which often leads to death. This starts to happen between 30 and 60 days of age.

Bobcats usually mate between February and March. A male bobcat will travel with one female and mate with her several times. The female bobcat will raise the kittens alone after birth. Bobcat litters generally consist of two to four kittens but can be as much as six. Gestation lasts 60 to 70 days, which usually results in an April or May birth. Bobcat kittens open their eyes around nine days and are weaned by two months. Between three and five months of age, they begin to leave the den and travel with the mother bobcat.

The Canada and Eurasian lynx and bobcat have a conservation status of least concern. The Iberian lynx is considered endangered. As of 2015, 400 Iberian lynx live on the Iberian peninsula. The United States population of bobcats is estimated to be several hundred thousand. The Eurasian lynx population is thought to be over 45,000 and is considered generally stable. The Canada lynx population is also stable and is thought to be in the tens of thousands.

Lynx In the Zoo – Where to Find the Animal

The Canada lynx and the bobcat are the most common of these cats in United States zoos. They are easily found in zoos all over the country, including the following:

The bobcat is a species of lynx, but its appearance is easily distinguishable from the Canada lynx, with which it shares some range. The bobcat typically has prominent black spots and tawny fur. Its fur is also less thick, and it doesn’t have long ear tufts or the huge paws of a Canada lynx. The bobcat is found in nearly any type of habitat and ranges over the entire United States and southern parts of Canada. The Canada lynx is mostly found in snow forests in Canada and parts of the northern U.S.

View all 30 animals that start with L

What is a lynx?

A lynx is a medium-sized wild cat that lives in North America, Russia, parts of Europe, and parts of Asia.

How fast does a lynx run?

Where do lynx live?

The Canada lynx lives primarily in Canada, Alaska, and some parts of the northern United States. The bobcat can be found in every part of the United States as well as southern Canada and most of Mexico. The Iberian lynx is only found in southern Spain. The Eurasian lynx lives in Russia, Scandinavia, parts of Europe, parts of Turkey, and northern areas of China and Tibet.

What do lynx eat?

The lynx eats deer, rabbits, rodents, sheep, squirrels, ground birds, other birds, goats, reptiles, and fish. The Canada lynx strongly prefers snowshoe hare, while other species are more opportunistic and will eat whatever is in their habitat.

Can you have a lynx as a pet?

Most states in the United States declare that it is illegal to own any species of lynx. However, Alabama, Nevada, North Carolina, South Carolina, and Wisconsin allow bobcats to be kept as pets.

Is a lynx dangerous/can it kill you?

A lynx will defend itself if cornered, but there are no recorded instances of unprovoked attacks on humans. A large lynx could, in theory, kill a human.

A lynx is an opportunistic predator, and domestic cats are well within the size of prey it normally eats.

What Kingdom do Lynx belong to?

Lynx belong to the Kingdom Animalia.

What class do Lynx belong to?

Lynx belong to the class Mammalia.

What phylum to Lynx belong to?

Lynx belong to the phylum Chordata.

What family do Lynx belong to?

Lynx belong to the family Felidae.

What order do Lynx belong to?

Lynx belong to the order Carnivora.

What type of covering do Lynx have?

Lynx are covered in Fur.

What genus do Lynx belong to?

Lynx belong to the genus Lynx.

What are some predators of Lynx?

Predators of Lynx include wolves, coyotes, humans, and cougars.

How many babies do Lynx have?

The average number of babies a Lynx has is 4.

What is an interesting fact about Lynx?

Lynx live in dens in rocks and under ledges!

What is the scientific name for the Lynx?

The scientific name for the Lynx is Felis lynx.

What is the lifespan of a Lynx?