Written by Heather Hall
Updated: September 22, 2022
© A-Z-Animals.com
Share this post on:
More Great Content:
Ahi Tuna vs Yellowfin Tuna: What are…
Skipjack Tuna vs Albacore Tuna: 6 Key…
The Largest Bluefin Tuna Ever Caught
What Do Tuna Eat? Their Diet Explained
Bluefin vs Yellowfin Tuna: What are the…
Bigeye Tuna vs Bluefin Tuna: The Key…
↓ Continue Reading To See This Amazing Video

Tuna and salmon aren’t the same kinds of fish, but one tends to come up in a conversation about the other. Many people have opinions on both whether they’re prepared from fresh, canned, or frozen states and farmed or wild-caught fish, and they’re widely available. Both are rich in protein, fatty acids, potassium, sodium, and other nutrients. They are both carnivorous, fatty fish with a strong flavor and firm texture. At the supermarket, the fishing spot, the dinner table, or for dietary needs, though, it helps to be able to know which is tuna and which is salmon. It turns out you can tell them apart in both appearance and flavor, and there are unique recipes for each in addition to one being a substitute for the other. Let’s explore Tuna vs Salmon below!

The 6 Key Differences Between Tuna and Salmon:

Tuna and salmon overlap in the Atlantic ocean. But tuna is found in tropical and temperate salt waters around the world, and salmon inhabits both salt and fresh water in the Atlantic and Pacific oceans. Tuna is more common, but salmon is more popular for recreational fishing.

In a comparison of Tuna vs Salmon, it’s fairly easy to tell the two fish apart. The tuna has a sleek, round body compared to the long, slender body salmon have. Tuna has a round head instead of the salmon’s angled one, and many spots instead of few or none at all. It has a crescent-shaped tail rather than a forked one and tends to be longer and heavier than salmon.

In the United States, twice as much tuna is sold as salmon. 5 out of 8 species are most important for recreational and commercial fishing: Skipjack, yellowfin, bigeye, albacore, and bluefin. Salmon is considered a delicacy and therefore commands a higher price in any form, while 6 out of 7 species are most important for commerce: Chinook (King), Coho (silver), pink (humpback), red (sockeye), salmo salar (Atlantic), silverbrite (chum or dog) salmon.

Tuna is higher up on the food chain and consumes smaller fish that are contaminated with mercury and other heavy metals, so limiting tuna intake due to concerns about mercury is sensible. There are some important differences in nutrients, though, especially if you’re seeking to fulfill certain dietary needs. Tuna is a leaner source of protein, containing more protein and being lower in calories, fat, and cholesterol. Salmon has more omega-3 fatty acids, important antioxidants which neutralize free radicals. It is high in vitamin D and vitamin B12 and because of its soft, digestible bones, is also a good source of calcium.

The nutritional differences are very evident in the unique flavor of each fish. Tuna is a lean protein with higher iron and has a coppery, meaty, oily taste with dark meat that turns dark pink when cooked. Salmon is a fattier fish with an oily, moister, richer taste with orange or pink meat that turns pale pink or whitish when cooked.

Is tuna the same as salmon?

No, they are different fish in terms of habitat, appearance, taxonomy, nutrition, taste, and price.

What has more protein tuna or salmon?

Tuna has more protein at 68mg per 100g serving size, compared to the salmon at 58g.

Which is better canned tuna or salmon?

Canned salmon is considered better than canned tuna. Although salmon has a higher price, it eats lower on the food chain so it doesn’t have as much mercury and other heavy metals. It contains the same amount of omega-3 fatty acids if not greater than tuna. Plus, its taste is moister and fattier.

Which is higher in iron tuna or salmon?

Tuna has more iron at 1.02mg per 100g serving size, whereas salmon has 0.34mg. The higher iron content is obvious in its taste. 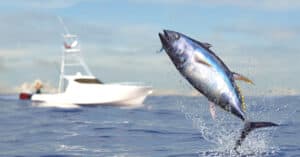 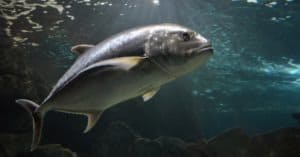 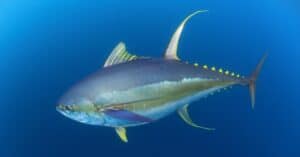 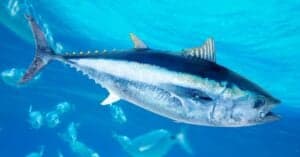 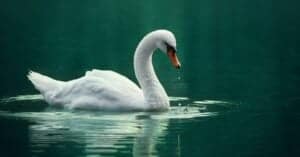