May eat squid or other small invertebrate ocean life

Click through all of our Bonito Fish images in the gallery. 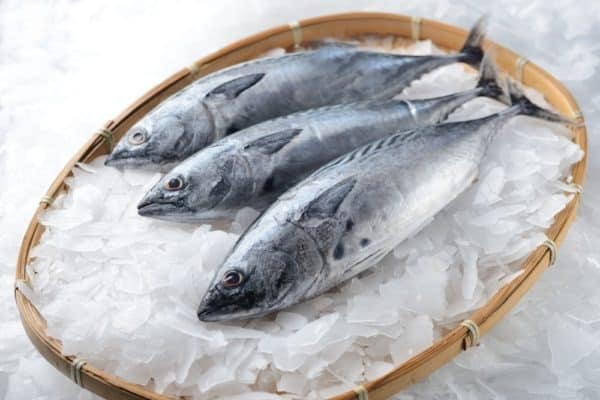 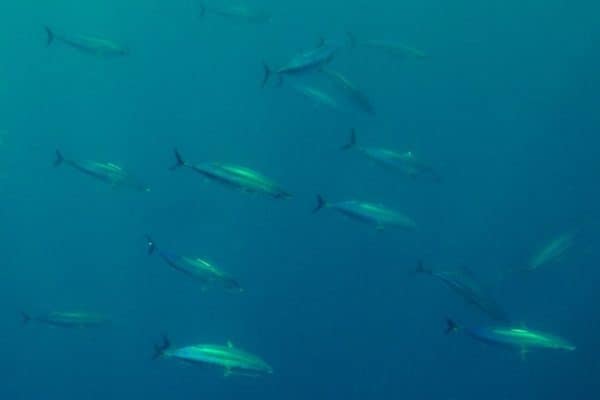 View all of the Bonito Fish images!

The Bonito fish is a medium size, predatory fish.

Bonito Fish have stripes on their back with a silver underside. There are four different species of Bonito Fish that can be found across the globe.

These fish are popular with both commercial and sport fishermen. They are also used as bait to catch larger fish.

There are four main species of Bonito Fish that are most commonly recognized. They are the Atlantic Bonito, the Pacific Bonito, the Indo-Pacific Bonito, and the Australian Bonito. The scientific names for these species are Sarda Sarda, Sarda Chiliensis, Sarda Orientalis, and Sarda Australis, respectively. The term Sarda refers to the genus that Bonita Fish belongs to. The second word in the scientific name for each species refers to the area where the Bonito Fish can be found.

These fish belong to the Scombridae family. There are 51 species in this family. Some of the other fish in this family include tuna, mackerel, and butterfly king fish. Bonito Fish are part of the Actinopterygii class.

These fish can grow to be up to 30 inches long. They have a more streamlined body that is similar to that of a tuna. Their backs are blue with longitudinal stripes, and their undersides are silver. A Bonito Fish’s tail is forked with a narrow base.

The four different species are spread out in different areas of the globe. Pacific Bonitos can be found between Chile and the Gulf of Alaska, though most are located in warmer areas near southern California and Mexico.

Atlantic Bonito Fish are found between Norway and South Africa. They can also be found in the Black Sea, Mediterranean Sea, and the northern Gulf of Mexico. Australian Bonitos are found in temperate areas near New Zealand and Australia. The Indo-Pacific Bonito’s range extends from the Gulf of California to Peru. They can also be found near the Oceanic Islands, with the exception of Clipperton.

These fish choose different areas for their habitats. Some can be found in more open water areas, whereas others frequent kelp forests that are closer to the shoreline. In general, younger fish are more common to be found closer to the shore. They may also swim into bays or harbors. Larger adult Bonitos may swim up to 300 feet below the surface.

There is not a lot of information about the total population of these fish or each individual species, but the fish is not considered to be threatened. They have a conservation status of least concern according to the International Union for Conservation of Nature.

Humans also hunt Bonito Fish. They are hunted both for sport as well as commercially.

What Do Bonito Fish Eat?

Bonitos are predatory fish who eat other smaller fish and sea creatures. Some of their favorite foods include anchovies, squid, sardines, herring, mackerels, and shrimp. The diet of a Bonito will vary for the different species based on the other sea life that lives in the same area where they live. However, all Bonito Fish are predatory, carnivorous hunters.

These fish reach sexual maturity around the age of two. The time of the year when spawning occurs varies by season. For example, Atlantic Bonitos typically spawn during the summer, while Pacific Bonitos spawn between the end of January and May.

Bonitos are broadcast spawners. This means that they release the sperm and eggs (also known as gametes) into the water where they will be fertilized. After the eggs are released, neither the male or female does anything to watch over the eggs or care for the young. Approximately three days after being released, the eggs will hatch.

Bonito in Fishing and Cooking

These fish are fished both recreationally and commercially. Some people catch smaller Bonitos to use as bait for larger fish, such as mackerel. Additionally, people often share that catching a Bonito is good practice for tackles fishing. While these fish are caught all year long, more are around during the spring or summer.

These fish are sometimes used in cooking, but many people find that they have too strong of a flavor combined with an unpleasant oily texture. The meat of a Bonito is dark red.

If you would like to try these fish, here are a few recipes you can try.

View all 93 animals that start with B

Where are Bonito found?

The four species of Bonito Fish are found all over the world in the Atlantic Ocean, Pacific Ocean, and near Australia and New Zealand.

What is a Bonito Fish

A Bonito Fish is a predatory, carnivorous fish. They can grow to be up to 30 inches long and have a blue striped back with a silver belly.

Can you eat Bonito Fish

Yes, you can eat Bonito Fish, though some believe it is too oily and has a very strong flavor.

Is Bonito high in mercury?

As a predatory fish that prey on other fish in the ocean, Bonito Fish can contain higher levels of mercury than other fish. You will want to be careful to list the total amount that you consume.

How big do Bonito Fish get?

Bonito Fish can grow to be up to 30 inches long. They can weigh up to 25 pounds.

Bonito Fish are Carnivores, meaning they eat other animals.

What Kingdom do Bonito Fish belong to?

What phylum do Bonito Fish belong to?

What class do Bonito Fish belong to?

What family do Bonito Fish belong to?

What order to Bonito Fish belong to?

What type of covering do Bonito Fish have?

Bonito Fish are covered in Scales.

What are some predators of Bonito Fish?

What is the scientific name for the Bonito Fish?

The scientific name for the Bonito Fish is Sarda.

What is the lifespan of a Bonito Fish?

Bonito Fish can live for 6 to 8 years.

What is a distinguishing feature of the Bonito Fish?

How many species of Bonito Fish are there?

What is a distinguishing feature of the Bonito Fish?

Bonito Fish have a tuna-like appearance with stripes and varying coloration.

How many species of Bonito Fish are there?

What is the biggest threat to the Bonito Fish?

The biggest threat to Bonito Fish is overfishing for consumption.

What is another name for the Bonito Fish?

How many Bonito Fish are left in the world?

The population size of the Bonito Fish is unknown due to frequent migration patterns.

What is an interesting fact about Bonito Fish?

How fast is a Bonito Fish?

A Bonito Fish can travel at speeds of up to 40 miles per hour.