Written by AZ Animals Staff
Published: November 6, 2021
Share this post on:
More Great Content:
The 10 Largest Crabs in the World
Crayfish vs Lobster: 5 Key Differences Explained
What Do Crabs Eat?
Discover the Largest Lobster Ever Caught!
Discover the Largest King Crab Ever
Hermit Crab Lifespan: How Long Do Hermit…

To many people around the world, crayfish (also called crawfish or crawdad) is food. It is Louisiana‘s official state crustacean. But what does the food eat? Crayfish are freshwater crustaceans that look like small lobsters and even taste like lobster but are small like shrimp, with fattier tail meat than shrimp, and with fat stored in the head. And unlike the treatment of lobsters as a delicacy, crayfish are often used in home cooking. Let’s explore together what these so-called freshwater lobsters, rock lobsters, or mountain lobsters eat.

The crawdad or crawfish diet is omnivorous, that is, they eat both plant and animal matter. Their habitat in the wild is flowing streams such as in a river or brook, but sometimes also in a pond, swamp, or ditch. Flowing rather than stagnant water allows them to reach their food easily. What they eat is anything that can float by them or sink to the bottom. That includes decaying vegetation and aquatic creatures such as rotten leaves, dead fish, algae, plankton, and twigs. But they can also be hunters and eat small worms, snails, eggs, larvae, insects, shrimps, fish, tadpoles, baby turtles, frogs, and even their own baby crayfish. Baby crayfish eat mostly algae. The crayfish diet in the wild is similar to that in a pond, but people who farm crayfish in ponds also feed them prepared vegetables and commercial food.

The crawfish or crawdad is a decomposer as well as a detritivore, but it’s also a filter-feeder than takes in what’s suspended in water while already whole or in pieces. It must therefore have a unique digestive system that allows them to break down what they eat. The first organ is a two-part stomach. The cardiac stomach stores food and mechanically breaks it down with teeth, while the pyloric stomach chemically breaks it down, similar to the stomachs of vertebrates such as humans. There’s also a digestive gland, similar to a liver, and the intestine, which absorbs nutrients and excretes waste from the anus.

Foods That Are Bad or Toxic for Crayfish

Crayfish, crawfish, or crawdads are a staple shellfish around the world and are the focus of certain spicy country cuisines, where they taste similar to and cook the same as lobster. These freshwater crustaceans lack a seawater flavor, unlike their saltwater counterparts, but they are likewise omnivorous. They are so savory and delicious because they eat a protein-rich diet.

Next Up: 7 Birds With Long Necks 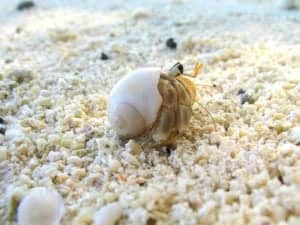