The hippopotamus is a semi-aquatic hoofed mammal – native to parts of sub-Saharan Africa – that spends most of the day either partially submerged in rivers and lakes or foraging for food nearby. It ranks third, behind only the rhino and elephant, as the largest land mammal still living today. As a result, it needs to consume vast quantities of food to stay alive.

There are only two remaining species of hippos in the world: the common hippo and the pygmy hippo. Unless otherwise mentioned, this article will only cover the common hippo. The pygmy hippo is similar enough in its diet and behavior that it shouldn’t warrant any additional explanations.

What Does the Hippopotamus Eat?

The hippopotamus consumes a mostly herbivorous diet in the wild. Grasses, supplemented with nutrient-rich fruits, seem to make up the great majority of their food consumption; they also enjoy small shoots and reeds emerging from the ground, but aquatic plants seem to form a surprisingly small percentage of their diet. Pygmy hippos, by contrast, eat a higher proportion of leaves and roots than grasses. On very rare occasions, common hippos have been observed eating dead animals, but there’s some debate about how often this actually occurs in the wild.

Traditionally, it was argued that the hippo scavenges for meat only during exceptional times of food scarcity, because their stomachs are not adapted for meat consumption. However, one scientific study from 2015 argues that the hippo is not just limited to scavenging carcasses; this carnivorous behavior is actually part of a much larger pattern of meat-eating. The hippo has been known to attack and consume other animals and even steal meat from predators; wildebeests, zebras, and kudus seem to be among their more common kills. They’ve even been seen engaging in cases of cannibalism with members of the same species. The paper argues that hippo’s digestive system is not a barrier for eating meat, as it’s been traditionally assumed, and cases of carnivorous behavior are underreported because it’s difficult to observe them eating at night.

The common hippo (if not necessarily the pygmy hippo) is certainly large and aggressive enough to take down just about any other animal (even the most fearsome predator would give up its meal if it saw a charging hippo), but hunting requires a lot of energy expenditure, which the hippo tries to avoid. If the study is correct, then this probably means that the hippo takes advantage of opportunities to kill other animals when they arise but doesn’t go out of its way to hunt. It’s difficult to say for certain either way without further investigation.

Regardless of their exact dietary composition, it’s estimated that they consume around 1% or more of their body weight each day. Since the common hippo can easily weigh anywhere between 2,800 to nearly 10,000 pounds, this can amount to approximately 30 to 150 pounds of food, which sometimes leaves entire areas bereft of grass and shoots. In order to prevent any unnecessary energy expenditure, the hippo is a sedentary animal, wallowing for most of the day in the water or mud without moving much at all. Surprisingly, for a semi-aquatic animal, the hippo cannot swim or even float. Their bodies are simply too heavy. Instead, they seem to walk or stand on the bottom of the water bed.

What Do Hippos Eat in Zoos vs. in the Wild?

Compared to its wild diet, captive hippos in zoos eat a larger range of foods, carefully selected and provided by the trainers and staff. For example, the San Diego Zoo feeds their hippos a combination of herbivore pellets, alfalfa and Bermuda hay, lettuce and other mixed vegetables, and the occasional melon. Pygmy hippos will also consume a combination of high-fiber pellet, hay, and greens in most zoos.

How Does the Hippopotamus Eat Its Food?

The hippopotamus is a nocturnal feeder. It leaves the water with the coming dusk and settles in a grassy area near the waterbed, arriving via the same foraging path every day. These are known as “hippo paths,” and their grazing areas are called “hippo lawns.” Both areas are often unique to each group or individual. If food is particularly scarce, then it may end up traveling a few miles away from the water hole, but they prefer to stay as close to the sleeping area as possible. The superb sense of smell helps them find edible food wherever it might be located. They’re also adept enough to hear the sound of falling fruit nearby.

When grazing, the hippo’s highly muscular lips enable them to pull up food from the ground or tear off leaves from a plant. The hippo will actually soften up the food in its mouth without chewing to prevent any nutrient loss. While they do have incisor and canine teeth, these actually appear to play a minimal role in feeding, except in the cases where it eats meat; the teeth are instead adapted for self-defense. Its grazing time lasts about six hours each night. Once it’s done, the hippo will return to its water hole just before dawn.

The hippo is well-adapted for an herbivorous diet. Their highly complex stomachs, divided into three distinct chambers, are specialized for digesting plant matter, but unlike cattle, they do not regurgitate and chew the cud. All hippos are born with relatively sterile intestines and obtain bacteria from their mother’s feces. These bacteria settle in the intestines and help them break down complex plant material into smaller nutrients.

A Complete List of the Top 5 Foods the Hippopotamus Eats

Hippos are very reliant on only a small number of food sources. They very rarely eat anything else outside of their normal feeding behavior. These five food sources appear to be shared by almost all hippos:

Next Up: What Do Cockroaches Eat?

Discover the Largest Terrier Ever (It Weighed Over 100 Pounds!) 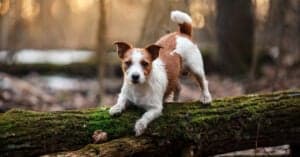