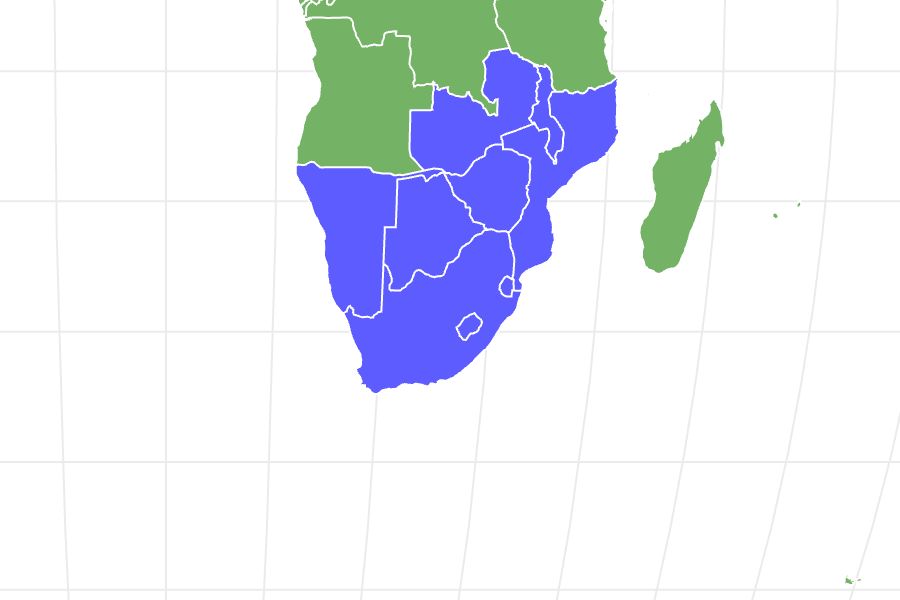 View all of our Wildebeest pictures in the gallery.

View all of the Wildebeest images!

A wildebeest is a version of an antelope. They have horns whether they are male or female. While they are territorial, they are also known for being playful, energetic and active. Of all the antelopes in Africa, the wildebeest population has grown from 250,000 alive in 1960, and 1.5 million as of 2020.

While the common name for this animal is the Blue Wildebeest, its scientific name is Connochaetes taurinus. It is also referred to as a gnu (pronounced ‘g-new’). The class of animals it falls under is Mammalia and the family is called Bovidae. Its subfamily is Alcelaphinae. Though there are five subspecies of this animal, only two of its species still exist. The subspecies are albojubatus, cooksoni, johnstoni, mearnsi, and tauinus. The most common type of this animal is the Blue Wildebeest, who is related to the Black Wildebeest.

In African countries, the animal known as gnu was given the nickname of Wildebeest. In English, this translates to wild beast. In England in 1823, a naturalist named William John Burchell was the world’s first to give a description to the Blue Wildebeest. The wildebeest’s scientific name was formed using two Greek words that help describe the animal’s physical appearance.

The Wildebeest is not properly proportioned. The animal has a heavy front end but its hindquarters and legs are skinny. The wildebeest has a head shaped like a rectangle, and broad shoulders. Its large muzzle matches the wideness of its forequarters, which include big muscles.

Not every wildebeest is the same color. Some have a light gray brush while others are a color closer to blue-gray. The darkest wildebeests are a gray-brown color. On their shoulders are dark brown stripes that cross their body vertically. Wildebeest have a black mane, which is thick and long. They have a long beard on their neck, which can be dark or pale.

Wildebeests are animals that also have horns that curl away from their head. A male wildebeest has horns that are twice the size of a female wildebeest. For male wildebeest, the horns are 33 inches (half the height of the average refrigerator) and the female’s horns are anywhere from 12 to 16 inches (or 30 times longer than an aspirin pill.) Their horns base will more rough as they age.

The blue wildebeest typically grows to a height of 4 1/2 feet, or 3 1/2 times taller than a bowling pin. They can also weigh as much as 600 pounds or roughly half the weight of a polar bear. They travel in herds of at least 1,000 when they travel for migration purposes.

Their habitat is one that Wildebeest roam freely while living near each other. They are very protective of their territory. It is not unusual for 270 of them to live in areas measuring one square kilometer.

Sometimes herds will stay in their territory while others will constantly be moving. However, every wildebeest rests at nighttime or when the air temperature is hot. The times of day they are the most active are all morning and into the early hours of the afternoon.

Approximately 50% of a wildebeest’s life is spent resting. 33% of their life is dedicated to grazing and 12% of it is spent interacting with other wildebeest.

Wildebeest make their home in woodlands and grassy plains. They mostly live in various parts of Eastern Africa. This includes Kenya and Serengeti, Tazmania. In the southern part of Africa, Wildebeest live close to the South African Orange River. This animal prefers to live in the savannahs of Acacia. The grass grows quickly due to the moisture of the soil and is great for finding abundant grass to eat while grazing.

Though wildebeest normally live with each other, they are also known to temporarily live with the zebras they encounter in the plains. This is because zebras will eat away the top layer of grass so that the wildebeest can get to what is underneath.

Due to their diet, wildebeest are always traveling. They constantly look for water (which they drink twice per day) and grass. When the weather is dry they graze on fresh grass and then travel back home before the rainy season begins. At the end of the rainy season, they return to the area and graze again. Because the wildebeest has a wide mouth they are able to eat a lot of grass very quickly. When grass isn’t freely growing, they search for shrubs and trees to eat.

Wildebeest are the most vulnerable to larger carnivores including:

The larger a wildebeest is the more vulnerable it is to its prey. To protect themselves, a group of wildebeest will come together and begin stomping the ground. They also let out loud calls to make sure the herd knows they are in danger.

Something else that threatens wildebeest is the fragmentation of their habitat. This happens if the grass they graze on is suddenly blocked with a fence. As agriculture and civilization continue to expand, and water sources continue to decline in certain areas, the lives of the world’s wildebeest are being increasingly put at risk. As one example there are no longer and Wildebeest living in Malawi. Fortunately in Namibia, their population is rising.

Despite some of these challenges, they are not at risk enough to be considered endangered. While the Serengeti has seen an increasing number of wildebeest in recent years, they have been slowly disappearing from other parts of the world. This is partly because they are competing with livestock for their necessities. Wildebeest are known for destroying the crops they find. As a result, farmers will often kill them and put up fencing to keep more from coming in. The only way wildebeest will be able to avoid extinction is through conservation efforts.

When a male wildebeest is three or four years old they are ready to mate with females. To attract a female they secrete and expel feces into their territory. If a male tries to enter their territory the wildebeest will fight for it. If a female enters, he will try to mate with her. Female wildebeest are pregnant for 8 1/2 months before giving birth. The mating season is timed so that baby wildebeest are born during the rainy months of February and March. Of all pregnant wildebeest, 80% give birth to their babies over the span of two to three weeks, just in time for plenty of grass to be available to them. While similar animals give birth alone, a wildebeest may give birth with her herd surrounding her. Baby wildebeest are referred to as calves.

Once baby wildebeest are born it only takes a few minutes before they can stand up and run. They stay close to their mothers to avoid being eaten by animals such as hyenas, lions, cheetahs, and even wild dogs. For the first six months of his or her life, a baby wildebeest gets milk from its mother. When they reach 10 days old they can begin eating grass. As soon as a male wildebeest is one year old they are able to go off on their own. They then find other wildebeest to form a group with.

In the case of blue variety wildebeest, the males become ready to breed when they reach two years of age. Most female blue wildebeest can begin breeding after they have turned 16 months old when they have been properly nourished during their young life.

Since they eat newly grown grass, the rate of success when mating is around 95%. It has been proven that the lunar cycle also has an effect on their breeding cycle. On nights with a full moon, males have a very high testosterone level. This means that their mating call is much stronger than it would be otherwise. Since males are more motivated to breed, females become the same way.

The average lifespan of female and male wildebeest means they will survive for 20 years. The oldest record age of any wildebeest is 40 years.

As many as 500,000 wildebeest are born between February and March each year. This is when the rainy season begins in its natural habitat.

As of 2018, the African population of wildebeest was approximately 1,550,000. They are continually being born at the Serengeti National Park, which is in Tanzania. Due to the growing number of wildebeest, the International Union for Conservation of Nature has the status of both the blue and black wildebeest as Least Concern (LC).

How Far Do Wildebeest Migrate?

When wildebeest get together to migrate, they take an 1800 mile journey.

Why Do Wildebeest Migrate?

Wildebeest looks like aggressive animals. Yet, they are ordinarily docile. They are only aggressive when they are in their breeding season. Males will chase other males away so they can get the female.

A Wildebeest is called its name because in Dutch it means a wild beast, and in Africa, it means wild cow. This is why baby wildebeest are called calves.

It is very rare for a wildebeest to attack a human being. They only attack if they are held in captivity and a human comes into their territory.

What Are Wildebeest Good For?

Wildebeest are a vital species in a complicated web of life that includes plants, animals, predators, and prey. Their dung acts as fertilizer for the wide ranging areas they migrate. They also act as an important food source for carnivores like lions and hyenas. Wildebeest hide can be used for leather, and the meat is considered a delicacy in parts of Africa.

Can You Eat A Wildebeest?

In certain parts of Africa, people do eat wildebeest. They are included in a stew called bitlong. They are tough meat that has been compared to Elk.

Are Wildebeest herbivores, carnivores, or omnivores?

What Kingdom do Wildebeest belong to?

Wildebeest belong to the Kingdom Animalia.

What phylum do Wildebeest belong to?

Wildebeest belong to the phylum Chordata.

What class do Wildebeest belong to?

Wildebeest belong to the class Mammalia.

What family do Wildebeest belong to?

Wildebeest belong to the family Bovidae.

What order do Wildebeest belong to?

Wildebeest belong to the order Artiodactyla.

What genus do Wildebeest belong to?

Wildebeest belong to the genus Connochaetes.

What type of covering do Wildebeest have?

Wildebeest are covered in Hair.

In what type of habitat do Wildebeest live?

What do Wildebeest eat?

What are some predators of Wildebeest?

Predators of Wildebeest include lions, cheetahs, and crocodiles.

What is the average litter size for a Wildebeest?

The average litter size for a Wildebeest is 1.

What is an interesting fact about Wildebeest?

Wildebeest can trek more than 1,000 miles every year!

What is the scientific name for the Wildebeest?

The scientific name for the Wildebeest is Connochaetes Taurinus.

What is the lifespan of a Wildebeest?

Wildebeests can live for 15 to 20 years.

How fast is a Wildebeest?

A Wildebeest can travel at speeds of up to 38 miles per hour.