What Do Sidewinder Rattlesnakes Eat?

The sidewinder rattlesnake is uniquely adapted to live in the hot and dry deserts of the southwestern United States and northwestern Mexico. Like all snakes, sidewinders are cold-blooded and use the sun to stay warm and regulate their body temperatures. However, in these blistering desert environments, snakes can easily overheat. How do these snakes survive in such a hot and unforgiving habitat? How do they hunt in the desert? What do sidewinder rattlesnakes eat?

The Unique Adaptations of the Sidewinder Rattlesnake

The sidewinder rattlesnake has developed a unique method of locomotion to safely move across the scorching desert sand. Rather than leading with its head, the snake throws the center of its body forward to take the lead, followed by the tail and head. This way the snake only has two small sections of its body briefly touch the hot sand at any one time, preventing burns and overheating.

The sidewinder appears to hover and quickly travel in a diagonal path, leaving very distinctive impressions in the sand behind in a series of parallel “J”-shaped makings. The sidewinder rattlesnake can move across loose bodies of hot sand quickly and efficiently, up to 18 miles per hour!

What Do Sidewinder Rattlesnakes Eat?

Sidewinder rattlesnakes are carnivores and hunt all kinds of desert animals. These snakes eat small mammals like mice and gophers. Sidewinders in Arizona seem to be particularly fond of eating kangaroo rats, although these are challenging to catch and are quick to evade capture. Sidewinder rattlesnakes also eat smaller snakes and lizards, and occasionally they may eat small birds as well.

What does the Sidewinder Rattlesnake eat in the spring and summer?

During the warmer summer months, sidewinder rattlesnakes prefer to stay out of the heat of the day. They are more active at night, especially in the early mornings and late evenings when the air is cooler. During the summer they primarily eat mammals.

What does the Sidewinder Rattlesnake eat in the fall and winter?

When the weather is cooler in the fall and winter, sidewinder rattlesnakes sleep at night and hunt during the day, and they primarily eat lizards. In some areas sidewinders will also brumate through the winter in rodent and tortoise burrows.

Who competes with Sidewinder Rattlesnakes for food?

Sidewinder rattlesnakes do not have a lot of competition when it comes to hunting for food. These snakes live in extremely hot and dry deserts where few other animals wish to be. In addition, sidewinder rattlesnakes are solitary, shy, and travel over large ranges, allowing them to find food in many different areas of the desert. They do have to watch out for predators, however, like kingsnakes, shrikes, crows, hawks, racoons, and coyotes.

How does the Sidewinder Rattlesnake hunt?

The sidewinder rattlesnake is a carnivore and an ambush predator. This snake often hides under desert vegetation, or partially buries its body underneath the sand while it waits for potential prey to pass by. The snake’s coloring and texture help it to camouflage within the loose sand, making it nearly invisible. Sidewinders are pit vipers with heat-sensing pit organs on their face that look like a second pair of nostrils. Their pit organs help them to locate food by sensing the heat radiating from other desert animals. This way, they can escape the heat of the sun and simultaneously keep track of any dinner items that may come their way.

When an animal passes by the snake’s hiding place, the sidewinder rattlesnake springs into action. It pounces on its prey and bites the animal with hollow, retractable fangs that inject a toxic venom. The animal will quickly tire and succumb to paralysis and death, at which point the snake swallows it whole. The venom of the sidewinder rattlesnake is a mix of hemotoxins and neurotoxins that affects both the blood and neurological systems of the body. However, the venom composition of each subspecies of sidewinder varies to some degree.

What do baby Sidewinder Rattlesnakes eat?

Baby and juvenile sidewinders are smaller and tend to hunt lizards more than mammals. They bury their bodies in the sand like adult snakes, but with the tip of their black-banded tails exposed. While hiding under the sand, the juvenile sidewinder rattlesnake twitches the tip of its tail as a lure to tempt lizards to come closer.

How much does the Sidewinder Rattlesnake eat?

Sidewinder rattlesnakes typically only eat one prey item at a time. After killing an animal, they swallow it whole. For the next 5-10 days, the sidewinder will take cover and rest while it digests its meal.

Is the Sidewinder Rattlesnake dangerous to humans?

Sidewinder rattlesnakes are dangerous pit vipers with very toxic venom. Although they do not actively attack humans, they will defend themselves by coiling up around their bodies, vibrating their rattles loudly in warning, and biting if necessary. Sidewinder rattlesnakes have smaller venom glands with less potent venom, so they are not as deadly as many other rattlesnake species.

Where do Sidewinder Rattlesnakes live?

These snakes live in very dry, very hot desert environments, often with sparse vegetation. They may be found in less-open areas with thicker vegetation if there are plenty of rodent burrows for shelter. Sidewinder rattlesnakes commonly live in sand dunes, desolate canyons, desert plains and some rocky desert regions.

The body of the sidewinder rattlesnake is perfectly adapted for blending into its sandy desert environment. The colors of its body provide excellent camouflage, and each snake may have a different color depending on where it lives. In fact, sidewinders utilize metachrosis, which means they can even change color depending on the season! The snake’s scales become lighter in color during the summer to help them stay cool. In the winter, the scales darken to help the snake to better absorb rays from the sun for warmth.

Sidewinder snakes can be tan, sandy-colored, cream, grey, brown, green, or pink. They have dark geometrical patterns or blotches running along the length of their bodies, with smaller spots along their sides. Dark bands mark the end of their tails, and they also have a dark line running behind each eye along the side of the head.

The “horned” snake of the desert

The “horned” scales are one of the most iconic features of the sidewinder rattlesnake. A series of uplifted scales come together above each eye to create an extended, horn-like shape, which is why these snakes are often called “Horned Rattlesnakes.” These protruding scales help shade the snake’s eyes and prevent dust and sand from bothering the snake. Sidewinder snakes have a broad and flat head that is much larger than their necks, giving them a unique and intimidating appearance with their horn-like eyes. 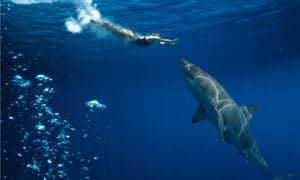