They dig large networks of tunnels!

Click through all of our Gopher images in the gallery. 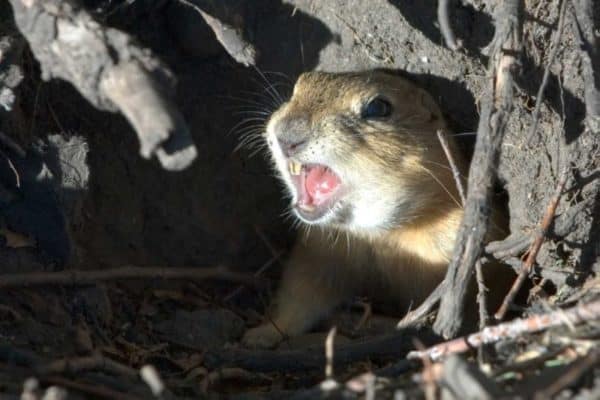 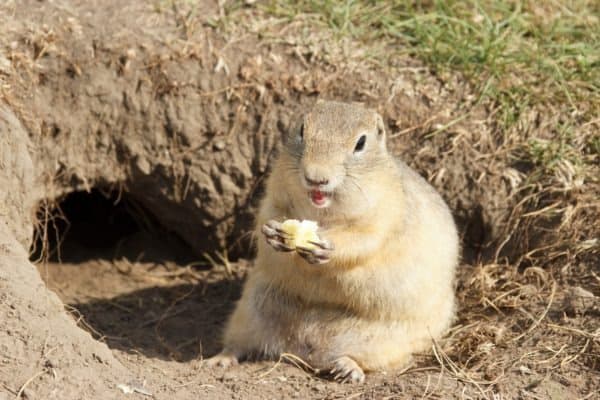 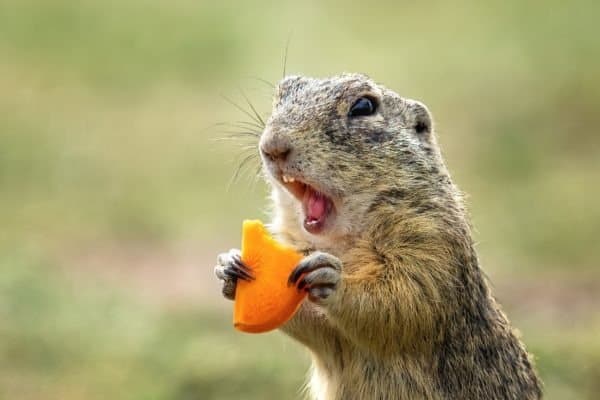 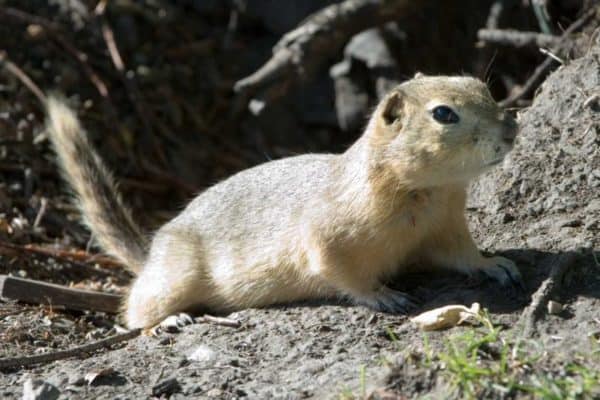 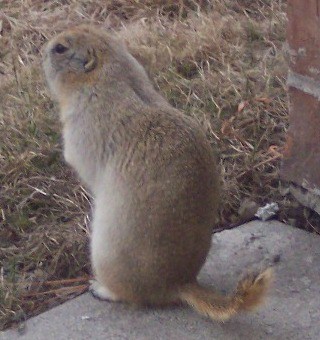 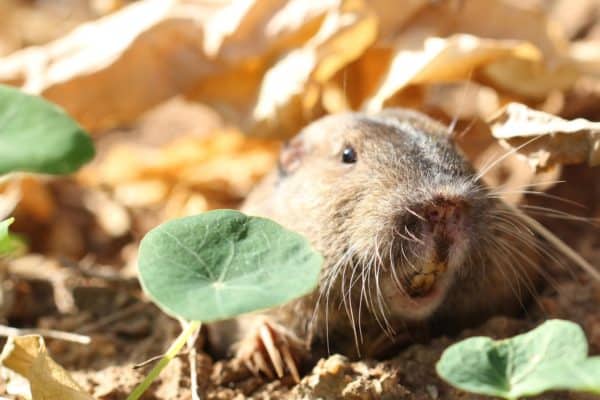 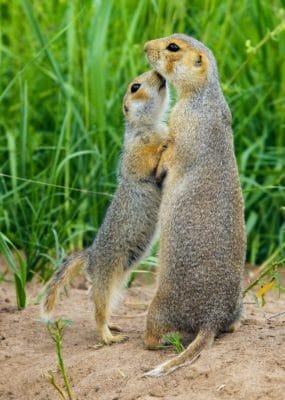 View all of the Gopher images!

Gophers are rodents that live in North America and Central America. They are herbivores eating a variety of plants. Though these rodents are active in the daytime they stay mostly underground in tunnels. They are solitary animals. The lifespan of a gopher ranges from 1 to 3 years.

• The pocket gopher can turn its fur-lined pouches inside out to remove the contents, much like a pocket
• The gopher is able to close their lips while keeping their incisor teeth exposed; if they did not do that, they would get a lot of dirt in its mouth while digging
• Gophers don’t need to leave their tunnels even to find water. They get their water supply from the moisture in the plants they eat
• They have flat teeth that help them to grind up bulbs, roots, and other parts of a plant
• They sometimes share their tunnels with other animals

The scientific name for this gopher is Geomys bursarius. It’s in the Geomyidae family and belongs to the class Mammalia. This rodent is also known as a pocket gopher because it has fur lining the pouches inside its cheeks. It is capable of turning these pouches inside out to remove the contents. Like a pocket!

The origin of the word gopher is believed to have come from the French word gaufre. Gaufre means waffle which may refer to the complicated pattern of the tunnels made by pocket gofers.

Gopher: The Animal’s Appearance and Behavior

Gophers have brownish, black fur as well as small dark eyes and tiny ears. A gopher has a slender body that it can flatten allowing it to fit into narrow tunnels. This rodent ranges from 5 to 14 inches long. A gopher that is 5 inches long is an inch or so shorter than the average pencil.

Normally, these rodents weigh around one pound. A gopher weighing one pound is equal in weight to two hamsters you’d see at a pet shop. The largest species of gopher can grow to be 2.2 pounds and live in Central America.

This rodent has pouches in its cheeks. It stuffs its pouches with food and carries it to different locations without losing any of it. The ability to stuff its cheeks allows this rodent to take food underground and eat it in safety.

A gopher has a mouth and teeth designed to help it to survive in its environment. For instance, gophers have flat molars that make it easy to chew up dry, rough vegetation. Also, they are able to close their lips while keeping their incisor teeth exposed. Some scientists compare the appearance of a gopher’s incisor teeth to a chisel. They use their incisors to dig through the dry, pebbly ground to make their tunnels. They push up rocks and stones as they progress. If a gopher wasn’t able to close its lips, it would get a lot of dirt in its mouth while digging!

This animal has claws on its front paws that help it to burrow quickly so it has a place to hide from predators. Hiding underground is the main defense of this animal due to its small size.

Gophers are shy, solitary animals except during the breeding season. However, they’ve been known to share their burrows and tunnels with animals other than gophers. Rabbits, lizards, and toads are all animals that may share a tunnel system with a gopher. They may not be best friends, but they manage to share the same living space!

Gophers live in North America on the Great Plains ranging from Texas all the way up to the Canadian border. There are also gophers living in Central America specifically down into Mexico.

Some species of these rodents live in deserts with extremely hot temperatures while others live near the mountains with colder temps. The main living requirement for a gopher is sandy soil that they can dig into to make a burrow. They can go underground to escape the heat or cold.

Pocket gophers make two types of tunnels. One type of tunnel is long with many twists and turns. It is near the surface of the ground and gophers move through this tunnel to find plant roots. The second type of tunnel is deeper in the ground. Gophers use these tunnels for their nests, storing food and hiding from predators.

They can live in wooded areas , grasslands, deserts, or meadows. These rodents don’t migrate or go into hibernation. They are busy digging to extend tunnels, looking for food or breeding at various times throughout the year.

Gopher Diet: What Does The Animal Eat?

What does a gopher eat? Gophers are herbivores. They like to eat the roots, bulbs, and tubers of a plant along with its leaves. Normally, a gopher finds the roots of plants growing in its tunnels and pulls the plant down to eat it. As a way to protect itself against predators, this rodent avoids leaving its tunnels to forage for plants above ground.

Gophers don’t need to leave their tunnels even to find water. They get their water supply from the moisture in the plants they eat.

Some of a gopher’s predators include coyotes, snakes, weasels, hawks, and owls. When a gopher spots a predator, it heads for the protection of its burrow. These rodents can even move in a backward motion to quickly disappear into their burrow. They have sensitive tails that help to guide them back into the safety of their home.

If a gopher is above ground foraging for plants it can easily fall prey to a swooping owl or hawk. Plus, many snakes are able to follow gophers into their tunnels to capture them. Coyotes, bobcats, and other larger animals can overpower these rodents.

The official conservation status of a gopher is Least Concern. Gophers are thought of as pests in some cities where they dig tunnels under gardens and around homes. But their population remains stable.

In the spring season, male gophers go in search of burrows where female gophers live. Most gophers breed just once each year though some have been known to breed in the fall season as well as spring.

Gophers have more than one mate. The gestation of a female gopher ranges from 18 to 30 days. Normally, a female gopher has 5 to 6 live babies also called pups. A group of pups is called a litter. They have their litter in a nest inside their tunnel system.

Gopher pups are born blind as well as with their ears closed. They aren’t able to see or hear until they are 5 weeks old. The pups nurse from their mother for several weeks and are weaned at about 40 days old. The mother gopher cares for her pups by herself. Gopher pups can stay with their mother for up to two months, then they go out to dig their own burrows.

The lifespan of a gopher ranges from 1 to 3 years. Though they are quick moving rodents, they have many predators that live nearby and share their environment.

The conservation status of the pocket gopher is Least Concern and its population is holding steady. Scientists estimate an average of 4 to 5 gophers per acre of land. However, a few species of gopher are decreasing due to habitat loss. Two examples include the tropical pocket gopher and the Michoacan pocket gopher.

The tropical pocket gopher lives in Mexico. Its official conservation status is Endangered due to loss of habitat. Clearing of land and construction is taking away the habitat of this gopher. They are on the list of highly threatened animals in Mexico.

The Michoacan pocket gopher also lives in Mexico and is listed as Endangered as well. Habitat loss due to forest clearing and competition for food from other animals in the environment are two specific reasons for the population decrease of the Michoacan pocket gopher. It is now protected by the Mexican government as an animal in danger of extinction.

View all 46 animals that start with G

What is a gopher?

A gopher, also called a pocket gopher, is a small rodent weighing 1 to 2.2 pounds. It’s an herbivore spending most of its life underground in a system of tunnels. This rodent is in the same family as the beaver. It has pouches in its cheeks where it stores and carries food to different places.

How do you get rid of gophers?

Gophers have been known to dig holes and tunnels in the front and backyards of homes. This is why they are considered a pest in some areas.

Some people get rid of gophers by setting live traps so once a gopher is caught in the trap, it can be relocated to a wooded area to live.

In addition, sometimes having a dog on the property is enough to chase gophers away or discourage them from even coming near a home.

No, gophers are not dangerous. They are shy animals that want to stay out of sight unless they have to appear above ground to find food.

How do you set a gopher trap?

A live gopher trap is easy to set. First, prop the door of the trap open using the trigger arm on the side of the trap. Put bait in the far end of the trap. Lettuce leaves are a good choice for bait. Make sure the door is set so when the gopher presses down on the platform to get the lettuce, it will cause the door to drop closed trapping the rodent inside. Monitor the trap so you can take the captured gopher to a different location and set it free.

Always handle the cage with heavy gloves because a trapped gopher can become frightened and try to bite through the trap’s wire walls.

What is the difference between a gopher and a groundhog?

Though a gopher and a groundhog look alike, there are many differences. For one, groundhogs are larger than gophers. In fact, a groundhog can sometimes be as long as 2 feet! Also, a gopher’s incisors are always visible even if its mouth is closed. Alternatively, the teeth of a groundhog can only be seen when its mouth is open. A groundhog’s tail has thick fur on it whereas a gopher’s tail doesn’t have any hair.

Learn these key differences and you’ll never mistake a gopher for a groundhog or vice versa!

Are Gophers herbivores, carnivores, or omnivores?

Gophers are Omnivores, meaning they eat both plants and other animals.

What Kingdom do Gophers belong to?

Gophers belong to the Kingdom Animalia.

What class do Gophers belong to?

Gophers belong to the class Mammalia.

What phylum to Gophers belong to?

Gophers belong to the phylum Chordata.

What family do Gophers belong to?

Gophers belong to the family Geomyidae.

What order do Gophers belong to?

Gophers belong to the order Rodentia.

What type of covering do Gophers have?

Gophers are covered in Fur.

What genus do Gophers belong to?

Gophers belong to the genus Geomys.

In what type of habitat do Gophers live?

What is the main prey for Gophers?

What are some predators of Gophers?

Predators of Gophers include owls, snakes, and coyotes.

How many babies do Gophers have?

The average number of babies a Gopher has is 6.

What is an interesting fact about Gophers?

What is the scientific name for the Gopher?