There are nearly 1.5 million worldwide! Click through all of our Cow images in the gallery. 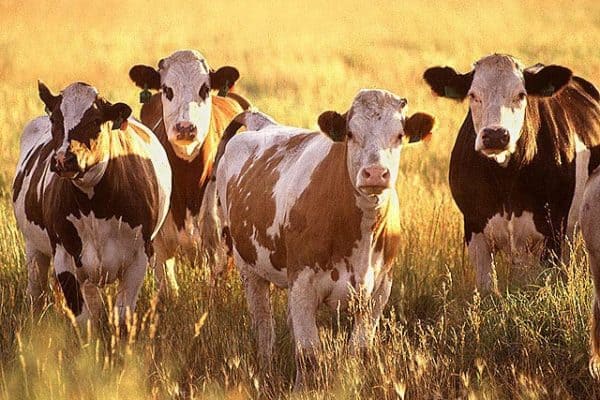 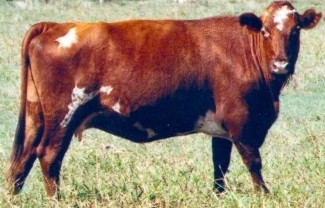 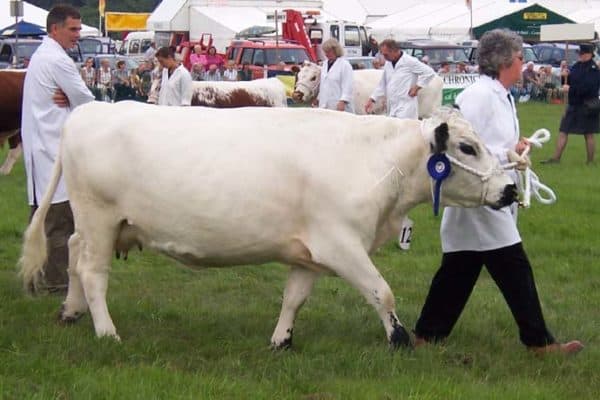 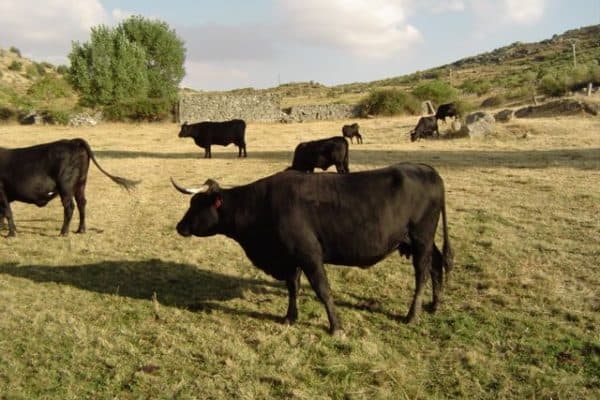 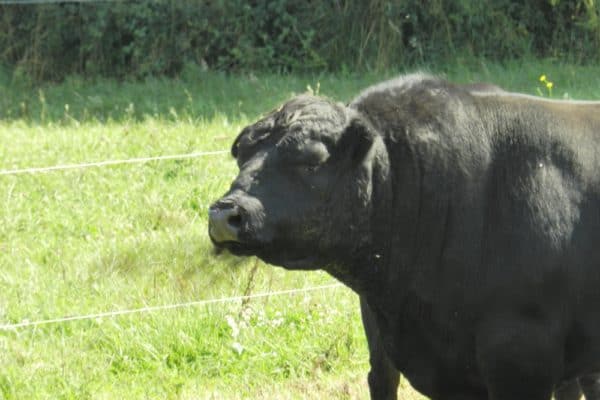 View all of the Cow images!

“…roughly one cow for every seven humans on earth…”

Cows are animals that are found all over the world. They were domesticated by humans over 10,000 years ago for work, dairy, meat and more. However, scientists are still learning much about their complex brains and emotions. These gentle giants range from 700 lbs, to as big as a car, with some having long horns, humps on their backs, colorful patterns or other cool traits! While technically a ‘cow’ only refers to a female, the term is often used to describe any animal of the species regardless of gender. The technically correct term for a group of animals in this species is ‘cattle’.

Cows are animals that come in a wide array of breeds, colors, sizes and even shapes! Standing on four legs with hooved feet, the average adult cow weighs a little less than a small car–about 1,500 pounds. This varies depending on breed, ranging from the Chianina cow, which grows to over 3,700 pounds, to the Dexter cow, which tops out at about 750 pounds. These breeds stand six feet and three feet tall at the shoulder, respectively.

Most cows have a thin layer of bristly hair, but certain breeds have longer hair. These skin and hair combinations come with a number of distinct patterns. The holstein is the most well-known style, with irregular black and white shapes, with a strip of white between their eyes. A “red” holstein has brown or reddish brown patches in place of the black. Angus cows are black from head to tail. The Highland cow features long, shaggy, brownish-red hair. Though there are hundreds, if not thousands, of breeds with different markings, most feature variations on gray, brown, black and white hides.

Indicus cows of any breed have another feature: a “hump.” This protrusion on the back of these cows’ necks are the easiest way to tell them from taurus cows.

Almost all cows have horns. These range in length and shape across breeds. Sticking almost straight out to the sides from its head and reaching roughly three feet long each, the horns on a Texas Longhorn cow are easy to spot. In fact, a Texas longhorn holds the Guinness World Record for cow horn length, measuring over ten feet long from one tip to another. Meanwhile, a Brahman cow has roughly six-inch-long horns that point up and back from its head. The English longhorn can have horns that point mostly downward, curving similarly to a sheep’s horns.

Recent research has found that cows are really smart, complex animals! They can learn, have memories, figure things out and can even tell one cow from another. They have personalities too, with scientists documenting cows who are bold, shy, playful and other traits.

Cows also show emotion. When they’re scared or anxious one can see more of the whites of their eyes, such as when a mother is separated from her calf. In addition, their ears will hang more loosely when they’re feeling o.k. Their mood can also be affected by the mood of other cows, what scientists call “emotional contagion.” For example, a cow might eat less or act more anxious, simply because other cows in the herd are scared or hurt.

Cows are animals that can survive in many climates and places. The indicus subspecies is better suited to tropical environments, while taurus cows can survive easily in wintery climates. In general, cows need access to a wide range of space, so they can graze on grasses. Whether in the mountains, jungle or wide open plains, cows can adapt to many different environments.

Cow are herbivores, which means they grass and other plants. Cows can eat a wide range of tough grasses thanks to their very unique way of eating. A cow will first bite plants or grass and swallow them unchewed. This unchewed food goes into its first stomach until later. When the cow finds a quiet place, it will begin to vomit the plants back into its mouth. This vomit is called “cud,” and the cow will chew the cud down into smaller pieces for further digestion.

Predators and threats to cows

Cow predators include dogs, coyotes, bobcats and similar animals. Because most cows are on farms, the threat of predators is typically small. In the United States, for example, only two percent of all farm cow deaths were the result of predators. Most of those predators were dogs, followed by coyotes.

The bigger threat to cows comes from disease. Because cows move in herds, one sick cow can quickly infect others. Depending on the type of infection, this can cause big problems. For example, some worry about a return of Foot and Mouth Disease (FMD). FMD doesn’t affect humans, but can wreak havoc on cows. FMD is spread easily for miles, and can quickly infect a whole herd.

Governments take cow diseases very seriously. In 2003, reports that some U.S. cattle were infected with a disease called “mad cow disease” resulted in governments not allowing U.S. beef in their countries. This cost beef farmers roughly $11 billion in lost sales.

Cows begin their life after a nine-month pregnancy. Following a live birth, the baby, known as a calf, will nurse for a few months before weaning. The baby can typically walk shortly after birth It will take about one to two years for a cow to grow to the point that it can start having babies of its own. Cows typically have one baby at a time.

Most farm cows are bred artificially–that is, a sperm is implanted in the cow. This helps farmers to avoid certain genetic problems.

As an adult, a cow will give birth to a single calf once every two years or so. Though the natural lifespan of a cow can go over twenty years, most cows don’t live too much beyond ten years. This is because the majority of cows are part of a farming operation, and after a few years of milk production, cows are typically then tagged for meat processing.

Numbering over 1.4 billion, there’s roughly one cow for every seven humans on earth. This makes cows and cattle the second most abundant farm animal in the world. Though there are select areas of wild cows, the majority of bos taurus are domesticated. This means they were raised to live on a farm.

Though cows in general are not at risk, certain breeds are significantly less common than others. Various conservation groups work to retain rare breeds of cow, such as the Dexter.

Technically, a “cow” is a female that has given birth at least once. Prior to giving birth, the cow is called a “heifer.” Many people also use the term “cow” when talking about either male or female cattle. Cattle, however, is the common term for any member of the herd.

What is the purpose of a cow?

Throughout most of the world, cows are used for milk. After a cow gives birth, farmers let it nurse the baby calf with the special milk, called colostrum, for the one or two months it is produced. After that, the cow will then spend roughly 10 months producing around seven gallons of regular milk every day.

How many stomachs does a cow have?

A cow has four separate stomachs. The first two stomachs store largely unchewed food, while a cow waits for a better time. When it has the time, a cow will more thoroughly chew food from these stomachs, called “cud,” before swallowing it into one of the two other stomachs to finish digestion.

Where do cows come from?

Are Cows herbivores, carnivores, or omnivores?

What Kingdom do Cows belong to?

Cows belong to the Kingdom Animalia.

What phylum do Cows belong to?

Cows belong to the phylum Chordata.

What class do Cows belong to?

Cows belong to the class Mammalia.

What family do Cows belong to?

Cows belong to the family Bovidae.

What order do Cows belong to?

Cows belong to the order Artiodactyla.

What genus do Cows belong to?

Cows belong to the genus Bos.

In what type of habitat do Cows live?

Cows live in forests and grasslands.

What is the main prey for Cows?

What are some distinguishing features of Cows?

What are some predators of Cows?

Predators of Cows include humans, bears, and wolves.

What is the average litter size for a Cow?

The average litter size for a Cow is 1.

What is an interesting fact about Cows?

There are nearly 1.5 million Cows worldwide!

What is the scientific name for the Cow?

The scientific name for the Cow is Bos Taurus.

What is the lifespan of a Cow?

How fast is a Cow?

A Cow can travel at speeds of up to 25 miles per hour.