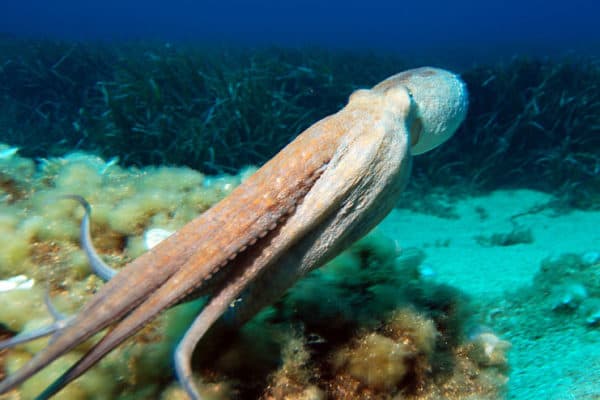 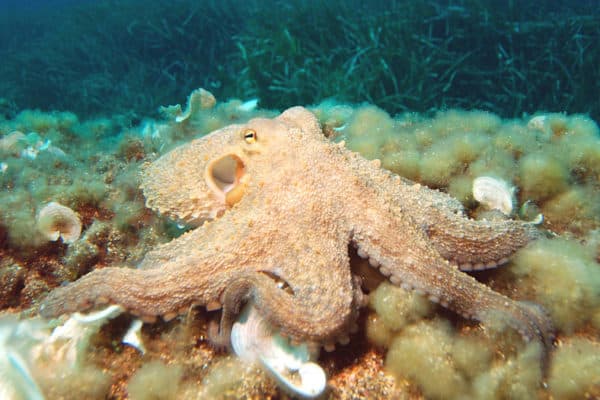 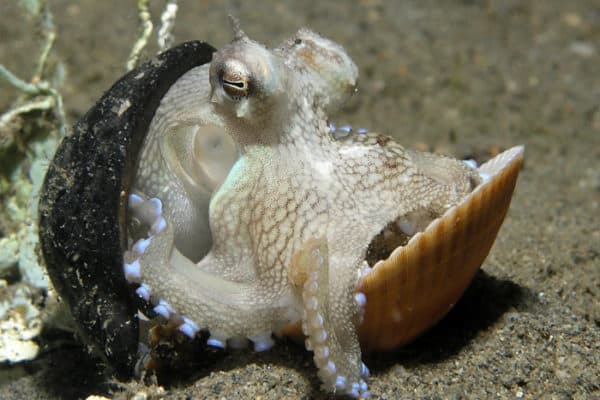 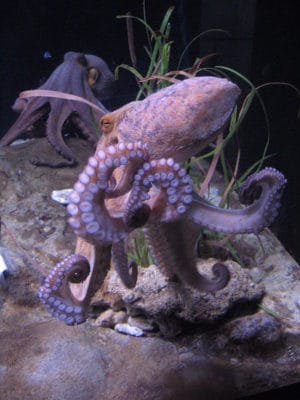 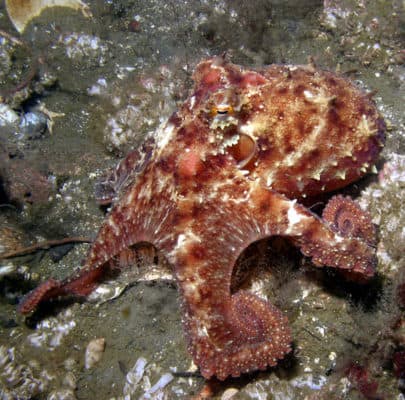 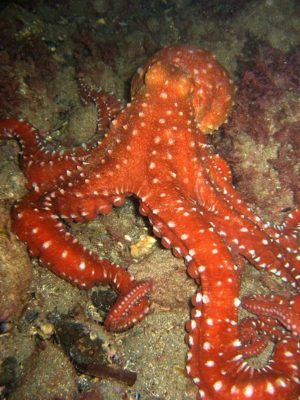 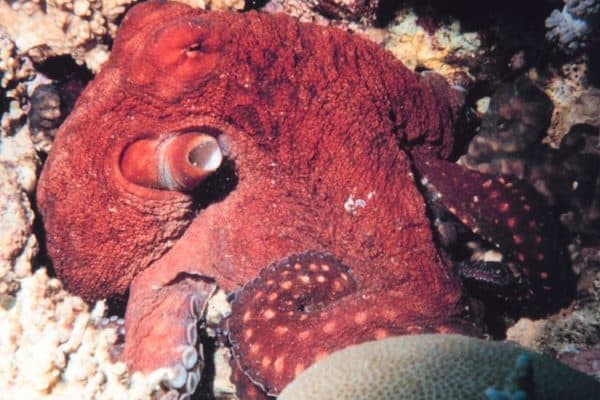 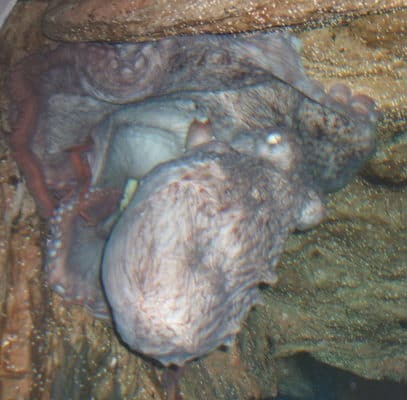 The octopus holds the distinction of being the most intelligent of all invertebrate animals.

With the highest brain-to-body-mass ratios of all invertebrates – higher even than those of some vertebrates – the octopus is regarded as the smartest of all invertebrate animals. These cephalopods are intelligent enough to engage in deceitful activities, including pretending to be “moving rocks” to outwit predators. More than 300 species of octopus exist, and they are mostly found in tropical and temperate seas around the world. These creatures have existed for many millennia; the first known octopus fossil, Pohlsepia, is believed to have lived more than 296 million years ago.

Octopuses belong to the mollusk order. They fall under the classification of cephalopoda and under the order Octopoda. The term Octopoda was first coined by English biologist William Elford Leach in 1818.

The scientific name for the common octopus is Octopus vulgaris. This Latin term is derived from a couple of Ancient Greek words -- okto, which means “eight,” and pous, which means “foot.” Therefore, the term “octopus” means “eight feet,” which reflects the fact that these creatures have eight “feet,” which are more commonly referred to as arms.

An octopus is defined as any eight-armed cephalopod mollusk of the order Octopoda. True octopuses belong to the genus Octopus, a massive group of broadly distributed shallow-water cephalopods that also includes squids and cuttlefish. There are more than 300 species of octopus, and they vary widely in terms of size. The largest species, the giant Pacific octopus, measures an average of 18 feet long and has an arm span of 14 feet. The smallest, Octopus arborescens, measures only 5 cm long.

The typical octopus has a saccular body, which means that their head is only slightly defined from their body. They have eight contractile arms, and each one contains two rows of fleshy suckers. Their arms are joined at their bases by a web of tissue that’s known as a skirt; their mouth is found in the center of the skirt and contains a pair of sharp beaks and a file-like organ known as a radula.

Octopuses’ soft bodies can change shape rapidly, allowing them to squeeze through very small spaces. Even the largest species of octopus are able to pass through openings as small as 1 inch in diameter. They also have a hollow, bulbous mantle that is fused to the back of their head; it contains most of the creature’s vital organs, including its gills, and it connects to the exterior through a funnel or siphon. Their large, complex eyes are located on the top of their head.

The largest specimen of the giant Pacific octopus on record had a 30-foot arm span and weighed approximately 600 pounds. The smallest weighed less than one gram and measured only about 1 inch in length.

Octopuses engage in respiration by drawing water into their mantles through an aperture. It then passes through the gills before being expelled by the siphon. Octopuses’ thin skin also absorbs some oxygen from the water.

These creatures move in a variety of ways. They crawl using their front two arms, using the other six for foraging. They swim by moving water through their siphons; when doing so, their arms trail behind them. They can also move backwards rapidly by ejecting jets of water from their siphons.

Octopuses are also known for ejecting ink. They do this to evade predators; the cloud of ink, which is black in color, masks them so that they can move away quickly. In some species, the ink contains a venom that paralyses the sensory organs of the attacker. Only one species of octopus, the blue ringed octopus, is poisonous to humans. In this case, they inject prey with a paralyzing saliva.

Most octopuses are solitary and spend roughly 40 percent of their time hiding in dens. However, some are social and may live in groups of up to 40 other individuals. They are not territorial, but they typically stay within a defined home range. They aren’t migratory, so they spend their whole lives in the same general area.

Octopuses also have an excellent sense of touch. Thanks to chemoreceptors on their suction cups, they can taste whatever they touch. Their skin also contains highly developed pigment-bearing cells called chromatophores that allow them to change the color, opacity and even reflectivity of their skin quickly.

Finally, octopuses are the most intelligent of all invertebrate animals. The veined octopus, Amphioctopus marginatus, was observed in 2009 excavating coconut half shells from the ocean floor and using them as part of its den. This was the first documented use of tools by an invertebrate and is further evidence of how intelligent these creatures are. 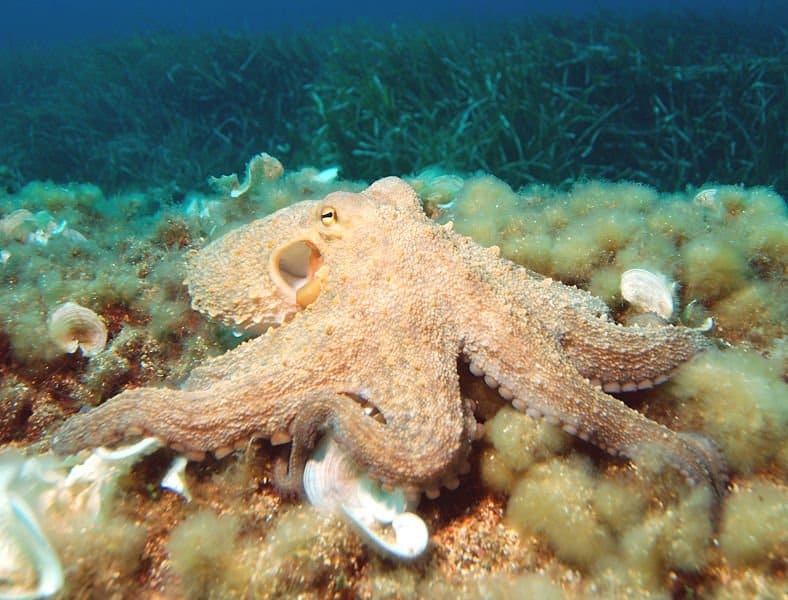 The common octopus, O. vulgaris, primarily lives in tropical and temperate seas around the world. These creatures typically live in dens that are found in holes or crevices along the rocky bottom of the sea, which is in line with their retiring and secretive nature. Various species of octopus are found in places like coral reefs, seabeds and pelagic waters. However, some are found in intertidal zones, and others are found in abyssal depths. The dumbo octopus, for example, lives an average of 13,100 feet below the surface.

Octopuses are carnivores because they subsist solely off of other creatures. In particular, they mostly feed on crabs and other crustaceans. Lobsters are also popularly consumed, and some species of octopus are known to eat plankton. Predatory, bottom-dwelling species of octopus primarily live off of crustaceans, polychaeta worms and clams and other mollusks. Open-ocean species of octopus primarily consume other cephalopods, prawns and fish. When feeding, they bring prey back to their dens and use their radula to drill shells and rasp away flesh. They use their beaks, which are very sharp, to tear apart prey.

According to the IUCN, most species of octopus are not endangered. In fact, recent studies have suggested that populations may be booming. However, these creatures do face numerous threats. Considered a delicacy by many cultures, they are hunted regularly by humans. Therefore, humans are among the octopus’s top predators.

In the wild, octopuses are preyed upon by many other creatures. A variety of marine fishes are known to consume octopuses, for example. Other common predators include seabirds, other cephalopods and sea otters.

There are separate sexes of octopuses. The male octopus has a specialized arm called a hectocotylus. This appendage inserts packets of sperm, which are known as spermatophores, directly into the mantle cavity of female octopuses. During reproduction, the male typically clings to the top or side of the female or hovers beside her. After delivering the spermatophores, males become senescent, which means that they gradually deteriorate before dying. Most die within about two months.

Eggs, which are about 1/8th of an inch long, are laid by female octopuses in holes and under rocks. On average, females lay around 100,000 eggs at one time, and it takes between four to eight weeks for them to hatch. During this period, the female octopus guards the eggs and cleans them with her suckers. She also agitates them with water. Once they hatch, miniature versions of the parents – tiny octopods – emerge. They spend several weeks drifting in plankton before taking refuge along the bottom of the sea. No parental care is provided beyond the care that is given by the female while waiting for eggs to hatch, so baby octopuses are on their own.

Most species of octopus, including the common octopus, mate during the winter. Unless they are mating, they are typically solitary. Octopuses have fairly short lifespans, with some species only living for an average of six months. However, the giant Pacific octopus is known to live for up to five years. These creatures’ lifespans are limited by reproduction since males only live for a few months afterwards and females typically die shortly after eggs are hatched.

Unfortunately, scientists have no precise idea about how many octopuses exist in the world. They aren’t easy to track not only because they can’t be tagged but also because they are so solitary and reclusive in nature. However, it is believed that the population of cephalopods, including octopuses, has boomed significantly since the 1950s. There are various pieces of evidence to support this, but again, specific numbers are not available.

Why are cephalopod – and, by extension, octopus – populations growing? Researchers believe that a few different factors are at work. For one, these creatures are known to be highly adaptable to changing environments. As climate change occurs and, for example, ocean temperatures rise, they may be better able to cope than other creatures. Human activity is also believed to play a role in population increases. In particular, human fishing removes large numbers of octopuses’ natural predators from the sea. This creates a gap in the food chain that may be advantageous to these eight-armed creatures.

Are octopuses carnivores, herbivores or omnivores?

Octopuses consume no plant materials and primarily feed on crustaceans, mollusks, prawns and fish. Therefore, they are classified as carnivores. They are adapted to be fierce predators that are able to attack and paralyze prey with relative ease. They also have defense mechanisms, including venomous saliva and ink screens, that allow them to outwit their prey – and many of their predators.

Although all octopuses are technically venomous, only one species of them is capable of killing humans with venom: the blue ringed octopus. In fact, the venom of this octopus is strong enough to kill 10 grown men at one time. The venom, a neurotoxin called tetrodotoxin, causes respiratory arrest in those who are subjected to it. Tetrodotoxin is 1,000 times more powerful than cyanide and is therefore highly lethal to most creatures.

Is an octopus a fish?

Although octopuses live underwater and even have gills like fish, they are not fish at all. The two creatures do have a “shared cousin,” but it existed more than 500 million years ago. Octopuses are actually a type of mollusk – like a snail – which is in turn a type of cephalopod. Therefore, it is erroneous to refer to octopuses as fish.

How many hearts does an octopus have?

Octopuses have three hearts. They have a single systemic heart, which is responsible for circulating blood throughout their bodies. They also have two branchial hearts – one for each set of gills – that pump blood through the gills.

Does an octopus have nine brains?

Technically speaking, octopuses have nine brains. The central brain controls the octopus’s nervous system. There are also small “brains” in each arm, bringing the total up to nine. These small brains are clusters of nerve cells that allow each arm to work independently of each other.