Eels first appeared over 65 million years ago, and they continue to thrive to this day. There exist over 800 species of eel throughout the world, and most populations show few signs of decay. Whether they live in fresh or saltwater, these ray-finned fish find a way to dominate their territory. Part fish, part snake, and with mouths full of razor-sharp teeth, it’s not difficult to imagine these mysterious creatures as powerful sea monsters.

Despite their fearsome appearance, eels play a crucial role in marine ecosystems. With almost no natural predators, these nocturnal hunters prey on everything from fish to crustaceans to other eels. Some species live for up to 20 years and can grow to enormous sizes. Although they come in all shapes and sizes, from tiny dwarf eels to the giant moray, it’s the largest species that most often capture our attention. These specimens credit the eel’s nickname, “The Devil of the Sea,” due to their gigantic proportions.

To determine which eel species is the largest, you must compare both their length and weight, with weight being the most critical factor. While some species, such as electric eels and wolf eels, are referred to as eels, they belong to different animal families and are not true eels. As such, despite their immense size, they cannot count among the greatest eels. With this in mind, here is a list of the 10 largest eels in the world.

The southern conger (Conger verreauxi) is a member of the Congridae family. At their largest, they reach lengths of 6.5 feet and weigh up to 11 pounds. Their elongated, brown-grey bodies appear similar to the most common species of conger. They often occur in the waters off the southern coasts of Australia and New Zealand.

Southern congers tend to live in rocky reef areas at depths up to 330 feet. As opportunistic, nocturnal hunters, they will eat anything from fish to crustaceans and even other eels. Presently, the IUCN lists them as a species of Least Concern.

The California moray (Gymnothorax mordax) got its name because it is the only species of moray found off the coast of California. They can grow up to 5 feet long and weigh nearly 15 pounds at their heaviest. In appearance, they range from a mottled brown color to almost entirely green. While most morays live in temperate waters, the California moray is one of the few subtropical members of the species.

If you wish to spot one in the wild, they typically occupy bouldered habitats around 120 feet below sea level. Their diet primarily consists of fish, but they will also eat lobsters, shrimp, and octopuses. As they are not commercially fished and have no predators, the IUCN lists them as a species of Least Concern.

The American eel (Anguilla rostrata) is migratory fish found off the eastern coast of North America. The largest specimens measure around 4 feet long and weigh up to 17 pounds. They vary in color from dark green with brown shading to light grey with white bellies. A layer of mucus covers their bodies, lending them a naked, slimy appearance.

American eels spend most of their lives in freshwater and only venture into the ocean to spawn. Females can lay up to 4 million eggs at a time. Their diet includes crustaceans, insects, and anything else they can find to eat. Due to habitat loss caused by the building of dams along migration routes, their numbers have dwindled significantly in recent years. As a result, the IUCN lists them as an Endangered species.

Also known as the tiger moray or bird-eye conger, the fangtooth moray (Enchelycore anatina) is one of the most terrifying members of the species. It gets its name from the rows of large, glass-like teeth lining its mouth. They can grow up to 4 feet long and weigh up to 30 pounds. Their appearance is easily distinguishable due to their bright yellow-orange and brown coloring.

They can be found in warm regions of the Atlantic Ocean, including the Mediterranean Sea, Canary Islands, and Madeira. Fangtooths live and hunt in the rocky crevices along the seafloor. They mainly feed on crustaceans, cephalopods, and bottom-feeding fish. The IUCN lists the fangtooth moray as a species of Least Concern.

The slender giant moray (Strphidon sathete) is the longest eel in the world. Even amongst eels, famous for their elongated bodies, the slender giant moray puts other species to shame. The largest specimen ever recovered measured an incredible 13 feet long. While details about their weight vary, based upon their size, they could reach a maximum weight of around 40 pounds. They are usually brownish-grey, although their coloration tends to pale on their bellies.

Slender giant morays occur throughout the Indian and Pacific Oceans, from the Red Sea to the western Pacific. They tend to like muddy environments where they can blend in with their surroundings. River estuaries and bays count amongst their favorite hunting grounds. Their diet includes fish, crustaceans, and mollusks. The IUCN lists giant morays as a species of Least Concern. However, no study has evaluated the status of slender giant morays.

Also known as the Antillean conger, the grey conger (Conger esculentus) is another common member of the conger family. They get their name from their sleek grey color, although their bellies appear more white than grey. While most specimens commonly measure about 3 feet in length, they can reach up to 5.2 feet long and weigh nearly 55 pounds.

Grey congers live in tropical and subtropical marine environments. They occur throughout the western central Atlantic Ocean, particularly around Cuba, Jamaica, and northern South America. Capable of living at depths of 1300 feet, grey congers inhabit coral reefs and rocky regions along the ocean floor. Their primary food source includes finfish, as well as other bottom-feeding species. Despite a thriving fishing industry for grey conger meat, the IUCN lists them as a species of Least concern.

The green moray (Gymnothorax funebris) is one of the largest species of moray eel. Their name comes from the bright greenish-yellow color that runs the length of their bodies. Although sometimes confused for the yellow moray, green morays are easily distinguishable based solely upon their size. They can grow up to 8 feet long and weigh around 65 pounds.

Green morays live throughout the western Atlantic Ocean from New Jersey to Bermuda and off the coast of Brazil. They live at depths of up to 130 feet below sea level. Like most species of moray, they are nocturnal hunters. They predominantly feed on fish, crab, shrimps, octopuses, and squid. The IUCN lists the green moray as a species of Least Concern.

The giant moray (Gymnothorax javanicus) is the largest moray eel in terms of body mass. While the slender giant moray may be the longest eel in the world, the giant moray is much heavier than its skinny cousin. At their most massive, they can measure 9.8 feet in length and weigh 66 pounds. Large tan spots cover their brownish bodies, and adults feature two leopard-like spots behind their heads.

You can find giant morays throughout the Indian and Pacific Oceans, including the eastern coast of Africa, Red Sea, Hawaiian Islands, Polynesia, Fiji, and Japan. They live in lagoons and along the outer edges of coral reefs. Their diet mainly consists of fish and crustaceans. They have few predators, and they will even cooperatively hunt with other fish species, such as the roving coral grouper. Although usually not aggressive to humans, they will attack if cornered or threatened. Currently, the IUCN lists them as a species of Least Concern.

Also known as the dog eel, poison eel, and sea eel, the American conger (Conger oceanicus) is one of the largest eel species. While most specimens measure a little longer than 3 feet, they can reach up to 6.5 feet long and weigh 88 pounds. Their bodies are usually dark grey, although their bellies generally appear whitish.

American congers occur throughout the western Atlantic Ocean from Cape Cod to northeastern Florida. Although they migrate, they do not spend any part of their lives in freshwater, unlike some eel species. You can find them in shallow and deep water, although they prefer to live along the seafloor. They subsist primarily on fish, mollusks, and crustaceans. Although they have no natural predators, a small fishing industry exists for American conger. As their population is widespread and abundant, the IUCN lists them as a species of Least Concern.

The European conger (Conger conger) is easily the largest eel in the world. On average, adults measure around 5 feet long and weigh nearly 159 pounds. However, one enormous specimen measured 9.8 feet long and weighed 350 pounds. No scales cover their bodies, and although they usually appear grey, they can also be blackish. Due to their large size and aggressive nature, they occasionally pose a threat to divers.

European congers can be found in the eastern Atlantic around Norway and Iceland, the Mediterranean, and the Black Sea. While sightings typically occur between 0-1500 feet below the ocean surface, they can reach depths up to 10,000 feet below sea level when migrating to spawning grounds. They live in rocky outcroppings called eel pits and will occasionally cohabitate with other eels. Their diet consists of fish, octopuses, squid, and crustaceans. Due to their wide distribution and numbers, the IUCN lists them as a species of Least Concern.

What is the largest eel ever caught?

The largest eel ever caught was a reported 350 pound European conger that was captured in fishing nets outside of Iceland.

What is the largest freshwater eel species?

What is the largest moray eel?

The giant moray is the largest species of moray eels. It can reach nearly 10 feet in length and weigh 66 pounds. 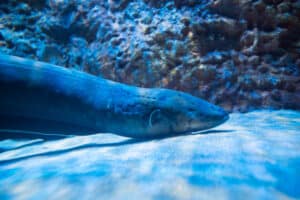 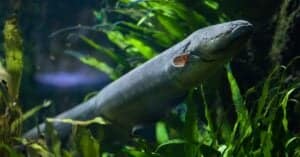 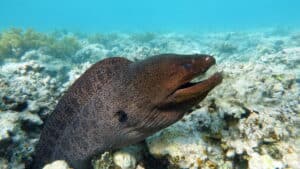 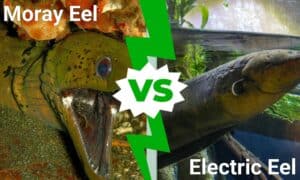