“Spectacled bears communicate with other bears with screeching, cooing and purring sounds”

This bear’s name relates to the tan or light-colored hair near both its eyes making it look like it’s wearing eyeglasses or spectacles. Male spectacled bears can grow to be 6 and a half feet long. These bears live in South America. They are omnivores that make their homes in trees.

The spectacled bear is this animal’s common name and Tremarctos ornatus is its scientific name. It’s sometimes called the Andean bear. It belongs to the Ursidae family and is in the class of Mammalia.

Tremarctos ornatus is a Greek word. Trem means hole while arctos means bear. The word hole is a reference to a hole in the humerus bone of this particular bear. The word ornatus means decorated. Decorated refers to the unusual coloration of this bear’s fur.

The fur on the body of a spectacled bear is black and brown. These bears have white or light-colored fur creating a half-circle pattern around both their eyes.

Every spectacled bear has a unique pattern of white markings on the fur that covers its head, neck, and chest. No two spectacled bears look the same! Scientists think of these markings as the bear’s ‘fingerprint.’

Male bears are about twice as large as females. Males can grow to 6 and a half feet long weighing from 220 to 380 pounds. To put it into perspective, a 6-foot bear is equal in length to the average grown adult man. A 380-pound bear is equal in weight to two adult kangaroos!

These bears are one of the smallest species of bears in the world. The polar bear is the largest bear in the world. As a comparison, a male polar bear ranges from 8 to over 9 feet in length while a male spectacled bear can be as long as 6 and a half feet.

These bears are solitary, shy animals. They stay hidden from sight most of the time. Of course, they are seen together during the breeding season. Unlike other types of bears, the spectacled bear stays active year-round. They don’t go into hibernation because they have a food source available to them throughout the seasons.

These bears live in South America in the tropical Andes Mountains. Their territory includes Peru, Bolivia, Columbia, Ecuador, and Venezuela.

These bears live in cloud forests located 14,000 feet up in the Andes mountains. They’re called cloud forests due to the tropical climate and the low-level clouds or mist that constantly covers the treetops. Spectacled bears spend a lot of time relaxing on the branches of trees and climb down when they want to find food. They have sharp, long claws and their front legs are longer than their back ones. These two features help these bears to climb high into the trees. In addition, they use their claws as well as their strength to bend and break branches to create a platform nest in a tree.

Most of these bears stay in the same area throughout the year. They’ll only migrate a short distance if they need to do so to find food.

What do spectacled bears eat? These bears are omnivores. They eat a lot of plant life including palm fronds, fruit, orchid bulbs, nuts, and berries. These bears also eat insects and small animals such as birds and viscachas (a type of rodent). Sometimes they’ll eat dead animals or carrion, they find in the forest.

There are some poisonous frogs that live in the Andes mountains. These would be harmful to a spectacled bear to eat.

Full-grown spectacled bears don’t have any predators except humans. Some people hunt these bears for their claws, skin, or fur. Others hunt them for bear meat. In addition, some spectacled bears find their way onto farmland. They may be seen as a threat by a farmer and killed.

Bear cubs do have predators because of their small size. In addition, they are blind and helpless when they are born. Unfortunately, this makes them appealing to predators that may be in the area. Their predators include pumas, jaguars, adult spectacled bears and people. A cub may be attacked if it wanders too far from its mother.

These bears face losing their habitat due to forests being cut down and the land cleared. Forests may be cut down to make way for roads, highways or gas lines. Or, the land could be turned into farmland.

The mating season for spectacled bears falls between April and June. Females give off a certain scent attracting males during mating season. Two male bears may fight for the attention of one female. A female spectacled bear is pregnant for 6 to 7 months and gives live birth to 1 to 2 babies. Sometimes a female bear will give birth to 3 cubs, but that’s not as common. As a note, a female only gives birth about every 2 to 3 years.

A newborn weighs an average of just 11 ounces! Imagine a can of soup from your kitchen cabinet. An 11-ounce bear cub weighs almost as much as that soup can. A baby bear’s eyes are closed at birth and don’t open until the bear is about one month old. It can move around, but relies on its mother for everything. The fur of a newborn is black with some white markings on it. The markings become more defined as the young bear grows.

The cubs stay with their mother for about 2 years riding around on her back as she teaches them to find food and make shelter. They grow very fast reaching a weight of 22 pounds at 6 months old. After reaching the age of 2 years old, the young bears make their way out into the world on their own.

The lifespan of spectacled bears in the wild ranges from 20 to 25 years. Bears kept in a zoo can live into their 30’s. It stands to reason that a bear that lives in a protected environment is most likely to live longer than one in the wild. The record for the oldest spectacled bear goes to one that lived for 36 years and 8 months in the National Zoo in Washington DC.

Spectacled bears that live in zoos are vulnerable to a condition called alopecia syndrome. This condition causes hair loss on the flanks and elsewhere on the bear’s body.

The conservation status of the spectacled bear is Endangered. It’s difficult to get an accurate number regarding the total population of this bear because it hides most of the time. But, scientists have estimated the population to range between 6,000 and 10,000 bears in the northern part of the Andes mountains.

With both the loss of habitat and poaching issues the population of this bear seems to be decreasing. Click through all of our Spectacled Bear images in the gallery. 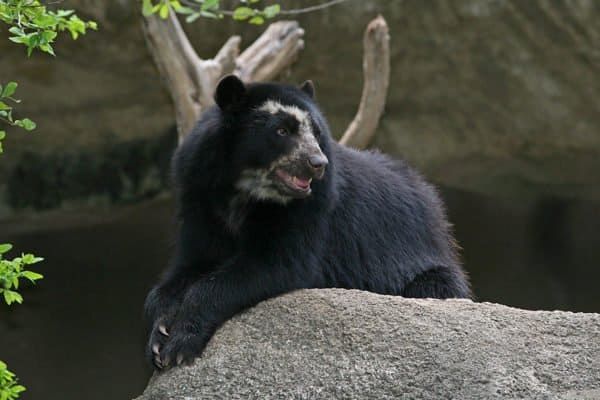 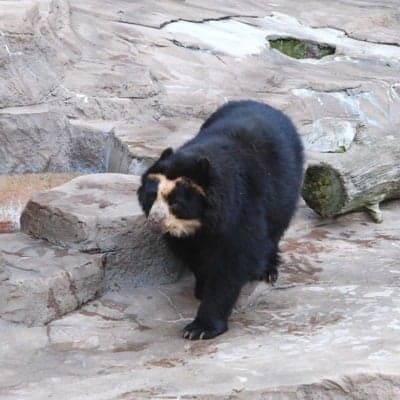 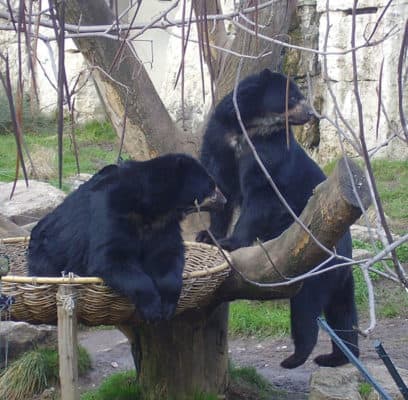 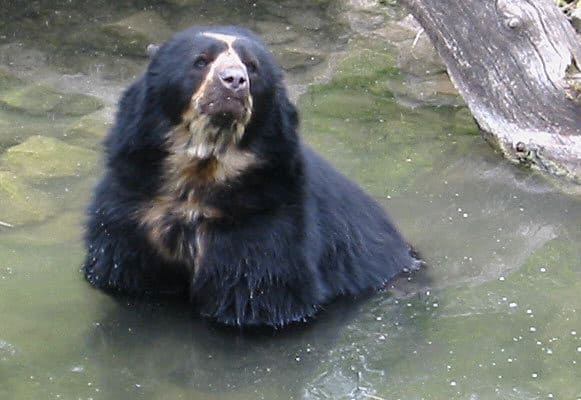 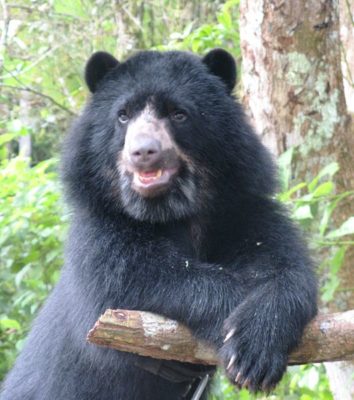 View all of the Spectacled Bear images!

What is a spectacled bear?

Why is the Andean bear called the spectacled bear?

This bear got its name from the pattern of light-colored fur around its eyes that make it look like it’s wearing glasses or spectacles. It’s called the Andean bear because it lives in the forests of the Andes Mountains.

Where do spectacled bears live?

They populate parts of Peru, Ecuador, Bolivia, Columbia and Venezuela. These bears live in the treetops in cloud forests located in the Andes mountains.

These bears are shy and non-aggressive. If you climbed the Andes Mountains in South America it may take you days to even seen one. They like to hide! During mating season is probably the most likely time to see an aggressive spectacled bear.

What Kingdom do Spectacled Bears belong to?

What phylum do Spectacled Bears belong to?

What class do Spectacled Bears belong to?

What family do Spectacled Bears belong to?

What order do Spectacled Bears belong to?

What genus do Spectacled Bears belong to?

What type of covering do Spectacled Bears have?

Spectacled Bears are covered in Fur.

What is the main prey for Spectacled Bears?

What are some distinguishing features of Spectacled Bears?

Spectacled Bears have light spectacles on their faces and long claws.

What are some predators of Spectacled Bears?

Predators of Spectacled Bears include humans, jaguars, and mountain lions.

What is the average litter size for a Spectacled Bear?

The average litter size for a Spectacled Bear is 2.

What is an interesting fact about Spectacled Bears?

Spectacled Bears are native to the Andes mountains of South America!

What is the scientific name for the Spectacled Bear?

The scientific name for the Spectacled Bear is Tremarctos Ornatus.

How fast is a Spectacled Bear?

A Spectacled Bear can travel at speeds of up to 30 miles per hour.