Click through all of our Walrus images in the gallery. 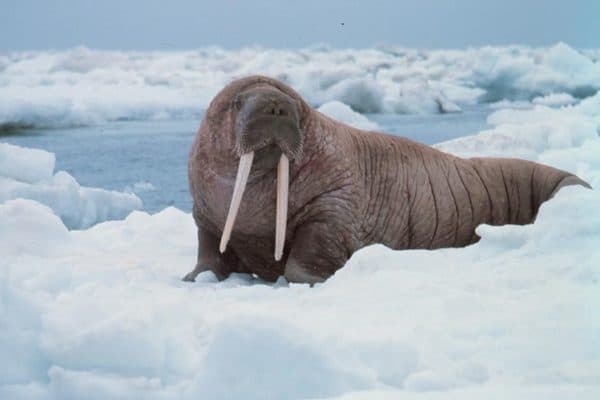 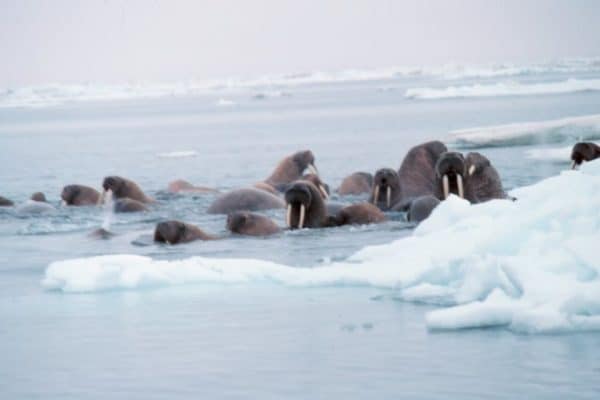 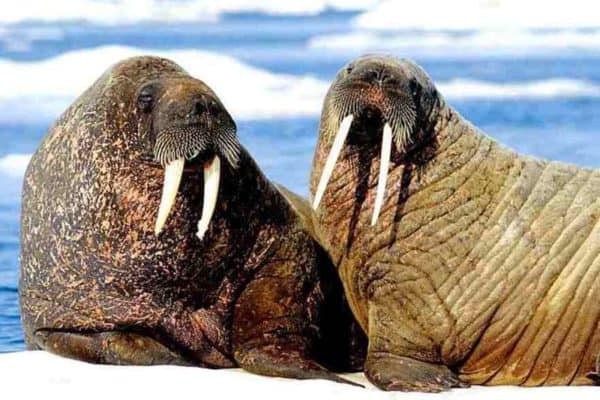 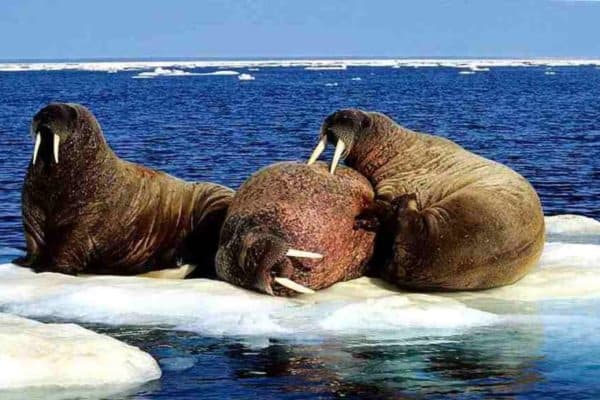 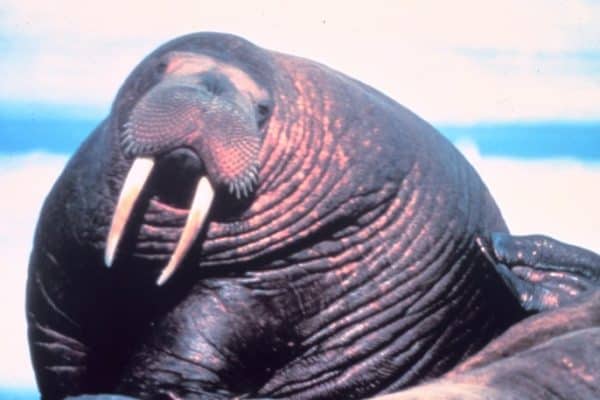 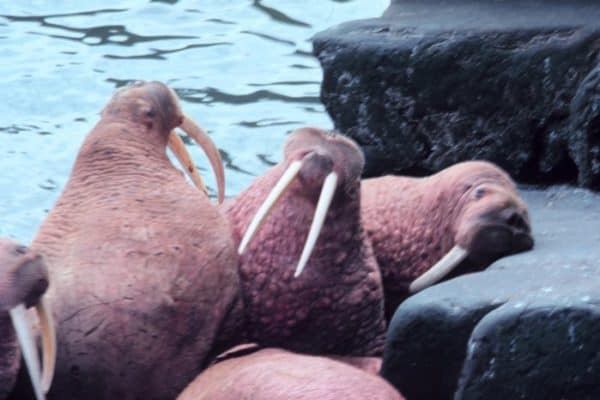 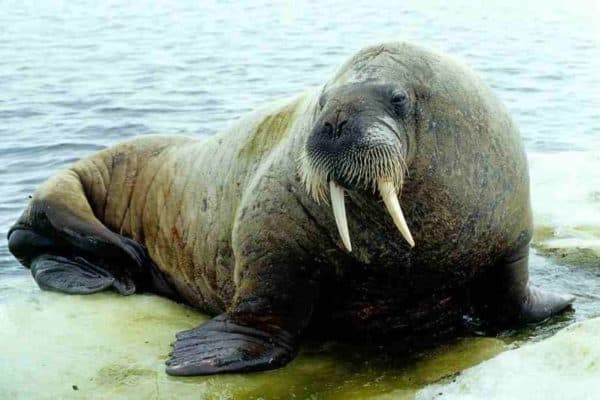 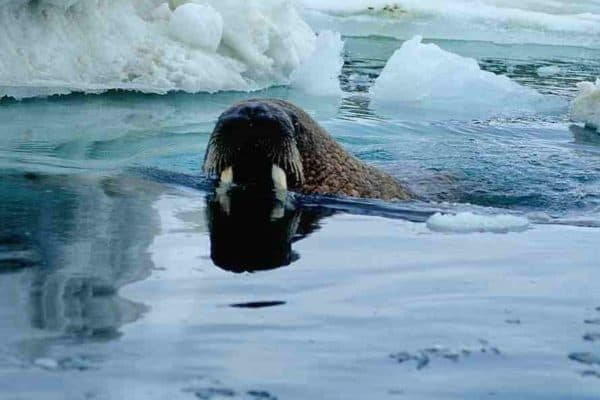 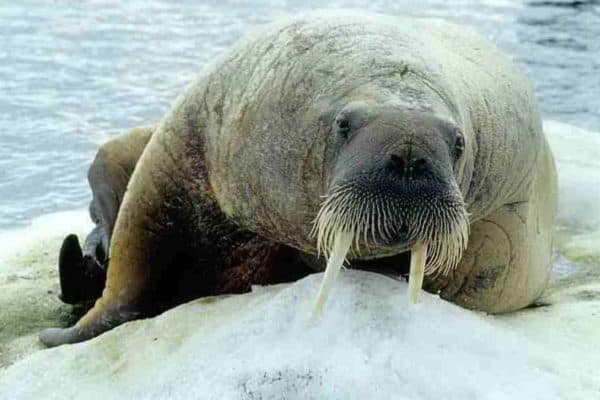 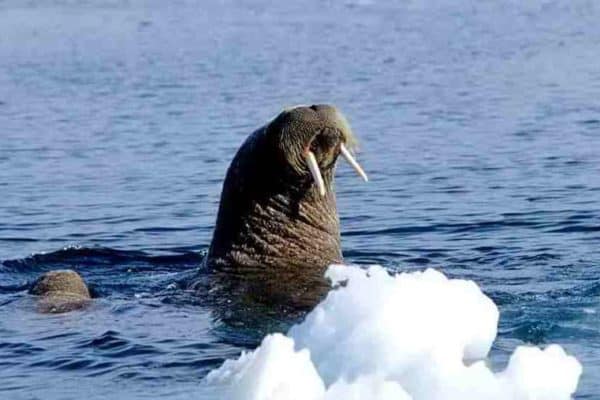 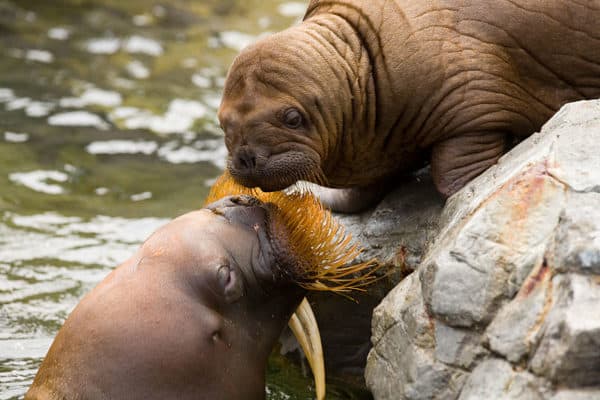 View all of the Walrus images!

The Walrus is a large marine mammal that is found inhabiting the freezing cold and icy waters of the Arctic Circle. Thought to be most closely related to Fur Seals, Walruses are the second largest ocean-dwelling mammals that come ashore to breed after Elephant Seals and are highly distinctive amongst pinnipeds due to their sensitive whiskers and long tusks. There are two different species of Walrus that vary slightly in appearance but mainly in geographic location which are the Atlantic Walrus and the Pacific Walrus. However, it is widely debated as to whether or not there is actually a third species known as the Laptev Walrus that is found in the Laptev Sea, which many believe to simply be a population of Pacific Walruses that specifically inhabit the area. The Walrus is considered to be an increasingly vulnerable animal species although gathering data on these elusive creatures can be difficult so it is hard to determine exactly the current status of Walrus populations in the wild.

Walruses have large and elongated bodies that are wider at the head and neck and taper towards their tail which is embedded in a web of skin. Their tough and wrinkled skin is covered by a layer of sparse, coarse hairs and is generally grey or brown in colour. However, whilst sunbathing out of the water, the skin of the Walrus (which can be up to 4cm thick) develops a pink-red colouration. Walruses have two pairs of flippers that are used to help to propel these large animals with great agility through the water, with their bodies powered by their back flippers while the front flippers are used to steer them in the right direction. On land, they move about awkwardly on all fours, curling their back flippers underneath them at right angles to give them more support. The skin on the bottom of their flippers is rough and knobbly which helps to prevent these enormous animals from slipping on the ice. Walruses have long tusks (extra-long upper canine teeth) that are used for both fighting and to dig into the ice when they are pulling their heavy bodies out of the water.

Walruses are found throughout the northern Atlantic and Pacific Oceans where they inhabit ice floes and rocky coastlines, along with spending a great deal of time in the freezing cold water. During the winter months when the ice is at its thickest, Walruses tend to prefer areas of thinner ice that they can easily break through to the surface from the water underneath. In the warmer summer months when the ice recedes, Walruses can be found more commonly on remote areas of rocky coastline. Despite being well suited to the freezing conditions in the far north, Walruses have on occasion been known to venture further south in areas of Central Canada, around the United Kingdom and even as far as the waters close to the Spanish coast. They do however, spend most of their time in and around the Arctic Circle where they are becoming increasingly under-threat from global warming which is rapidly depleting the ice that these animals have learnt to rely on.

Walruses are incredibly sociable animals that live in large herds on the ice floes that can contain up to thousands of individuals and consist mainly on females (cows) with their young, along with a number of dominant males (bulls). When they retreat into the water to feed, these enormous herds break up into smaller bands numbering as few as ten individuals so there is less competition for food. Male Walruses are almost double the weight of their female counterparts and have much longer tusks which can grow up to a meter in length and are used primarily for fighting with competitors for the most favoured breeding sites and the females that reside there. They are known to make a variety of vocal sounds including loud bellows during the mating season that are easily and loudly produced thanks to the two pouches of air in their necks.

Walruses most commonly breed in the middle of winter between the months of January and March. After a gestation period that lasts for around 15 months, a single pup is born on the ice measuring up to 1.2 meters long and weighing up 75kg. Walrus pups have short and soft hair covering their bodies, pale grey flippers and a thick, white moustache with no visible teeth. They suckle only on their mother’s milk for their first six months when they begin to eat more solid foods. After their first year, Walrus pups are almost triple the size they were at birth and begin to become more and more independent, although tend to remain very close to their incredibly protective mothers until they are two or three years old. Young females will often remain close to their mother but males begin to venture away from the herd to join all-male bachelor groups. Female Walruses are able to reproduce at around 6 or 7 years of age but males are not mature until they are at least 10 years old but will often not successfully reproduce until they can prove their dominance around 5 years later.

Walruses are carnivorous animals that only hunt and eat other animals in order to survive. They have a thick moustache containing roughly 450 very sensitive whiskers that help them to find food in the dark and murky waters at depths of around 100 meters below the surface. Walruses find almost all of their prey on the ocean floor and are known to expel streams of both air and water into the sediment to reveal food hidden under the sand. They feed primarily by sucking food into their mouths rather than using their teeth to chew on it and are even known to grip shellfish between their lips and suck the soft creature out from inside the shell, before spitting the shell out into the water. Walruses feed on a variety of different prey species including clams, snails, worms, squid, octopuses and even some species of slow-moving fish. Some Walrus populations are also known to hunt seals.

Due to the large size and aggressive nature of these marine mammals, Walruses have few predators in their natural environments with the exception of pods of Killer Whales and the occasional brave Polar Bear, as they can easily defend themselves with their enormous tusks. Humans are the most common predators of the Walrus as they are hunted for the meat, skin and oil by local populations (along with the less desirable hunting of them for their ivory from non-native people). They are also threatened in certain areas by water pollution including oil contamination that affects them directly but also through their prey, along with large fishing vessels that harvest the animals that the Walruses prey on and not only leave them with less food, but also cause severe noise pollution in the normally quiet and remote waters.

Walruses are incredibly well adapted to living in some of the coldest regions in the world with thick skin that covers a thick layer of blubber (fat) that helps to keep them warm. Their enormous tusks were originally thought to aid them when feeding but are know known to be more do with social status and even help with mobility. Walruses dig their tusks into ice floes to help them haul their enormous bodies out of the water but also anchor their tusks into the ice so they are able to sleep whilst their bodies remain submerged beneath the waves. Walruses are also known to use their long and powerful tusks like a pick-axe to carve their way through the thick ice. Walruses feed in the darkness of the ocean floor and are known to commonly dive to depths of between 80m and 100m for nearly half an hour at a time. However, recent studies show that depending on the availability of prey, Walruses have been known to reach much deeper depths of up to 180 meters below the surface of the water.

For thousands of years, local people have thought of Walruses as being very similar to humans as they are known to display qualities of intelligence, are slow to reproduce and take long and very good care of their more vulnerable young. Walruses have also been hunted by people in their native countries for thousands of years as a good source of food but in more recent years they have also been increasingly hunted for the ivory in their tusks, which is considered to be second in both size and quality only to those of elephants. Large scale hunting has decimated Walrus populations, particularly in certain areas but it is also increasing amounts of pollution that is having a devastating effect on wild populations.

Today, the Walrus is considered to be species that is Near Threatened in its natural environment although data is hard to gather on these bottom-feeding mammals. They have been declining in number since the 18th century with increasing levels of hunting and human activity and more recently are becoming increasingly threatened by the lessening amount of ice due to global warming. Although the exact population size is unknown, there are estimated to be between 200,000 and 250,000 individuals remaining in the freezing waters of the Arctic Circle.

View all 33 animals that start with W

Are Walruses herbivores, carnivores, or omnivores?

Walruses are Carnivores, meaning they eat other animals.

What Kingdom do Walruses belong to?

Walruses belong to the Kingdom Animalia.

What class do Walruses belong to?

Walruses belong to the class Mammalia.

What phylum to Walruses belong to?

Walruses belong to the phylum Chordata.

What family do Walruses belong to?

Walruses belong to the family Odobenidae.

What order do Walruses belong to?

Walruses belong to the order Carnivora.

What type of covering do Walruses have?

Walruses are covered in Hair.

What genus do Walruses belong to?

Walruses belong to the genus Odobenus.

Where do Walruses live?

Walruses live in the Arctic Circle.

In what type of habitat do Walruses live?

What are some predators of Walruses?

Predators of Walruses include humans, killer whales, and polar bears.

How many babies do Walruses have?

The average number of babies a Walrus has is 1.

What is an interesting fact about Walruses?

Walruses inhabit the freezing waters of the Arctic Circle!

What is the scientific name for the Walrus?

The scientific name for the Walrus is Odobenus rosmarus.