It mainly eats mangos and coffee! Click through all of our Asian Palm Civet images in the gallery. 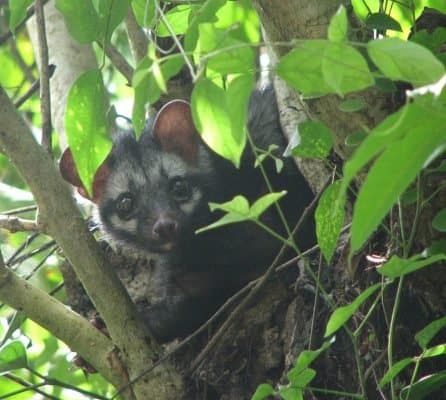 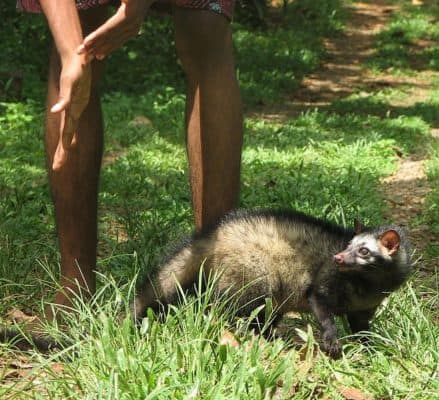 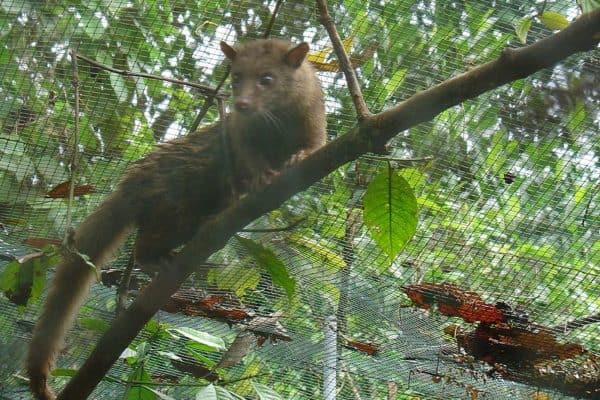 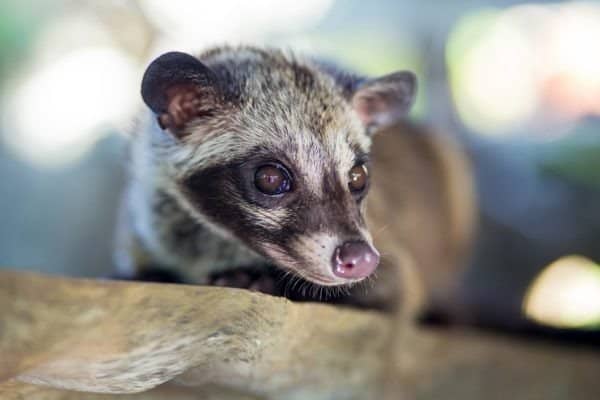 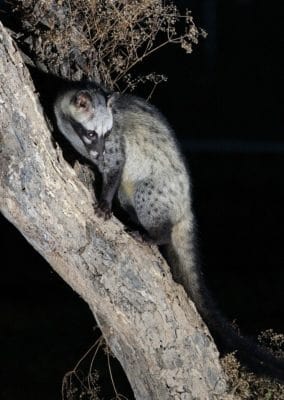 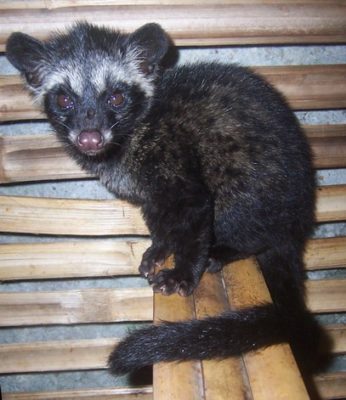 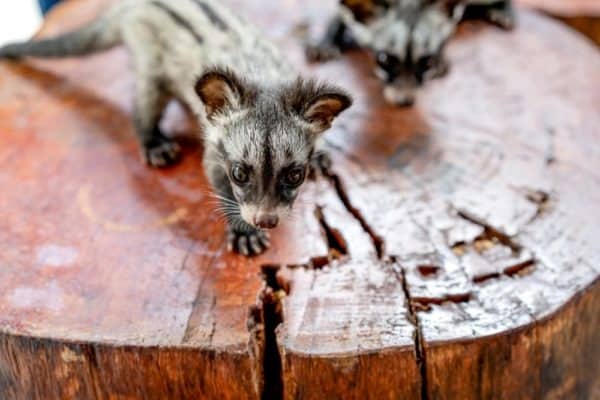 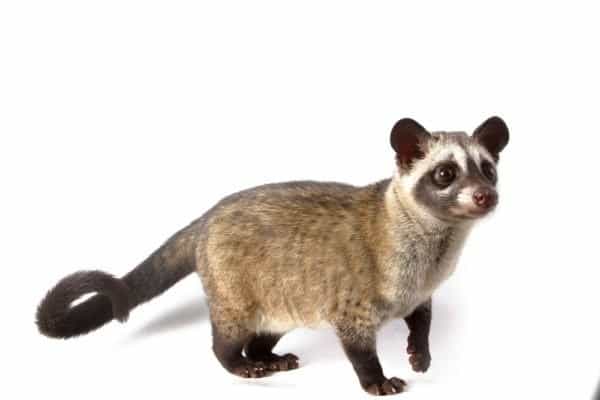 View all of the Asian Palm Civet images!

“Although not a cat, the Asian Palm Civet shares much in common with felines, including its hunting and tree-climbing.”

The Asian Palm Civet occupies a broad range that stretches across much of southern Asia, from India to China. These creatures are most closely related to mongeese and weasels. Civets climb trees both to escape from other predators and to hunt. The most serious threat that these creatures face today is habitat loss, much of it due to deforestation related to palm oil plantation development.

The Asian Palm Civet’s scientific name is Paradoxurus Hermaphroditus. Paradoxurus is a Latin word that means “palm civets”. Hermaphroditus is also a Greek term that comes from the mistaken perception that these creatures are intersex because of scent glands resembling testicles under the tail that are present in both genders. Males and females emit different types of scents with these glands, although the way they mark their territory is similar, leading to misconceptions about the species being intersexed.

These civets are most commonly found in Southeast Asia, southern China, Sri Lanka, and southern India. Despite the common nickname of “toddy cat”, civets are viverrids unrelated to felines. These furry creatures have long bodies, including the tail, and may have coat colors in brown, tan, gray, white, yellow, or black, with facial banding similar to a raccoon that may also include the muzzle area.

The average weight for the Civet is 1.4 to 2.5kg (3 to 10 lbs). These animals weigh about half the weight of their African counterparts. The Large Indian Civet, one of the next closest species in size, is more than twice the weight of most Asian Palm Civets, with a noticeably larger profile.

Large eyes are one of the distinguishing characteristics of this species, which helps enable easier nocturnal hunting in the jungle environment where they live. These scvets have a leaner build than many other civet species. These animals are built to scale trees very easily, as well as an escape from predators they may encounter in their jungle environment.

The elongated muzzle of an Asian Palm Civet, combined with sharp teeth, makes it easier for these animals to catch their prey. Palm civets’ small size makes them somewhat vulnerable to larger predators, despite their speed and agility. Their strong claws make scaling trees to escape from threats easier and can help them grasp their food more easily.

These civets are solitary animals for the most part, except when mating. These viverrids use a lot of scent-marking on the ground with the glands contained under the tail. The animals have sensitive-enough noses that they can easily identify other civets by the scents they leave behind with these glands.

These animals easily live in both terrestrial and arboreal environments, with more of a tendency towards nocturnal behavior. The species is nocturnal enough that there has been relatively little daytime behavior observation in the wild. When possible, these animals prefer to make their homes in forests with denser tree cover.

These civet’s historical range has included the tropical rainforests of southern India, Sri Lanka, southern China, and other arboreal forest areas of Southeast Asia. Because of their tropical environment, they are able to manage warm temperatures very well. The high humidity of these regions is something that these animals have all adapted to very well.

This species has been threatened by the bushmeat and pet trades, as well as being captured for the Kopi Luwak coffee trade, which uses coffee beans fermented in a palm civet’s digestive tract. Deforestation due to logging and clearing for palm oil plantations are also threats to this unique species. A loss of habitat disrupts the animal’s ability to find as much food and maintain viable breeding populations.

Despite deforestation, the musang has shown a high degree of adaptability. In areas that have undergone a lot of logging, Asian Palm Civets often go to gardens and parks with a lot of fruit trees. Some Sri Lankan homeowners have had issues with civets taking up residence in their attics, and interaction with humans in settled areas will likely become more common as territory loss continues.

When Asian Palm Civets eat fruits, they are likely to consume berries. When these animals eat other fruits, they prefer pulpy varieties.

The biggest threats to Palm Civets and other musang species include big cats like leopards, tigers. Crocodiles may also pose a threat, as well as larger snakes.

Humans are the species that pose the greatest threat to luwak and other civet species. Habitat loss due to the palm oil and logging industries has been a major issue of concern. Capturing these animals for the pet trade, for their meat, and for Kopi Luwak coffee production also remain threats of concern.

Relatively few people have witnessed Asian Palm Civets mating, but enough is known to understand that they are a solitary animal, except when mating. A male will usually mount a female for about five minutes several times before going back to their separate territories. The gestation period lasts about two months, with two to four offspring called pups per litter.

Asian Palm Civet pups are weaned and ready to be independent by three to four months, reaching reproductive age at a year old.

Asian Palm Civets can live 15 to years years in the wild, although it is unknown how many of these animals reach this age. Ages of up to 22 years in captivity have been reported.

The Asian Palm Civet is considered a “Vulnerable” animal. The population has declined due to human activity. However, they have a widespread distribution and an ability to adapt by relocating to higher less-affected areas.

Asian Palm Civets, although not openly hostile to people, have a muzzle that easily accommodates sharp teeth, as well as sharp claws. These features make a civet possibly dangerous if cornered. If encountered in the wild, their space should be respected.

What are other names for an Asian Palm Civet?

These animals may also be referred to as a toddy cat, a musang, or a luwack. The names used may vary by country.

Can civets be pets?

Civets can and have been kept as pets. However, they require very patient, understanding owners. People who have what it takes to share a home with one of these creatures often report everyone being happy with the situation.

An Asian Palm Civet has a musky odor that serves a mostly defensive purpose, as well as using the scent to mark its territory. The scent is often compared to the musk scent used in some colognes and perfumes.

Is an Asian palm civet a cat?

An Asian palm civet is not a cat, nor is it related to any feline species. The toddy cat nickname that people often use for civets comes from their fondness for palm flower sap, used to create a liquor called toddy.

What is the scientific name for the Asian palm civet?

Asian Palm Civets’ scientific name is Paradoxurus Hermaphroditus. This name comes from a combination of the Greek words for palm civets and for its perception as an intersexed animal.

Asian Palm Civets are Carnivores, meaning they eat other animals.

What Kingdom do Asian Palm Civets belong to?

What phylum do Asian Palm Civets belong to?

What class do Asian Palm Civets belong to?

What family do Asian Palm Civets belong to?

What order do Asian Palm Civets belong to?

What type of covering do Asian Palm Civets have?

In what type of habitat do Asian Palm Civets live?

What is the main prey for Asian Palm Civets?

What are some predators of Asian Palm Civets?

Predators of Asian Palm Civets include lions, snakes, and leopards.

What are some distinguishing features of Asian Palm Civets?

How many babies do Asian Palm Civets have?

The average number of babies an Asian Palm Civet has is 2.

What is an interesting fact about Asian Palm Civets?

What is the lifespan of a Asian Palm Civet?

What is the lifespan of a Asian Palm Civet?

How to say Asian Palm Civet in ...